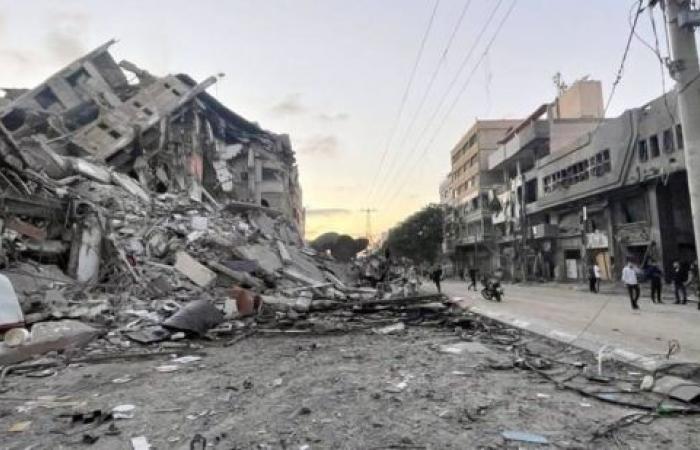 We show you our most important and recent visitors news details UN urges greater aid access for Gaza, ‘intensification of mediation efforts’ to end Israel-Palestine violence in the following article

Hind Al Soulia - Riyadh - GENEVA — The international community must do “all it can” to de-escalate the violence in Gaza and Israel which has left hundreds dead and injured, said the UN’s political affairs chief on Tuesday, calling on all those involved in the fighting to allow for the “intensification of mediation efforts”, which can also help stem a growing humanitarian crisis in the Gaza Strip.

Rosemary DiCarlo was addressing a meeting of the UN Forum on the Question of Palestine, and noted that the UN has been “actively involved” in mediation so far, and said the fighting involving extremist group Hamas and Israeli forces, which has claimed the lives of more than 200 civilians on both sides, including children, was a “tragic reminder” of the need to find a resolution to end conflict between Palestinians and Israelis, “once and for all.”

“In the absence of such a process, we are — regrettably — bound to witness more episodes of tensions and desperation. People on both sides deserve much more than that,” said DiCarlo.

The forum was organized by the UN Committee on the Exercise of the Inalienable Rights of the Palestinian People which met online in New York.

She noted that the scenes of communal violence inside Israel itself, were also “unprecedented”, saying continued escalation there would have “devastating consequences” for all in the region.

If the nine days of spiraling violence so far continues, “humanitarian needs are bound to rise considerably, particularly in Gaza, where the situation was already desperate”, she added.

More than 220 people have now died in Gaza and the West Bank since violence erupted last week with Israel, where the toll has risen to 10 dead, UN humanitarians said earlier on Tuesday, in a call for greater access to the Occupied Palestinian Territory and an end to hostilities.

“There are combined in the West Bank and Gaza Strip more than 6,000 injured. In Israel, the casualty count tragically as well, as of yesterday, stood at 10 total deaths and nearly 800 injured...due to Palestinian rocket attacks from highly populated civilian neighborhoods into civilian populations centers in Israel.”

Nearly 60,000 people have also had to leave or flee their homes in Gaza, the OCHA spokesperson said, with 47,000 now sheltering in UN Relief and Works Agency (UNWRA) schools.

The development comes as the World Food Program (WFP) also warned on Tuesday that the crisis has pushed an estimated additional 160,000 people in Gaza into food insecurity.

As of Monday, 132 buildings including 621 housing and commercial units have been destroyed in Gaza, according to the Ministry of Public Works and Housing. An additional 316 housing units have been severely damaged and rendered uninhabitable, Laerke noted.

Health care professionals and medical facilities are also in danger, according to the World Health Organization (WHO).

“In the Gaza Strip, 19 health facilities have been damaged including destruction of the Hala Al-Shawa primary healthcare clinic,” said WHO spokesperson Dr. Margaret Harris.

“In the West Bank, 41 health workers have been injured and 21 health vehicles damaged. The severe damage to the roads and infrastructure makes access to many of the hospitals very, very difficult.”

In a statement released on Tuesday afternoon, the UN relief chief who heads OCHA, Mark Lowcock, said the hostilities "must stop", and were brining nothing but "death, destruction and widespread trauma" to all in occupied Palestinian territories and Israel.

He called for international humanitarian law to be respected, "including the fundamental principles of distinction, proportionality and precaution. All parties must take constant care to spare civilians and civilian objects from harm."

Lowcock said he was deeply troubled by reports of high-frequency Israeli bombardments, noting there was "no safe place" in Gaza where two million people have in effect, "been forcibly isolated from the rest of the world, for over 13 years", adding that indiscriminate rocket attacks into Israel by armed militants, must also end.

Dr. Harris added that there was also a drastic lack of medicines and materials in the Gaza Strip, with less than one month’s supply, while physical distancing to prevent COVID-19 transmission was “almost impossible”, amid ongoing destruction.

In addition, concerns have continued to mount over the deteriorating situation for Gaza residents, where power is only available for six to eight hours per day, owing to damaged feeder lines and networks.

This has disrupted the provision of healthcare and other basic services, including water, hygiene, and sanitation.

Crossing opens, but closes within hours

Against this backdrop, OCHA welcomed the opening of the Kerem Shalom crossing into Gaza for essential humanitarian supplies nine days into the crisis.

The transit point in southern Gaza was closed eight days ago, along with the Erez crossing in the north of Gaza, OCHA said in a statement on Monday.

“In days to come, humanitarian access into and out of Gaza for staff and goods must be sustained and appropriate measures taken to ensure safe movements within Gaza,” the OCHA spokesperson added.

UPDATE: Israeli authorities announced just hours after the crossing opened that they were shutting down the Kerem Shalom crossing, blaming militants who they said launched mortars at the crossing. OCHA reported in a news update that only five of 24 humanitarian trucks scheduled to enter Gaza, had been able to get through. — UN News

These were the details of the news UN urges greater aid access for Gaza, ‘intensification of mediation efforts’ to end Israel-Palestine violence for this day. We hope that we have succeeded by giving you the full details and information. To follow all our news, you can subscribe to the alerts system or to one of our different systems to provide you with all that is new.