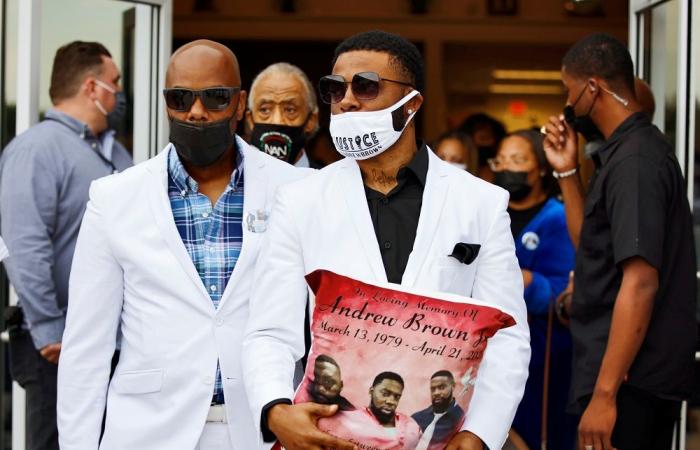 Hello and welcome to the details of Fatal shooting of Black man by US officers ‘justified’, says prosecutor and now with the details

WASHINGTON, May 19 — The fatal shooting last month of a Black man by law enforcement officers in the US state of North Carolina was “justified” and no one will face charges, the prosecutor in charge of the case, which has drawn scrutiny, said Tuesday.

The death of Andrew Brown “while tragic, was justified” because his actions led the sheriff’s deputies “to reasonably believe it was necessary to use deadly force to protect themselves and others,” Pasquotank county district attorney Andrew Womble said.

Womble, who was revealing the results of a state investigation, said seven officers went to Brown’s home in Elizabeth City on April 21 — they had arrest and search warrants related to alleged felony drug offenses.

Brown, 42, was in his car outside the home when they arrived. Deputies, their weapons drawn, surrounded the car and asked him to exit, but Brown attempted to drive away.

“The decision to flee, which Brown made on his own, quickly escalated the situation from a show of force to an employment of force,” Womble said, adding that Brown had steered his vehicle towards one of the officers.

“The facts of this case clearly illustrate the officers who used deadly force on Andrew Brown, Jr did so reasonably, and only when a violent felon used a deadly weapon to place their lives in danger.”

“No officer will be criminally charged,” Womble said.

In the space of 44 seconds, officers fired 14 shots, at the vehicle and then at the rear of the vehicle after Brown turned it around. An autopsy revealed that two of those bullets hit Brown, one of them fatally to the neck.

The family had previously revealed the cause of death, based on an independent autopsy. Brown’s son Khalil Ferebee said last month that his father had been “executed.”

‘Slap in the face

On Tuesday, attorneys for the Brown family released a statement decrying what they called Womble’s “attempt to whitewash this unjustified killing” and calling on the Justice Department to weigh in on the case.

“To say this shooting was justified, despite the known facts, is both an insult and a slap in the face to Andrew’s family, the Elizabeth City community, and to rational people everywhere,” the statement said.

Police use of lethal force against Black Americans has come under increasing scrutiny, especially in the wake of last year’s killing of George Floyd in Minneapolis, sparking protests across the United States and abroad.

A white former officer has been convicted of Floyd’s murder.

Brown’s death came in the aftermath of that ruling, and was also followed by protests in Elizabeth City, which has a population of about 20,000.

The city’s mayor declared a state of emergency on Monday and put in place a curfew for several nights in anticipation of possible violent demonstrations.

Initially, authorities refused to release body cam footage, which fuelled speculation about wrongdoing, but Womble released some of that video on Tuesday, which confirmed the number of officers at the scene, and Brown’s attempt to flee.

It was not immediately clear from the footage how fast Brown was going and if police were directly in the path of the vehicle. — AFP

These were the details of the news Fatal shooting of Black man by US officers ‘justified’, says prosecutor for this day. We hope that we have succeeded by giving you the full details and information. To follow all our news, you can subscribe to the alerts system or to one of our different systems to provide you with all that is new.

PREV ‘Early stages’ of coronavirus third wave amid Delta variant surge: WHO chief
NEXT More than 30 dead after floods in Germany and Belgium