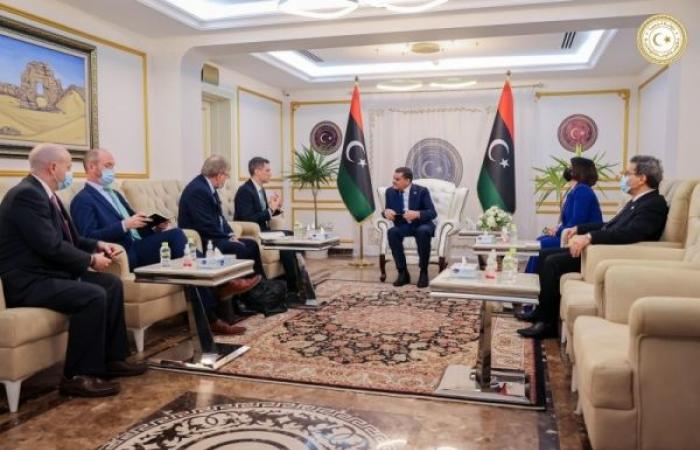 During his visit, US Acting Assistant Secretary of State for Near Eastern Affairs Joey Hood was accompanied by US Special Envoy for Libya Richard Norland.

Upon arrival in the war-hit Libyan capital, Hood affirmed the American support of Libya's transitional authorities and called an end to foreign military intervention in the North African country.

Hood and Ambassador Norland late met with Libyan interim Prime Minister Abdulhamid Dabaiba, Foreign Minister Najla Mangoush, head of the Presidential Council Mohamed Menfi, and president of the High National Electoral Commission Dr. Emad Al-Sayah, according to a statement from the US Department of State.

They discussed areas of mutual interest, including a Libyan-led, inclusive, and negotiated political solution to the conflict, facilitated through the UN and full implementation of the Oct. 23 Libyan ceasefire agreement, the statement added.

The US acting assistant secretary of state later held a press conference with the Libyan foreign minister on Tuesday.

“Today’s meetings demonstrate the commitment of the US government and our strong diplomatic support for the progress the Libyan people have made towards an inclusive negotiated political solution,” Hood said at a joint news conference with Manqoush.

“We urged the US to help us pressure all concerned parties to meet their obligations, respect UN resolutions and support the ceasefire,” said Manqoush during the press conference. — Agencies

These were the details of the news Senior US diplomat visits Libya to support interim government for this day. We hope that we have succeeded by giving you the full details and information. To follow all our news, you can subscribe to the alerts system or to one of our different systems to provide you with all that is new.