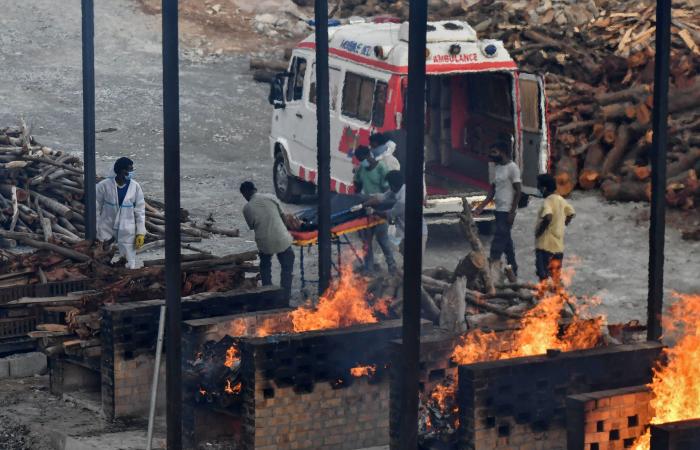 Mohamed Nass - Cairo - Prime Minister Narendra Modi sounded the alarm over the rapid spread of COVID-19 through India’s vast countryside on Friday, as 4,000 people died from the virus for the third straight day and total infections crossed 24 million.

India is in the grip of the highly transmissible B.1.617 variant of the coronavirus, first detected there and now appearing across the globe. Modi said his government was “on a war footing” to try to contain it.

“The outbreak is reaching rural areas with great speed,” he said, addressing farmers in a virtual conference. “I want to once again warn all … those who live in villages about corona.”

Although about two-thirds of Indians live in rural towns and villages where healthcare facilities are limited, it was the first time Modi has specifically referred to the virus’s spread through the countryside since a second wave erupted in February.

“All departments of the government, all resources, our armed forces, our scientists, everyone is working day and night to counter COVID, together,” he said.

Eid festivities celebrated by India’s around 200 million Muslims to mark the end of Ramadan were generally subdued on Friday. Most states have imposed full or partial lockdowns and many mosques were either shut or following social distancing measures during prayers.

“The good thing is that everyone is following and celebrating Eid inside their homes,” Maulana Khalid Rashid, a cleric in the city of Lucknow, told ANI news agency, a partner of Reuters.

Television has broadcast images of families weeping over the dead in rural hospitals or camping in wards to tend the sick, while bodies have washed up in the Ganges as crematoriums are overwhelmed and wood for funeral pyres is in short supply.

Medical journal The Lancet said restrictions on movement along with international support measures were urgently needed to stem “an unprecedented public health crisis”.

Modi has been under pressure to impose a national lockdown, though on Thursday the president of the Public Health Foundation of India questioned whether that would be effective in India.

“We recognise… the anxieties that are displayed by international observers… but you can’t wrap all of India into one blanket,” K. Srinath Reddy told a panel discussion.

Health ministry data recorded 4,000 deaths and 343,144 new infections over the last 24 hours, below last week’s peak of 414,188. Total infections since the pandemic struck India more than a year ago crossed 24 million, with 262,317 dead. Experts say the true figures are much higher, with a lack of access to tests and treatment meaning many cases go uncounted.

Modi has faced criticism over his leadership during the pandemic, having allowed a huge Hindu gathering to take place in northern India in February and addressed political rallies in April, blamed for spreading the virus to rural areas.

The fast-spreading variant first found in India has caused alarm around the globe. It has led to big outbreaks in neighbouring states such as Nepal, and has also been detected far afield in Britain, the Americas and elsewhere in Asia.

Yamini Mishra, Asia-Pacific director of rights group Amnesty International, said the virus was “spreading and transcending borders at a frightening speed” and would hit the region’s most marginalized populations hardest.

The catastrophe unfolding in India and Nepal should also be a warning to other countries the region “to invest heavily in surge capacity for an emergency response,” she said.

Modi allowed all Indian adults to request vaccines from May 1.But while India is the world’s largest vaccine producer, the huge demand has left it low on stocksand vaccinations have slowed down.

As of Friday, it had fully vaccinated just over 39.4 million people, or around 2.9% of the population. The government has promised to accelerate the vaccine programme dramatically in coming months.

More than 2 billion doses of vaccine are likely to be available between August and December, government adviser V.K. Paul told reporters. Those would include 750 million doses of AstraZeneca’s vaccine, which is made by Serum Institute of India, as well as 550 million of Covaxin, developed by domestic producer Bharat Biotech.

Dr Reddy’s Laboratories Ltd (REDY.NS) said a first batch of Sputnik V vaccine imported from Russia received regulatory clearance on Thursday and the first dose was administered on Friday as part of a pilot.

Image: Volunteers carry the body of a person who died due to the coronavirus disease (COVID-19), at a crematorium ground in Giddenahalli village on the outskirts of Bengaluru, India, May 13, 2021. REUTERS/Samuel Rajkumar

These were the details of the news India ‘on war footing’ as coronavirus infections pass 24 mln for this day. We hope that we have succeeded by giving you the full details and information. To follow all our news, you can subscribe to the alerts system or to one of our different systems to provide you with all that is new.