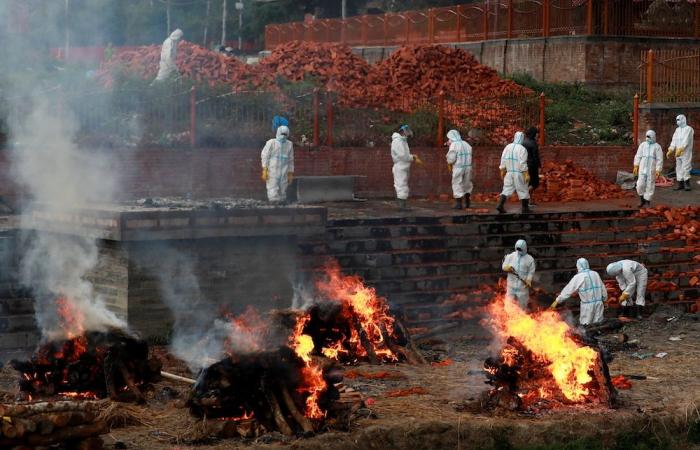 NEW DELHI, May 12 — India’s coronavirus death toll passed 250,000 on Wednesday but comparisons of official data with those from people on the frontlines suggested the true number is several times higher.

Across the vast nation, the devastating Covid-19 wave has overwhelmed hospitals with patients and crematoriums with bodies, and many coronavirus deaths are not being properly recorded as such.

“Even three to four times would be an underestimate,” Anant Bhan, an independent health policy and bioethics researcher, told AFP.

Harrowing images from overwhelmed crematoriums, graveyards, and even makeshift funeral pyres have highlighted the scale of the crisis.

Bodies of suspected Covid-19 victims have also been seen floating down the holy Ganges river.

In Rajkot in the west of the state, the official death toll between April 1-23 was 154, yet the city’s own health officials put it at 723.

And in Bharuch, the official count for the same period was just 23 but there were 600 funerals.

Gujarat’s chief minister Vijay Rupani insisted that the state was following guidelines from the Indian Council of Medical Research.

Those say only deaths directly caused by Covid-19 can be recorded as such, but not fatalities triggered by cormorbidities — when a patient had heart problems and dies of cardiac arrest, for instance.

Even before the pandemic, just 22 per cent of the nearly 10 million annual deaths in India were medically certified, and experts say the spike in funerals points to the same happening with Covid-19 fatalities.

The surge has pushed the Aishbagh Burial Ground in Lucknow, capital of Uttar Pradesh state, to the brink.

Hafiz Abdul Mateen from the graveyard told AFP it handled four to five burials a day before the pandemic.

“Today, 45 bodies of Covid victims have been buried here,” he said.

“We’ve increased the number of gravediggers but that’s also not enough as these men are getting tired and falling sick.”

The official figures for deaths in some other states including Uttar Pradesh and Haryana also do not align with the number of funerals.

Media reports have also suggested that the official numbers for the capital New Delhi also fall well short of the reality.

“Our estimate is 50 per cent of Covid-19 deaths are not registered by the government,” Jitender Singh Shanty, in charge of one of Delhi’s 26 crematoriums, told AFP.

Health economist and research Rijo M. John described the situation as a “battle for data, data sharing and transparency”.

But a spokesperson for India’s ruling Bharatiya Janata Party denied allegations of undercounting or political motivations behind the mismatch in fatality numbers.

“It is not possible for anyone to hide the numbers in this age and time,” RP Singh told AFP.

Despite the assurances, some are not convinced.

“There is massive underreporting of deaths and cases,” said college student Sonalika Sahay, 22.

“The government is saying the positivity rate is coming down and the situation is improving. How can it be possible when corpses are being dumped in rivers in dozens?” — AFP

These were the details of the news Doubts surround India’s official Covid-19 death toll for this day. We hope that we have succeeded by giving you the full details and information. To follow all our news, you can subscribe to the alerts system or to one of our different systems to provide you with all that is new.