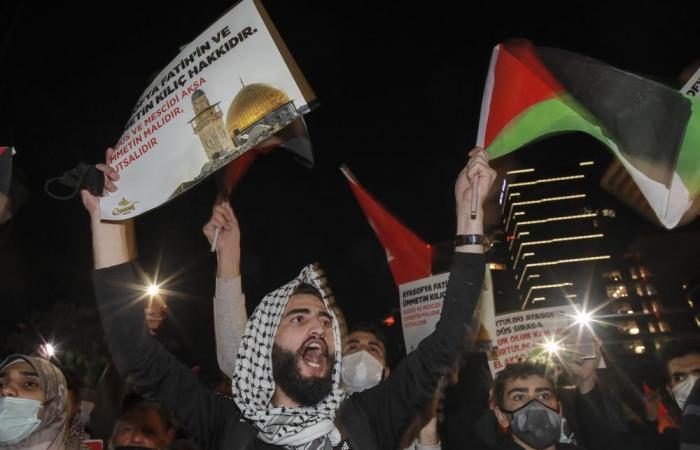 You are now following the details of the The Latest: Erdogan rallies Muslim leaders against Israel news and now we leave you with the details

Mohamed Nass - Cairo - JERUSALEM (AP) — The Latest on confrontations between Israelis and Palestinians, sparked by weeks of tensions in contested Jerusalem and as Israel has signaled it’s widening its military campaign:

ANKARA, Turkey — The office of Turkey’s president says he is engaged in intense telephone diplomacy in a bid to end Israel’s use of force against Palestinians.

Since late Monday, Recep Tayyip Erdogan has spoken to Malaysia’s king and the leaders of Qatar, Kuwait and Jordan, as he seeks a strong stance by Muslim nations against Israel, according to Erdogan’s office.

The Turkish president, who has has strongly denounced Israel’s actions against Palestinians at the Al-Aqsa Mosque compound during the fasting month of Ramadan, has also spoken to Palestinian President Mahmoud Abbas and Hamas chief, Ismail Haniyeh.

The latest round of fighting comes as Turkey has reportedly been seeking to restore ties with Israel. The two countries withdrew their ambassadors in 2018, after the United States moved its embassy from Tel Aviv to Jerusalem, sparking mass protests by Palestinians.

Late on Monday, thousands of protesters marched to Israel’s embassy in Ankara and the consulate in Istanbul to protest Israel, ignoring Turkey’s COVID-19 restrictions.

JERUSALEM — The Israeli military says it has assassinated a senior commander of the Islamic Jihad militant group in Gaza on Tuesday,

It said the militant was the head of the Islamic Jihad’s rocket unit and identified him as Samih al-Mamluk. The military said other senior militants in the organization were also killed in the same strike.

Islamic Jihad confirmed the three killed in an airstrike in an apartment in Gaza City were senior members of its armed wing. The militant group vowed retaliation.

ISLAMABAD — Pakistan’s prime minister has denounced Israel’s use of force against Palestinians at the Al-Aqsa Mosque compound during the fasting month of Ramadan.

Imran Khan said Tuesday that he had asked his foreign minister to contact his Turkish and Saudi counterparts to discuss how to collectively respond.

Under discussion is whether Pakistan, Saudi and Turkish officials should convene the Organization of Islamic Cooperation, a group of Islamic countries.

Pakistan is one of the few countries that have no diplomatic relations with Israel.

JERUSALEM — Israeli media reports that a rocket has struck an empty school in the coastal city of Ashkelon, not far from the Gaza Strip.

Television footage showed thick smoke rising from cars that had caught on fire.

Israel’s Home Front Command had ordered the closure of schools on Monday in the area surrounding the Gaza Strip, including Ashkelon. The move came during the escalation of tension that’s built for weeks over contested Jerusalem..

Since Monday, Gaza militants have fired hundreds of rockets toward Israel.

Israel has fired back. An airstrike has hit a high-rise building in the middle of Gaza City. Local media reported that Tuesday’s airstrike killed an unknown number of militants inside.

The strike in the middle class Rimal neighborhood sent terrified residents of the building into the streets. They included screaming women and children, some of whom were barefoot.

Earlier Tuesday, Israel hit a high-rise where it said a Hamas commander was hiding.

CAIRO — An Egyptian intelligence official says Egypt is engaged in “intensive” talks with Israel and Gaza militants on reaching a cease-fire to end the latest round of fighting.

The official said the efforts began in late April as the situation in Jerusalem worsened. He said Israeli actions, including the recent storming of the Al-Aqsa mosque and the planed evictions of Palestinian families from their homes in an east Jerusalem neighborhood, have frustrated the mediators.

The official says “the situation is changing rapidly,” but officials nonetheless hope to reach a truce before the Muslim holiday of Eid al-Fitr later this week. Egypt frequently mediates between Israel and Hamas.

The official spoke on condition of anonymity because he was discussing ongoing diplomatic efforts.

GAZA CITY, Gaza Strip — An Israeli airstrike has hit another high-rise building in the middle of Gaza City. Local media reported that Tuesday’s airstrike killed an unknown number of militants inside.

But the airstrike in the middle-class Rimal neighborhood in Gaza sent terrified residents of the building into the streets. They included screaming women and children, some of whom were barefoot.

Since Monday, Gaza militants have also fired hundreds of rockets toward Israel.

The escalation in the conflict was sparked by weeks of tensions in contested Jerusalem.

These were the details of the news The Latest: Erdogan rallies Muslim leaders against Israel for this day. We hope that we have succeeded by giving you the full details and information. To follow all our news, you can subscribe to the alerts system or to one of our different systems to provide you with all that is new.