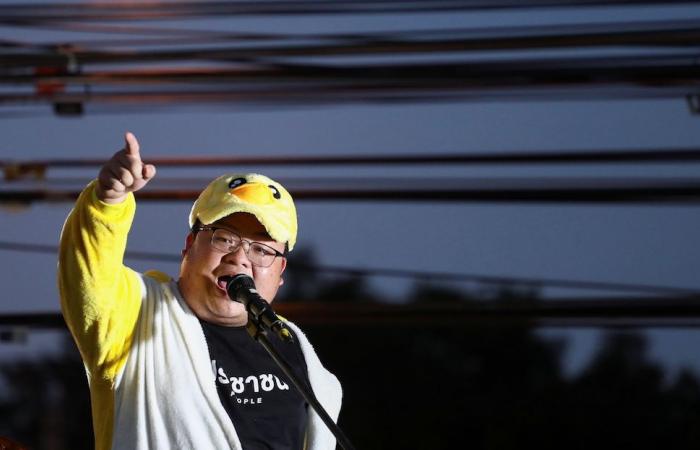 Parit Chiwarak, who goes by the nickname “Penguin”, had been remanded in custody since March when authorities indicted him under Thailand’s strict lese-majeste laws.

In late April he was transferred to hospital after losing 12 kilograms.

The university student faces 20 lese-majeste charges for his role in last year’s demonstrations against the Thai government, which called for reforms to Thailand’s monarchy.

“Parit has made a statement with free will that if he gets bail he will not carry out any action to dishonour the monarchy and will not attend any activity causing unrest. He will not leave the country unless the court gives permission,” the court said.

A bail hearing today for a third activist—Panupong “Mike” Jadnok, who is facing eight royal defamation charges—has been postponed because he is at risk of developing a coronavirus infection after coming in close contact with a positive case.

Eighty-six people from the democracy movement have fallen foul of Thailand’s strict royal defamation laws since July last year and are awaiting trial.

Those convicted can be sentenced to up to 15 years in jail per charge.

Student-led protests in Bangkok last year drew tens of thousands of people at their peak but the near daily rallies have petered out as Thailand grapples with a third wave of coronavirus infections and tighter restrictions on public gatherings.

She faces nine charges of insulting the monarchy but was also granted bail.

Another high-profile protest leader, human rights lawyer Anon Numpa, who is facing 12 charges, has been unable to apply for bail while he recovers from a coronavirus infection in hospital. — AFP

These were the details of the news Hunger-striking Thai democracy protest leader granted bail for this day. We hope that we have succeeded by giving you the full details and information. To follow all our news, you can subscribe to the alerts system or to one of our different systems to provide you with all that is new.