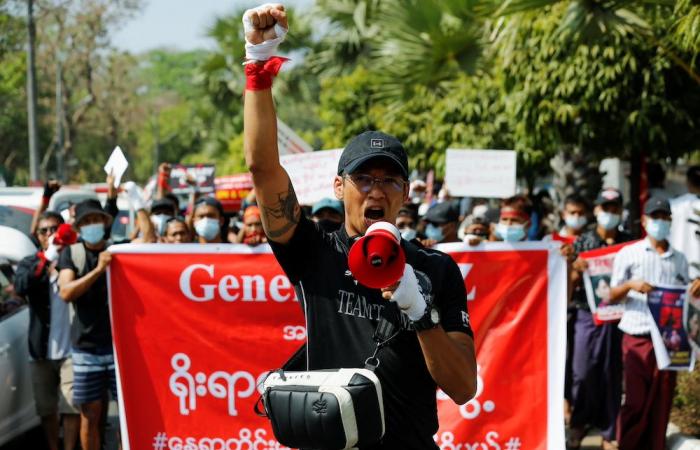 YANGON, May 10 — Myanmar’s mixed martial arts star Aung La N Sang — known as the “Burmese Python” — has spoken out in support of a fellow fighter injured in a bomb blast in their coup-hit homeland.

Myanmar has been in turmoil since February 1 when the military ousted civilian leader Aung San Suu Kyi from power, triggering a massive uprising as people across the nation demand a return to democracy.

Protesters take to the streets daily, civil servants boycotting work have left government operations crippled, and the junta have started blaming periodic bomb blasts across the country on “instigators”.

An explosion in a Yangon gym last week left MMA fighter Phoe Thaw with injuries, according to state media who blamed the blast on him and said he was arrested.

But Aung La N Sang, Myanmar’s most famous athlete, known for his powerful chokehold that earned him the nickname “the Burmese Python”, has defended Phoe Thaw on Instagram.

“As long as I’ve known him, he’s a gentleman and good-hearted human being... please try not to spread fake news and hate,” said the former ONE Championship middleweight and light heavyweight champion, who is currently based in the US.

“The fighting that we do in the circle is nothing compared to what’s going on with the people in Myanmar right now. Stay strong and stay united.”

Before his arrest, Phoe Thaw was among hundreds of celebrities and influencers wanted by the junta on charges of spreading news harming military personnel.

Vocal on social media, he regularly posted pictures of himself leading protests in Yangon.

After he was arrested, a photo was posted on Phoe Thaw’s Instagram feed on Friday showing him entering a ring, with the caption “I am strong” and the hashtag “Never give up”.

In response, Aung La N Sang commented: “I’m praying for you and thinking of you, brother.”

Despite his distance from Myanmar, Aung La N Sang has posted updates on his country’s situation, highlighting the arrests of civilians, the violence against protesters and the lost lives.

“Every day I wake up to more dark news of all the killing happening in Myanmar,” the ethnic Kachin fighter wrote in a March 27 post.

“We will never give up and we will keep fighting as long as we breathe. Pray for all the tribes and people in Myanmar.”

Since the coup, at least 780 civilians have been killed by security forces, according to a local monitoring group.

The junta has a much lower number, and blames the violence on “rioters”. — AFP

These were the details of the news Myanmar’s ‘Burmese Python’ defends MMA fighter arrested by junta for this day. We hope that we have succeeded by giving you the full details and information. To follow all our news, you can subscribe to the alerts system or to one of our different systems to provide you with all that is new.