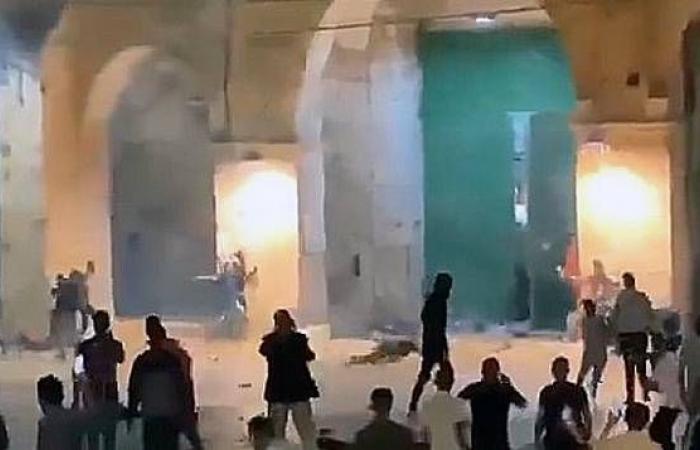 Hind Al Soulia - Riyadh - JERUSALEM — At least 90 Palestinians were injured on Saturday night as Israeli police clashed with protesters outside Jerusalem's Old City during the holiest night of Ramadan, according to the Palestinian Red Crescent.

The unrest came a day after violent clashes at the Al-Aqsa mosque compound in which Palestinian medics said more than 200 Palestinians were wounded.

Early Sunday, the Israeli military said Palestinian militants in the Gaza Strip fired a rocket at the country's south that fell in an open area.

In response, aircraft struck a military post for Hamas, the militant group ruling the territory. There were no reports of casualties in either attack.

Tensions were high in the city as thousands of Muslim worshipers returned on Saturday to mark Laylat Al-Qadr, the most sacred night of the month of Ramadan, at the city’s Al-Aqsa mosque.

Dozens of buses filled with Israeli Arab citizens were stopped on the main road heading into Jerusalem for what officials said were security checks, prompting passengers to block traffic and pray on the highway in protest.

Friday night’s violence left 83 people wounded by rubber-coated bullets, according to the Palestinian Health Ministry, including two with serious head injuries and two with broken jaws.

Israeli police said 18 of its officers had been wounded by stones, fireworks and other objects hurled at them.

Police commissioner Yaakov Shabtai said he had ordered up reinforcements ahead of Laylat al-Qadr, saying “the right to demonstrate will be respected but public disturbances will be met with force and zero tolerance. I call on everyone to act responsibly and with restraint.”

Tensions have been growing in Jerusalem over the authorities’ threat to evict dozens of Palestinians embroiled in a legal battle with Israeli settlers over property in East Jerusalem.

An Israeli court is expected to issue a verdict on the evictions on Monday.

The so-called Quartet, which includes the US, European Union, Russia and United Nations, also expressed concern. The Arab League scheduled an emergency meeting on Monday.

Earlier on Saturday both the European Union and United States called for calm in the city.

The European External Action Service said in a statement: “The European Union calls on the authorities to act urgently to de-escalate the current tensions in Jerusalem."

“Acts of incitement around the Temple Mount/Haram Al-Sharif must be avoided and the status quo has to be respected.”

The actions of Israeli police were condemned this weekend by countries including Egypt, Jordan, Bahrain and Turkey — all of which have diplomatic relations with Israel. — Euronews

These were the details of the news 90 Palestinians wounded as unrest continues in East Jerusalem for this day. We hope that we have succeeded by giving you the full details and information. To follow all our news, you can subscribe to the alerts system or to one of our different systems to provide you with all that is new.