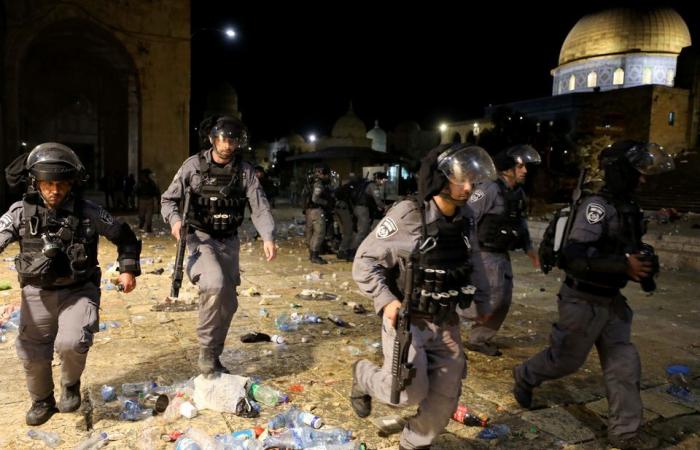 The clashes at Islam’s third holiest site and around East Jerusalem, which injured 205 Palestinians and 17 police officers, came amid mounting anger over the potential eviction of Palestinians from homes on land claimed by Jewish settlers. read more

As the clashes flared, several Turkish officials criticized Israel and called for other countries to voice condemnation, while a Foreign Ministry statement urged Israel to “immediately end its provocative and hostile stance and act with reason”.

“Shame on Israel and those who keep silent in the face of disgraceful attacks,” Turkish Presidential Spokesman Ibrahim Kalin said on Twitter late on Friday.

“We call on everyone to stand up against the policies of occupation and aggression of this apartheid state,” he said.

“Attacking innocent people praying is clearly terror,” Altun said. “We see that these attacks on Palestinians are against the most fundamental human rights.”

Former allies Turkey and Israel have had a bitter falling-out in recent years despite strong commercial ties, mutually expelling ambassadors in 2018.

Ankara has repeatedly condemned Israel’s occupation of the West Bank and its treatment of Palestinians, calling the issue a “red line”.

Last month, Turkey also condemned what it said was Israel’s “systematic attempt at evicting Palestinians”, referring to the long-running legal case that Israel’s Supreme Court will hold a hearing over on Monday.

These were the details of the news Turkey accuses Israel of ‘terror’ over Palestinian clashes at Al-Aqsa for this day. We hope that we have succeeded by giving you the full details and information. To follow all our news, you can subscribe to the alerts system or to one of our different systems to provide you with all that is new.