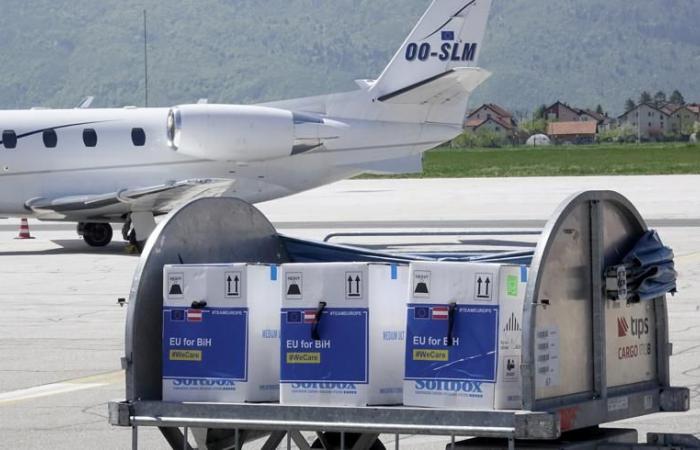 You are now following the details of the Unsure vaccine waiver will help, some leaders urge exports news and now we leave you with the details

Mohamed Nass - Cairo - GENEVA (AP) — European leaders voiced increasing skepticism Friday that a US proposal to lift patent protections on COVID-19 vaccines would solve the problem of getting shots into the arms of people in poorer countries, with some instead calling for more exports of the doses already being produced.

While activists and humanitarian groups have cheered the Biden administration’s decision and urged others to follow suit, European Union leaders are hammering home the message that any benefit from a temporary waiver of intellectual property protections would be long in coming. Instead, they’ve taken the US, in particular, to task for not sharing more vaccines with the rest of the world.

“You can give the intellectual property to laboratories that do not know how to produce it. They won’t produce it tomorrow,” said French President Emmanuel Macron at a summit in Portugal, even though he has also said he would agree to waive the protections.

EU officials insist rewriting rules in the World Trade Organization could take months or even a year, and say they’ve found few examples — if any — that intellectual property issues are what’s holding up the rollout of vaccines.

Supporters of a patent waiver have argued it would allow more factories around the world to produce the shots, increasing the supply, especially in poorer countries. The decision ultimately is up to the 164-member WTO, and if just one country votes against a waiver, the idea will fail.

Macron said the key issues are really donations and exports — an argument also made by the pharmaceutical industry — and he said the United States should do more on that front.

The US does not have an export ban on vaccines nor does it prohibit the export of ingredients for the shots. But the federal government controls hundreds of millions of doses manufactured in the country under the terms of its contracts with drug makers, and is first in line for some raw materials produced by US suppliers.

The US has sent Canada and Mexico about 4 million doses from its stockpile of vaccines from AstraZeneca — which hasn’t yet applied for authorization in the US — and it plans to begin exporting as many as 60 million doses in coming months. Last week, the US also redirected some raw materials used for AstraZeneca to India as part of its relief efforts for the hard-hit country.

Macron boasted, however, that almost half of the doses produced on in the European Union — or about 200 million — have been allowed to be exported.

“We are the most generous in the world of developed nations,” he said.

White House press secretary Jen Psaki told reporters Friday that the US is going to “work with international partners, with the pharmaceutical companies to up the supply, to get as much supply out to the global community as possible.”

WTO Director-General Ngozi Okonjo-Iweala echoed some of the sentiments expressed by European leaders at a virtual conference Friday, noting that lifting patent protections could help expand fair access to vaccines but might not be the most “critical issue” in expanding vaccine production.

Other key steps include reducing restrictions on the export both of vaccines and the ingredients needed to make them, sharing the know-how behind the shots, training manufacturing personnel and increasing manufacturing capacity globally.

Meanwhile, Germany, a research powerhouse with strong biotech and pharmaceutical sectors, spoke out against waiving the protections — and also urged more exports.

Instead, he stressed that developed countries whose vaccination campaigns are going well should export more shots.

“We’ll be exporting a lot more,” he said. “I can only welcome if the United States change their policy and make vaccination doses available for other countries.”

“We can’t basically wait for months for this waiver to be finalized,” she said. Hassan said the countries that have “overordered” vaccines are “ironically blocking the waiver and the ability of people in low income parts of the world to access the vaccines.”

By NICOLE WINFIELD and JAMEY KEATEN

Image; FILE – In this May 4, 2021, file photo, a container with boxes of the Pfizer vaccine for COVID-19 is delivered at the Sarajevo Airport, Bosnia. The head of the World Trade Organization said Friday, May 7, the U.S. administration’s call to remove patent protections on COVID-19 vaccines could help expand fair access to vaccines but might not be the most “critical issue,” as officials in Europe increasingly insisted that more vaccine exports are the more pressing priority. (AP Photo/Eldar Emric, File)

These were the details of the news Unsure vaccine waiver will help, some leaders urge exports for this day. We hope that we have succeeded by giving you the full details and information. To follow all our news, you can subscribe to the alerts system or to one of our different systems to provide you with all that is new.