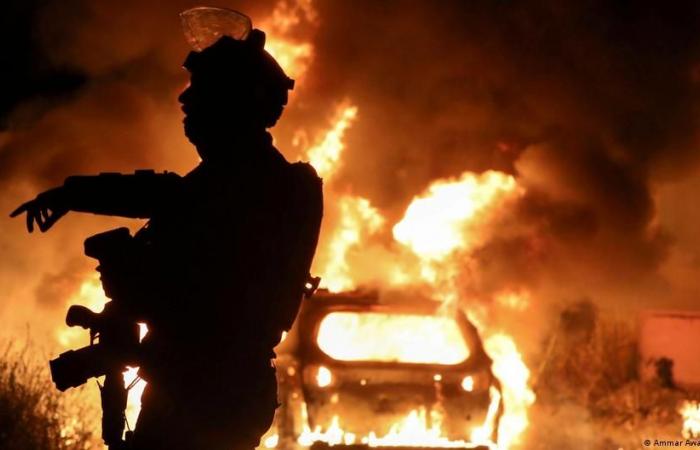 You are now following the details of the East Jerusalem: 15 Palestinians arrested in land right clashes news and now we leave you with the details

Tensions have heightened in recent days in Jerusalem as a legal battle with Israeli settlers put dozens of Palestinians at risk of eviction.

Police said Palestinian protesters were setting off fireworks and throwing stones at officers and vehicles early on Friday in the Sheikh Jarrah neighborhood.

Palestinian media reported that Israeli settlers and police had attacked a Palestinian vigil in Sheikh Jarrah early on Friday.

What are the land right cases?

Located in the Arab eastern part of Jerusalem, the neighborhood has been the center of property disputes for decades.

Both Israeli settlers and Palestinians claim ownership in Sheikh Jarrah.

A Supreme Court decision in a property case involving four Palestinian families was expected next week.

Supporters of the families have been gathering in the neighborhood for days to break their Ramadan fast with their communal outdoor sunset iftar meal.

In recent years, forced evictions of Palestinian homes have repeatedly led to protests.

Clashes in Jerusalem in the past weeks have prompted violence elsewhere.

Israeli forces said they shot and killed two Palestinian gunmen after the men opened fire on a border police base in the occupied West Bank.

“Three terrorists fired towards the Salem border police base,” an Israeli statement said. The third attacker was in a “critical condition” after he was also shot.

Earlier this week, Israeli forces killed a 16-year-old Palestinian during a confrontation near the West Bank city of Nablus.

On Thursday, a Palestinian was arrested over a drive-by shooting in the West Bank that killed an Israeli and wounded two others.

The United Nations urged Israel on Friday to call off forced evictions in east Jerusalem, warning that its actions could amount to “war crimes,” AFP news agency cited  a spokesman as saying.

Israel also received criticism over a decision to build 540 settlement units in the West Bank. Germany, the UK, France, Spain, and Italy called on Israel to stop the construction of illegal settlements in occupied Palestinian territories.

These were the details of the news East Jerusalem: 15 Palestinians arrested in land right clashes for this day. We hope that we have succeeded by giving you the full details and information. To follow all our news, you can subscribe to the alerts system or to one of our different systems to provide you with all that is new.