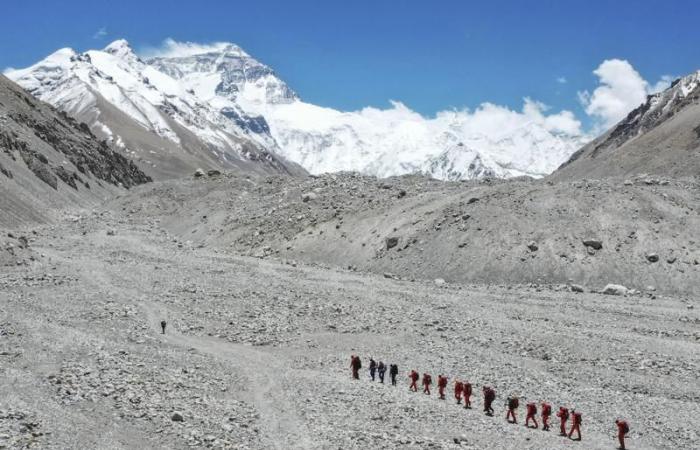 Mohamed Nass - Cairo - BEIJING (AP) — China has opened Mount Everest’s northern slope to a few dozen mountaineers who will be tested for the coronavirus and must keep their distance while ascending the world’s highest peak.

Both Nepal and China closed the mountain to foreign climbers last year because of the pandemic. Nepal has allowed in foreign climbers this season despite a surging COVID-19 outbreak, and at least one climber, a Norwegian, confirmed last month he had contracted the virus.

Nepal mountaineering officials have denied any outbreak on the mountain, citing only altitude sickness and other ailments common in the cold, harsh, low-oxygen environment where climbers stay in close quarters. This week, the Himalayan nation halted all flights as part of a strict lockdown of its capital and major cities amid its recent surge.

In contrast, China, where COVID-19 first emerged, has now largely contained domestic transmission of the virus, but it has maintained restrictions such as health checks and is on guard against imported cases.

The 38 people who were issued Chinese permits to climb the peak, known as Qomolongma in Tibetan, must come from parts of China that are at low risk for infection and must show a clean bill of health before attempting the summit, state media reported Friday.

They must undergo temperature checks regularly, use bottled oxygen and stay 4 meters (13 feet) from other climbers at the summit. They will be provided masks, thermometers and disinfectant.

Climbing schedules from the south side of the mountain, which is in Nepal, will be consulted so packs of climbers don’t meet, said Nyima Tsering, head of the bureau overseeing Chinese climbing operations. People not registered to climb on the Chinese side are strictly barred from that side.

Last year, China used the break in climbing to haul some 6 tons of garbage off the mountain that has attracted ever-larger groups of climbers enabled by commercial mountaineering companies.

In 2019, 362 people climbed Everest from the north side, 241 of whom made it to the summit. Slightly more climbed from Nepal, where the sale of mountaineering permits and trekking and mountaineering jobs are major drivers of the local economy.

FILE – In this May 16, 2020, file photo released by Xinhua News Agency, Chinese surveyors hike toward a higher spot from the base camp on Mount Qomolangma at an altitude of 5,200 meters. (Jigme Dorje/Xinhua via AP, File)

These were the details of the news China opens Everest’s north side to 38 virus-tested climbers for this day. We hope that we have succeeded by giving you the full details and information. To follow all our news, you can subscribe to the alerts system or to one of our different systems to provide you with all that is new.