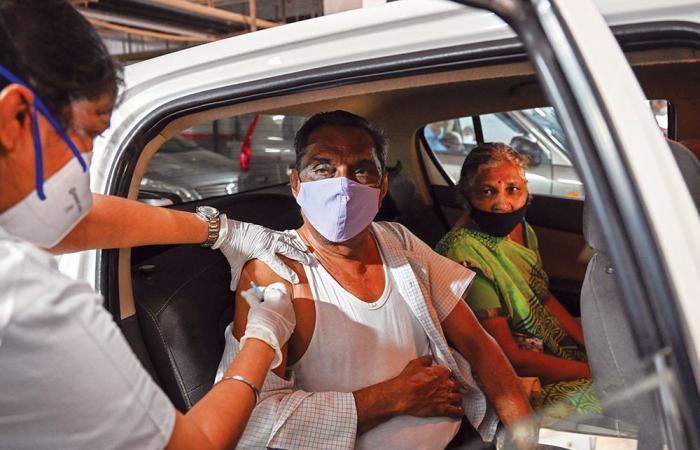 Thank you for reading the news about Too sick to treat: Over 500 health staff test positive for virus in Indian state and now with the details

Jeddah - Yasmine El Tohamy - NEW DELHI: More than 500 medical staff have tested positive for coronavirus in the Indian state of Maharashtra, adding to the woes of the country, where most hospitals are already grappling with an acute shortage of health workers.

On Wednesday, the country registered more than 382,000 coronavirus cases and a record 3,700 deaths, of which the western state of Maharashtra accounted for 51,800 infections and almost 900 fatalities.

Last week, India accounted for almost half of coronavirus cases reported worldwide, the World Health Organization said on Wednesday, as deaths in the south Asian nation surged during the past 24 hours.

Pune, one of Maharashtra’s main urban centers with a population of more than 3.5 million people, is the second-worst affected city in India, with almost 6,000 cases being reported each day. The city has recorded 880,545 infections and 9,770 deaths since the start of the pandemic last year.

“The city’s only public hospital, Sassoon Hospital, is working beyond its capacity, and the hospital is understaffed,” Dr. Pransant Munde, secretary of the Maharashtra Association of Resident Doctors, told Arab News on Wednesday.

“In Pune itself, over the last one month, more than 100 doctors have become infected, and if you take the overall picture of the state, more than 500 medical staff have tested positive,” Munde said.

Last week, several doctors went on a “token strike” in Pune to pressure authorities into providing more staff to hospitals.

Munde said that the situation is “so grim,” that at times, “four patients are placed in one bed and then treated.”

He added: “Doctors who test positive have to return to work within seven days of rest,” contrary to the mandatory 14-day quarantine that is advised in such cases.

“We feel helpless when we see patients dying in front of our eyes due to lack of oxygen or care. Just the other day, a 34-year-old man died in front of us because he could not get proper attention. A doctor has limitations,” Munde said.

“Doctors are not only treating the patients, but also taking dead bodies to the mortuary, a job done by nonmedical workers. We are always running the risk of getting infected,” he added.

Blaming the government for its failure to improve the state’s medical infrastructure over the past year, Munde said: “Be it the state government or the central government, they have failed the people of the country in this crisis.”

The situation is equally alarming in Mumbai, the financial hub of India and the capital of Maharashtra, with hundreds of doctors testing positive for coronavirus.

“There are more than 200 resident doctors who have become infected in recent times,” Dr. Akshaya Yadav of Sion Hospital told Arab News.

He said: “Compared with last year, the doctors are not being taken care of well.

“If two to three doctors stay in a single room, they are bound to spread the infection. Last year, doctors were accommodated in hotels and properly taken care of,” he added.

Vanita Bokde, another doctor from the same hospital, said that several doctors “who should be finishing their residencies are overstaying,” because there are no clear guidelines.

He added: “More doctors are getting infected because a large number of them are deployed everywhere. We are final year students; we have to study, we have to do our duty. Our residencies have finished, but were extended due to the pandemic.”

Meanwhile, India’s national capital New Delhi continues to gasp for air amid a severe shortage of medical oxygen, forcing the Supreme Court on Wednesday to order the federal government to present a “comprehensive plan to ensure that Delhi receives its quota of 700 metric tonnes of oxygen by Thursday morning.”

However, Pune-based doctor Avinash Bhondwe warned that the health crisis across the country “is not going to ease anytime soon.”

Bhondwe, a member of the country’s premier doctors’ group, the Indian Medical Association, told Arab News: “Maharashtra is showing signs of little improvement, but that cannot be said about the rest of the country.”

The problem, he added, is that “even if you have more beds today, you don’t have oxygen.”

These were the details of the news Too sick to treat: Over 500 health staff test positive for virus in Indian state for this day. We hope that we have succeeded by giving you the full details and information. To follow all our news, you can subscribe to the alerts system or to one of our different systems to provide you with all that is new.