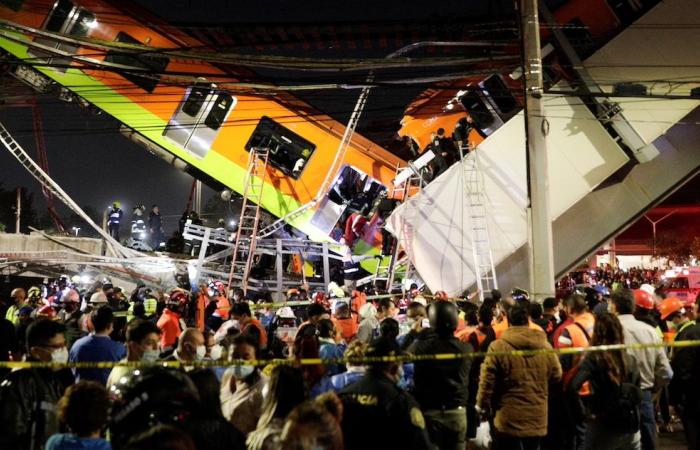 Hello and welcome to the details of Mexican metro crash witness describes horror, and silence, of rail collapse and now with the details

MEXICO CITY, May 6 ― Beatriz Ramon and her younger brother Oscar heard a ferocious bang and saw the lights snap out as they left a grocery store in southeastern Mexico City just before 10.30pm on Monday night, right across the street from the metro line.

They thought a transformer had blown out.

But when the electricity returned minutes later, Ramon saw white smoke rising from the metro, and two orange wagons plunged into a V-shape between the elevated track that had snapped in two.

The train had crashed onto a road below, killing 25 people. It was the capital's deadliest metro accident in decades.

The 30-year-old dentist and her brother dashed to the scene to offer help while trying to keep their distance in case the broken overpass collapsed further. The normally busy thoroughfare in the working class neighborhood was quiet.

“I thought I might hear yells of the people inside but just the opposite, it was silence,” Ramon said.

Bystanders propped ladders over the pile of rubble, and Ramon soon saw a man emerge from one of the cars.

“First it was a shadow. When we could finally see well, we all yelled, 'there's someone coming down!'“

The man jumped and landed on top of the debris, disoriented. Another two people followed, including a man in his 20s who appeared to be in shock, covered in blood and complaining that his torso hurt. Ramon couldn't find an injury, and realised the blood belonged to someone else.

A fourth survivor was a man who had lost a hand and was bleeding severely.

The magnitude of the disaster began to sink in as Ramon watched some 20 victims carried out on stretchers.

Relatives began arriving, looking for loved ones they feared had been on the train.

Ramon pondered who was to blame. “Is it corruption? Is it impunity?,” she wondered.

Ever since the metro's inauguration in 2012, Ramon said she saw the line as a blessing to help her community reach far-flung schools, jobs and family by putting her distant borough of Tlahuac on the sprawling capital's transit network.

And when some people had worried the elevated track would collapse under the weight of the bulky train, Ramon tried to persuade the skeptics that the railway, built by experienced engineers, would not fall.

“I encouraged many people to use it, especially our grandmothers and mothers that were scared of the height,” she recalled, saying she felt its failure personally.

“It hurts, it hurts very much,” she said. ― Reuters

These were the details of the news Mexican metro crash witness describes horror, and silence, of rail collapse for this day. We hope that we have succeeded by giving you the full details and information. To follow all our news, you can subscribe to the alerts system or to one of our different systems to provide you with all that is new.