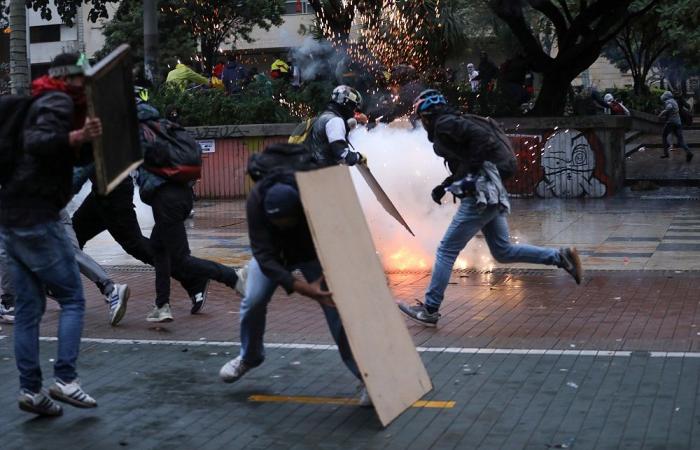 Hello and welcome to the details of Colombians march in eighth day of protests, police deploy tear gas and now with the details

BOGOTA, May 6 ― Riot police fired tear gas at protesters in Bogota yesterday during an eighth day of nationwide anti-government demonstrations, after crowds attacked police stations in the capital overnight.

The protests were originally called in opposition to a now-canceled tax reform plan, but demonstrators have broadened their demands to include government action to tackle poverty, police violence and inequalities in the health and education systems.

Demonstrations and lawmaker opposition led to the tax reform's withdrawal and the resignation of the finance minister. International organizations have warned against police violence, which is so far linked to just under half of 24 confirmed deaths, mainly of protesters.

Many protesters are calling for the ESMAD riot police to be disbanded, but some said they did not blame individual officers.

“They get orders from the state, which they have to follow,” said student James Romero, 18, who joined a chanting crowd in Bogota's central Bolivar Plaza.

Romero said he was struck several times in the back by a baton-wielding ESMAD officer while running from confrontations on Saturday.

Bogota psychologist Benjamin Paba Al-Faro, 53, said he was demonstrating for better education and to ensure the continuity of the peace process with now-demobilized FARC rebels, adding: “This isn't about defeating just one law.”

Poverty, which rose to 42.5 per cent of the population last year amid coronavirus lockdowns, has aggravated long-standing inequalities and reversed some recent development gains.

The number of Colombians living in extreme poverty grew by 2.8 million people in 2020.

The protests and associated road blockades ― which have stymied shipments of top agricultural export coffee ― could affect the economy, the central bank's technical director said yesterday.

“They are temporary effects, but they could affect monetary policy depending on their duration and reach,” Hernando Vargas said during a presentation.

President Ivan Duque has said the government will create space to listen to citizens and develop concrete proposals, similar to overtures offered to protesters following demonstrations in 2019. Many groups ― including major unions ― say he has failed to deliver.

In a video yesterday, Duque repeated government allegations that drug trafficking mafias were behind vandalism and looting and said more than 550 arrests had been made.

“There will be no truce with those who commit these crimes ― all of society will take them to justice,” Duque said.

During a seventh night of protests on Tuesday, 30 civilians and 16 police officers were injured in Bogota, the mayor's office said in a statement.

In one attack, a crowd tried to “burn alive” a group of 10 police officers by setting fire to a station, it said.

Asked about the attack, a police officer in Bolivar Plaza told Reuters he was “disappointed as a human being.”

Mayor Claudia Lopez called the destruction and violence in the city overnight “unbelievable.”

Protests nationwide have resulted in 24 deaths, according to the human rights ombudsman, 15 of them in the western city of Cali.

The national police or the ESMAD riot squad were listed by the ombudsman as the entity “presumed responsible” for 11 of the deaths, including that of a boy under 18 years old. A local human rights observatory said the death toll was more than 30. ― Reuters

These were the details of the news Colombians march in eighth day of protests, police deploy tear gas for this day. We hope that we have succeeded by giving you the full details and information. To follow all our news, you can subscribe to the alerts system or to one of our different systems to provide you with all that is new.