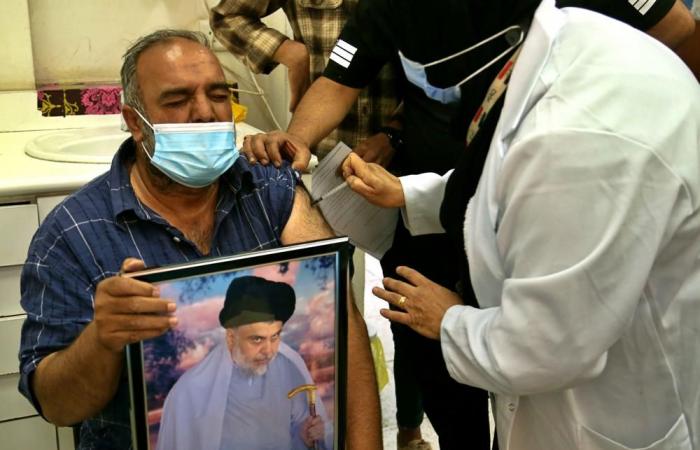 You are now following the details of the Iraq pushes vaccine rollout amid widespread apathy, distrust news and now we leave you with the details

Mohamed Nass - Cairo - BAGHDAD (AP) — Iraq’s vaccine roll-out had been faltering for weeks. Apathy, fear and rumors kept many from getting vaccinated despite a serious surge in coronavirus infections and calls by the government for people to register for shots.

It took a populist Shiite cleric’s public endorsement of vaccinations — and images of him getting the shot last week — to turn things around.

Hundreds of followers of Muqtada al-Sadr are now heading to clinics to follow his example, underscoring the power of sectarian loyalties in Iraq and deep mistrust of the state.

“I was against the idea of being vaccinated. I was afraid, I didn’t believe in it,” said Manhil Alshabli, a 30-year-old Iraqi from the holy city of Najaf. “But all this has changed now.”

“Seeing him getting the vaccine has motivated me,” said Alshabli, speaking by phone from Najaf where he and many other al-Sadr loyalists got their shots, Alshabli compared it to soldiers being energized when they see their leader on the front line.

Iraq has grappled with a severe second wave of the coronavirus pandemic. New case numbers spiked to over 8,000 per day last month, the highest they have ever been. The surge was driven largely by public apathy toward the virus. Many routinely flout virus-related restrictions, refusing to wear face masks and continuing to hold large public gatherings.

Daily rates have decreased in the last week, with 5,068 new cases reported on Monday.

Iraq’s Health Ministry has repeatedly tried to reassure Iraqis that the vaccines are not harmful, but this has not convinced many who harbor long-standing distrust of the health care system.

Iraq’s centralized system, largely unchanged since the 1970s, has been ground down by decades of war, sanctions and prolonged unrest since the 2003 U.S. invasion. Successive governments have invested little in the sector.

Many avoid going to public hospitals altogether. Last month, a massive blaze tore through the coronavirus ward in a Baghdad hospital, killing more than 80 people and injuring dozens. Iraq’s Health Minister Hasan al-Tamimi was suspended for alleged negligence, and resigned Tuesday over the incident.

So far, fewer than than 380,000 people have been fully vaccinated in the country of 40 million.

Last week, as sluggish vaccination efforts continued, pictures of the black-turbaned al-Sadr, wearing a black mask and getting jabbed in the arm, began circulating on social media.

Shortly after, his followers launched a vaccination campaign, calling on supporters to join them and posting photos of themselves carrying his posters while seated at medical centers receiving the vaccine.

The Health Ministry has cashed in on the campaign, publishing on its Facebook page the photo of al-Sadr getting the shot, saying his vaccination was meant to encourage all citizens to do the same.

Faris Al-Lami, assistant professor of community medicine at the University of Baghdad, said the government is widely viewed as corrupt and that its actions since the start of the pandemic only deepened the public’s mistrust.

He cited certain early practices, such as using security forces to take patients from their homes as if they were criminals, and holding up the burials of those who died of the virus for several weeks.

Al-Lami also pointed to what he said are current problematic policies. For example, he said high-risk patients, such as those with chronic or immunodeficiency diseases, have to wait inside hospitals to get their shots, putting them at high risk of infection. Meanwhile, people with personal connections can get them easily.

He said it’s a positive development when the vaccination of a political or religious figure encourages people to get their shots. “But the ideology that is based upon blindly following anyone’s decision is a disaster in itself,” he said.

Iraq received 336,000 new doses of the AstraZeneca vaccine in late March and Iraqis above the age of 18 are qualified to get the jab. Last month, the first shipment of Pfizer doses arrived in the country, with 49,000 shots.

“All the vaccines that arrived in Iraq are safe and effective … but until this moment, there are some citizens who are afraid of taking the vaccine as a result of malicious rumors,” said Ruba Hassan, a Health Ministry official.

The Health Ministry has introduced measures to push Iraqis to get the shots. They include travel restrictions for those unable to produce a vaccination card and dismissals of employees at shops, malls and restaurants. While the measures have led more people to seek out vaccinations, they have also confused and angered a still largely reticent public.

Restaurant owners said they were blindsided by the measures, uncertain if it meant they would face closure if they refused them.

“There is no clear law to follow,” said Rami Amir, 30, who owns a fast food restaurant in Baghdad. “I don’t want all my staff to be vaccinated because they might have severe side effects or complications,” he said, echoing widespread skepticism.

Omer Mohammed, another restaurant owner, said applicants for a new job at his eatery dropped out when he said vaccination cards were a necessary prerequisite.

Medical professionals were prioritized to receive the vaccine and were able to pre-register in January when Iraq received its first shipment of 50,000 doses of the Chinese Sinopharm vaccine.

When recent medical school graduate Mohammed al-Sudani, 24, went to get vaccinated this month he said the process was “bittersweet.” He showed up with no previous registration for the AstraZeneca vaccine. He didn’t need it. There was barely anyone there.

The next week he brought two of his aunts to the same center. There were only two other people in the waiting room.

“The nurse came in and asked them to call their relatives and friends to come to raise the number to at least 10 people because the jabs inside the vaccine kits were only valid for 6 hours,” he said.

It was a different scene in hospitals that carry Pfizer shots. Tabark Rashad, 27, headed to Baghdad’s al-Kindi hospital last week. The waiting room was crowded with dozens of people, sparking infection concerns.

“I went to protect myself against COVID-19, not get it in this room,” she said. “It was chaos.”

IMAGE: A follower of populist Shiite cleric Muqtada al-Sadr holds a picture of him while receiving a dose of the Chinese Sinopharm coronavirus vaccine at a clinic in Sadr City, Baghdad, Iraq, Wednesday, May 4, 2021. (AP Photo/Hadi Mizban)

These were the details of the news Iraq pushes vaccine rollout amid widespread apathy, distrust for this day. We hope that we have succeeded by giving you the full details and information. To follow all our news, you can subscribe to the alerts system or to one of our different systems to provide you with all that is new.