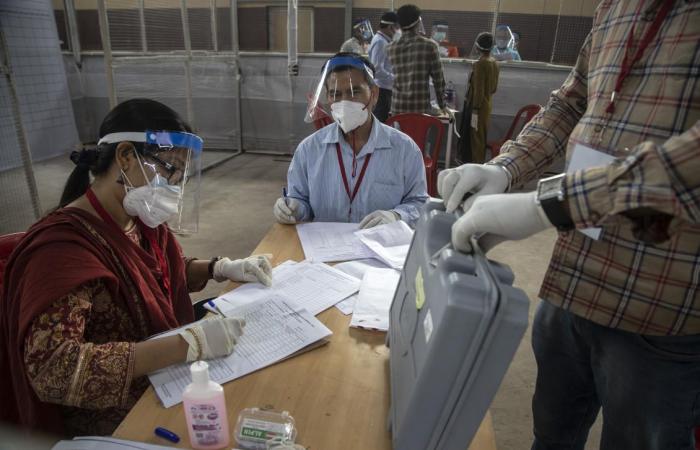 Jeddah - Yasmine El Tohamy - NEW DELHI: India’s Prime Minister Narendra Modi failed to make gains in four recent state elections, according to preliminary voting trends released Sunday by the independent Election Commission, indicating his Hindu nationalist party’s political strength may be slipping as the country struggles to contain an unprecedented surge in coronavirus cases.
The Election Commission’s vote forecast showed the Bharatiya Janata Party trailing in West Bengal state behind a powerful regional party, apparently unable to dislodge the state’s firebrand chief minister, Mamata Banerjee, after a hard-fought campaign.
Modi’s party looks set to retain power in the northeastern Assam state for a second term, but failed to pick up any significant gains there or make inroads in two southern states, Tamil Nadu and Kerala. Final results will be released late Sunday.
Even before the current virus surge, Modi’s party faced stiff challenges in these local legislative elections. Following the disappointing results, Modi stands weakened but faces no threats to staying on as prime minister until his term ends in 2024.
“The BJP started running out of steam as the pandemic spread,” said political analyst Nilanjan Mukhopadhyay.
“The verdict in West Bengal state will definitely weaken Modi’s position,” he added, but cautioned that further study of the results was needed in order to say how much they were a referendum on the BJP’s handling of the COVID-19 outbreak.
With 70% of the vote counted in West Bengal, the rival All India Trinamool Congress party could win 211 out of 292 seats in the state legislature — having won 21 seats so far and leading in anther 190. That’s compared to potentially just 80 seats for the BJP, which has won three seats outright and leads in 77.
In Assam’s 125-seat state legislature, the BJP and its allies are ahead in the race for 75 seats, compared to 49 seats tipping toward its main challengers.
Supporters of the All India Trinamool Congress party — many without masks and ignoring social distancing guidelines — held victory celebrations and set off firecrackers in West Bengal after the initial results were released.
Health experts say the massive electoral rallies and marches held as voters cast their ballots in March and April are partly to blame for the subsequent spike in COVID-19 infections. Public anger for allowing the elections to go forward despite the risk has been directed at both Modi’s government and the Election Commission.
Last week, the High Court in Tamil Nadu state slammed the Election Commission for allowing crowded campaigns in the middle of a global pandemic. India’s daily new virus cases began rising past 100,000 in late March, and above 300,000 daily new cases on April 21, collapsing India’s tattered health care system.
“Your institution is singularly responsible for the second wave of COVID-19. Your officers should be booked on murder charges probably,” the court said.
Polly Roy, a professor of virology at the London School of Hygiene and Tropical Medicine, said last week that India’s extremely dense population and the government’s lax rules about election rallies and religious gatherings fueled the outbreak. Experts have also blamed new, more contagious virus variants.
Nationwide, death is so omnipresent that burial grounds are running out of space in many cities, and glowing funeral pyres blaze through the night. With the government unable to maintain a steady supply of oxygen to overwhelmed hospitals, desperate relatives plead for oxygen outside or weep in the street for loved ones who died waiting for treatment.
On Sunday, India recorded a slight drop in new infections with 392,488, down from a high of 401,993 in the previous 24 hours. It also reported 3,689 additional deaths, bringing the total number of fatalities to 215,542. Experts believe both figures are an undercount.
Modi’s party soared in Hindu-dominated regions in central and northern India since he was elected in 2014. The recent local elections were seen as crucial for the party to gain a foothold in three states that have sizeable minority Muslim populations. The Hindu nationalist BJP has for years been accused of stoking religious polarization and discriminating against minorities.
The prime minister also wants to project the BJP as a national party, replacing a dynastic Congress party that governed India for more than six decades after independence from British rule in 1947. The Congress party, led by Sonia Gandhi, did poorly in the recent elections, failing to capture power from the BJP in Assam or from Communist parties in Kerala.

These were the details of the news Modi’s party takes electoral hit amid virus surge for this day. We hope that we have succeeded by giving you the full details and information. To follow all our news, you can subscribe to the alerts system or to one of our different systems to provide you with all that is new.

PREV Let down by rich and failing the poor, global vaccine scheme to be shaken up
NEXT Alpha, Beta, Gamma, Delta — WHO uses Greek alphabet to name COVID-19 variants