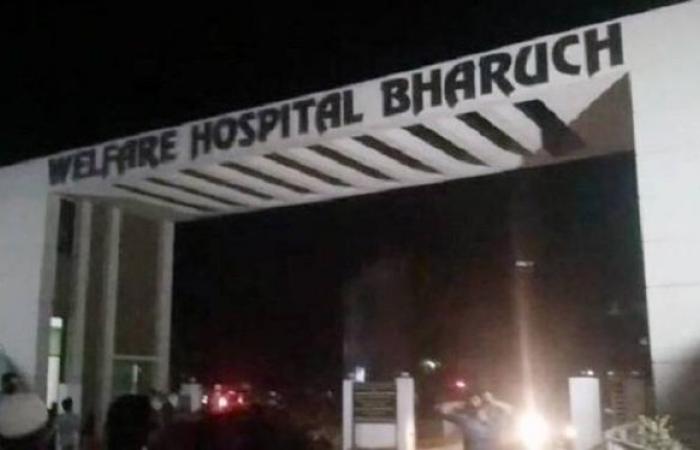 Hind Al Soulia - Riyadh - NEW DELHI — At least 18 people undergoing treatment for COVID-19 died following a fire in the early hours at a hospital in Bharuch district in the western Indian state of Gujarat.

The Press Trust of India said quoting a local police official,"As per information at 6.30 a.m., the death toll in the tragedy stood at 18. Immediately after the fire, we had confirmation of 12 deaths."

Among those dead were 16 COVID-19 patients and two nurses in the latest in a series of hospital fires in India, officials said.

"Primary investigation revealed that the fire started due to a short-circuit in the ICU of the hospital," he said.

The fire broke out in the COVID-19 ward at the four-storied Welfare Hospital, which is situated on Bharuch-Jambusar highway, around 190 km from Gujarat's capital Ahmedabad.

A fire force officer said that the fire was brought under control within an hour and around 50 other patients were rescued by locals as well as firefighters and were shifted to nearby hospitals.

Indian Prime Minister Narendra Modi expressed his sorrow at the incident. "Pained by the loss of lives due to a fire at a hospital in Bharuch. Condolences to the bereaved families," he said.

The incident took place as the hospitals across the country are struggling to accommodate the increasing number of COVID-19 patients as a more virulent coronavirus variant attacked the country in the second wave of the pandemic.

The Indian health system is under massive pressure as hospitals run out of oxygen supply, basic medicines, vaccines, and ICU beds.

Reports of deaths of COVID-19 patients due to lack of oxygen and other key health equipment are still coming while several overburdened hospitals refused to admit more patients.

On April 23 a fire on the outskirts of Mumbai killed 13 COVID-19 patients, a few days after another blaze left 22 people dead at another clinic, also in Maharashtra state. — Agencies

These were the details of the news Fire in Indian hospital kills 18 COVID-19 patients for this day. We hope that we have succeeded by giving you the full details and information. To follow all our news, you can subscribe to the alerts system or to one of our different systems to provide you with all that is new.