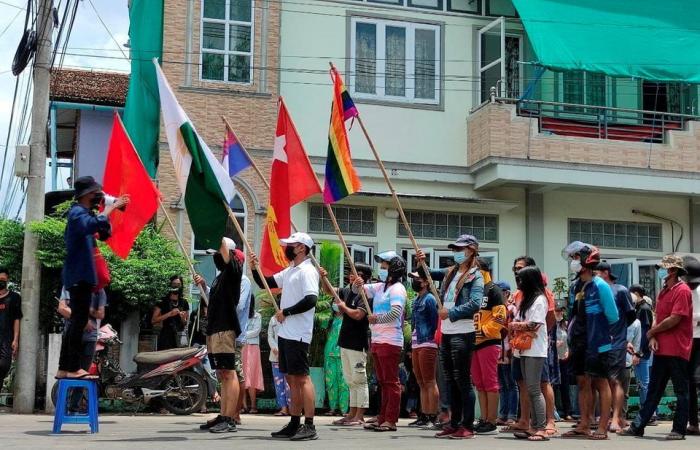 You are now following the details of the Myanmar protesters march three months after coup; U.N. warns of ‘standstill’ news and now we leave you with the details

Mohamed Nass - Cairo - Protesters against military rule marched in Myanmar on Saturday three months after a coup ended a democratic transition, with several small blasts compounding a sense of crisis that a U.N. envoy warned could bring state administration to a halt.

The military has tried to end dissent and impose its authority on a people largely opposed to the return of rule by the generals after 10 years of democratic reforms that included a government led by democracy champion Aung San Suu Kyi.

Despite a relentless crackdown in which at least 759 protesters have been killed, according to the Assistance Association for Political Prisoners (AAPP) advocacy group, crowds come out day after day to reject the junta.

“Our cause, democracy, our cause, a federal union. Free arrested leaders,” protesters chanted at one of two rallies in the main city of Yangon.

Suu Kyi, 75, has been detained since the coup the along with many other members of her party. The AAPP says more than 3,400 people have been detained for opposing the military.

People also rallied in the second city of Mandalay and the southern town of Dawei, media reported.

There were no immediate reports of violence.

Media reported several small blasts in different places including Yangon late on Friday and on Saturday. There were no immediate reports of casualties and no claims of responsibility.

A spokesman for the junta did not answer calls seeking comment. The military has accused pro-democracy activists of planting bombs.

The U.N. special envoy on Myanmar told the Security Council on Friday that in the absence of a collective international response to the coup, violence was worsening and the running of the state risked coming to a standstill, according to diplomats who attended the private meeting. read more

Christine Schraner Burgener briefed the 15-member council from Thailand, where she has been meeting regional leaders. She hopes to travel to Myanmar but the military has yet to approve a visit.

“The general administration of the state could risk coming to a standstill as the pro-democracy movement continues in spite of the ongoing use of lethal force, arbitrary arrests and torture as part of the military’s repression,” Schraner Burgener said, according to diplomats.

She told diplomats that reports of a continuing crackdown risked undermining momentum toward ending the crisis following a meeting of the 10-member Association of Southeast Asian Nations (ASEAN) on April 25 with the junta leader, Senior General Min Aung Hlaing.

U.N. special rapporteur on the situation of human rights in Myanmar, Tom Andrews, said Min Aung Hlaing had used the summit as a “propaganda ploy”.

“Indeed, he tried to appear to be what he is not – a legitimate leader,” Andrews said in a post on Twitter.

“The good news: Those who ARE legitimate are ready to engage: the National Unity Government.”

Ousted members of parliament from Suu Kyi’s party, politicians representing ethnic minorities and democracy activists set up the unity government but it has yet to win the international recognition it says it is due.

The U.N. Security Council reiterated its “deep concern” at the situation and its support for Myanmar’s democratic transition. The council has issued several statements since the coup but diplomats say Russia and China are likely to prevent any stronger council action against Myanmar.

Image: Demonstrators carry flags during a protest against the military coup, in Dawei, Myanmar April 27, 2021. Courtesy of Dawei Watch/via REUTERS

These were the details of the news Myanmar protesters march three months after coup; U.N. warns of ‘standstill’ for this day. We hope that we have succeeded by giving you the full details and information. To follow all our news, you can subscribe to the alerts system or to one of our different systems to provide you with all that is new.