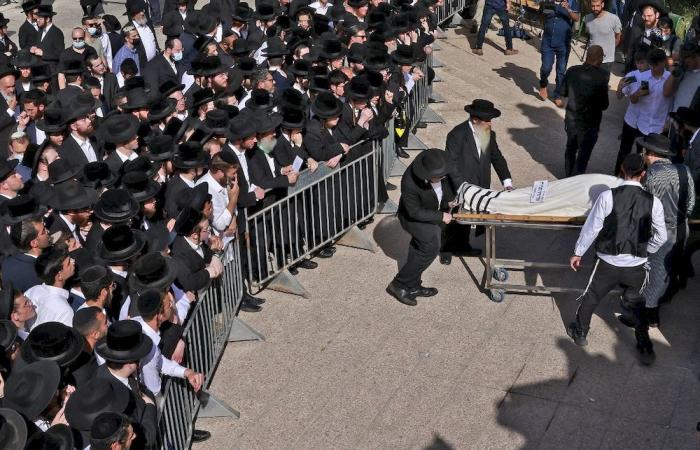 Hello and welcome to the details of From festival to tragedy: Israel pilgrims recount stampede and now with the details

MERON (Israel), April 30 — As Yaara Chaimovich visited Meron hours before it became the scene of a deadly stampede, she said she had been looking forward to showing her children “the beauty” of the holy site.

“It’s like Woodstock,” she said, comparing the Lag BaOmer holiday to the US rock festival. “Someone says a prayer, and everyone responds.”

But the annual pilgrimage quickly turned into a horrific night after tens of thousands packed the reputed site of Rabbi Shimon Bar Yochai’s tomb at Mount Meron in northern Israel.

Chaimovich, 44, said she had just finished watching a bonfire lighting ceremony at about midnight with two of her children when she tried to leave the area among thousands of people.

“Everything was so packed,” she told AFP.

As she pushed her five-year-old daughter Rivka ahead of her, Chaimovich said waves of people walked downhill in the opposite direction. In the melee, she lost her other daughter, 11-year-old Leah.

“It was so stressful,” Chaimovich recalled.

She took Rivka to the nearby tent where her family had planned to sleep the night. Eventually, Chaimovich said her husband returned to the pilgrimage site and found Leah, with a bruised arm, at a rescue services station.

Dozens of others were less fortunate.

In the early hours of Friday morning, men and children caught in a passage outside the tomb fell and were crushed in a stampede. At least 44 died in what rescue workers called the worst civilian disaster in Israeli history.

In the hours after the tragedy, couples and families wandered the site, stunned at the events that marred a treasured annual rite.

Moshe Shapiro, 19, carried a tent as he searched for a spot to stay the night.

The Jerusalem resident said he had been to the pilgrimage for each of the past 10 years.

“My father used to take me,” he said. “I fell in love with the place.”

Shapiro believes the site has miraculous powers, after an upturn in fortunes following a visit last year.

“I prayed for work, and a month later I found a good job,” he said. “It was a good salary and fit well with my studies.”

Thousands of people were at Meron when he arrived an hour before midnight, he said.

Witnesses said the crush began as people left the site after watching the ritual lighting of bonfires.

“A lot of people left to the same place,” Shapiro said.

He slipped away unhurt when he took a different exit.

In the early afternoon today, Shapiro walked streets outside the revered grave that were littered with empty water bottles, packaging from snacks, lost keys and prayer books.

Loudspeakers blared from time to time with news of more lost people looking for their families.

Cleaning staff in red vests took on the task of clearing rubbish.

Police officers were thick on the ground as VIPs including Naftali Bennett, head of the Yamina party, and Prime Minister Benjamin Netanyahu arrived to inspect the damage.

At Rambam hospital in Haifa, Gil Alon spoke from the bed where he was recovering.

“There was a narrow passage and a stairway,” said the 47-year-old.

“This whole area was supposed to contain something like 50 people (but) when I was there, there were at least 300 people,” Alon said in a video distributed by the hospital.

Alon said he was among the first to fall down the stairway.

“The bottom half of my body got stuck. There were three of us” lying on top of one another, he said. “The three of us survived because we looked after each other’s airways. “

Families hurried to identify their loved ones at the National Center for Forensic Medicine in Tel Aviv before Shabbat began.

Yael Freund, 58, of Bnei Brak visited the institute to support families after what she described as a “very difficult” night on the mountain.

She said she saw worrying signs before the tragedy.

“People were fainting,” she told AFP. “It was clear this (disaster) was going to happen.

“I wanted to ask the police, ‘Why don’t you stop people, so no more come down?’ I prayed to God, please, make sure there won’t be a disaster.”

Another witness, Yakov Meyer, described the scene as “horrifying”.

“For some reason, the police had closed the gate that was leading out down some stairs where people could have vacated the premises,” he told AFP.

“However, they were just crushed and pushed right up against the gate. The gate eventually broke and people fell over it, and then... they were crushed,” said the 49-year-old.

“I was shocked. You could hear a lot of people screaming... and then they started carrying bodies out on stretchers.” — AFP

These were the details of the news From festival to tragedy: Israel pilgrims recount stampede for this day. We hope that we have succeeded by giving you the full details and information. To follow all our news, you can subscribe to the alerts system or to one of our different systems to provide you with all that is new.