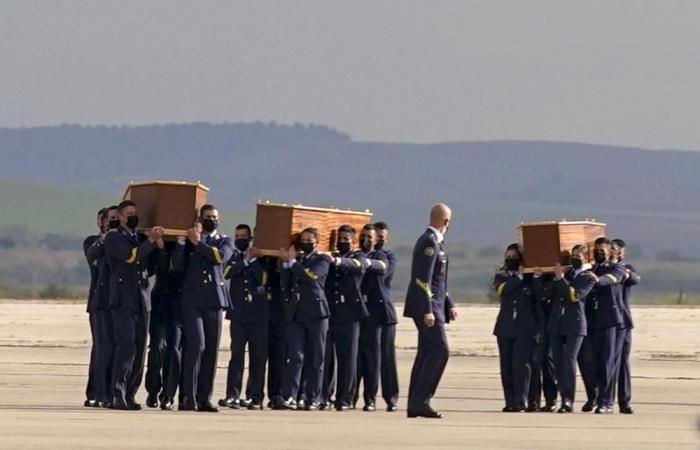 Mohamed Nass - Cairo - MADRID (AP) — The bodies of two Spanish journalists and an Irish wildlife campaigner killed by jihadists in Burkina Faso this week while they were filming a documentary on poaching were flown home Friday as several European countries vowed to keep fighting extremism in Africa’s Sahel region.

David Beriáin, 44, and Roberto Fraile, 47, journalists with a long record of experience in conflict zones, had joined Irish conservationist Rory Young on an anti-poaching patrol led by a special military wildlife force in eastern Burkina Faso when their convoy was ambushed by jihadists on Monday.

The three Europeans and one Burkinabe soldier were killed, according to Spanish authorities. The government of Burkina Faso said that six other people were wounded.

The bodies of the Europeans were flown overnight from the capital of the African nation, Ouagadougou, on an Airbus provided by the Spanish military. A guard of honor carried their coffins out of the aircraft on arrival at a military airport near Madrid, where relatives of the Spanish journalists awaited.

“It’s a sad day,” Foreign Minister Arancha González Laya said following a brief ceremony on the tarmac. “David and Roberto went to lengths to give voice to those who don’t have them, to make visible hard realities surrounding us and to strengthen democracy.”

The minister announced that the government would confer the two journalists with Spain’s Order of Civil Merit that recognizes extraordinary contributions by individuals.

The two-person crew was making a documentary on how Burkina Faso’s authorities are tackling poaching, also focusing on the communities of people living in the park. Young, the director of the Chengeta Wildlife Foundation, was leading the patrol in the country’s Arly National Park, said a statement by the group on Facebook.

Two soldiers wounded in the attack said they tried to protect the foreigners during fighting that lasted three hours, but were outnumbered by the jihadists. One foreign worker of the wildlife foundation did survive, the soldiers told The Associated Press insisting on anonymity because they were not authorized to speak to the media.

Burkina Faso has been overrun by attacks linked to Islamic extremists that have killed thousands and displaced more than one million people.

Violence has surged this week in hard-hit parts of the country, like the east as well as the north. The same day the anti-poaching patrol was ambushed, 18 people were killed by gunmen in the Sahel region. In a statement earlier this week, the government said that “terrorists have carried out acts of intimidation, looting, and assassination on civilian populations.”

The governments of Spain, France, Germany and Italy said in a joint statement that they were committed to supporting the violence-struck region with military training and supplies, but also with humanitarian aid to provide much-needed stability there.

“The area is one of enormous turbulence, with great geostrategic risks for our country,” said González Laya.

Spain’s Defense Minister, Margarita Robles, said that “the fight against terrorism is not going to stop, we want to be relentless.”

Robles also said that Spanish intelligence officials were working on the ground supporting the Burkinabe government’s investigation into the killings.

Rights groups say there must be a thorough and impartial investigation of the killings to understand “the circumstances surrounding their deaths (which) can help prevent such tragic killings in the future,” said Corinne Dufka, West Africa director for Human Rights Watch.

By SAM MEDNICK and ARITZ PARRA

These were the details of the news Bodies of 3 Europeans ambushed in Burkina Faso flown home for this day. We hope that we have succeeded by giving you the full details and information. To follow all our news, you can subscribe to the alerts system or to one of our different systems to provide you with all that is new.