Outdoor mask guidance echoes what many Americans already do 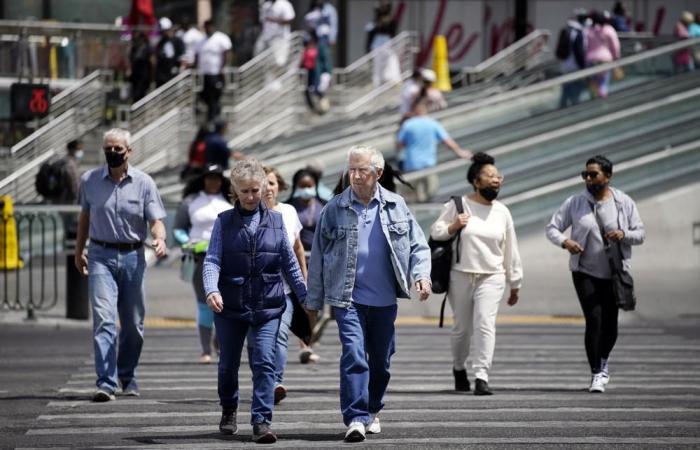 Mohamed Nass - Cairo - In the small Nebraska town of Oxford, the school district dropped its mask mandate last month in what was a fairly straight-forward decision: Cases were down dramatically, and it didn’t bother local officials that their move flouted Centers for Disease Control and Prevention guidelines.

Those federal mask guidelines just didn’t seem to fit local conditions well in the town of about 800 people where hardly anyone wears a mask.

“We haven’t paid a whole lot of attention to what is going on at the federal level — mainly what is coming out through the state,” Southern Valley Superintendent Bryce Jorgensen said. “You just can’t compare Chicago to Oxford, Nebraska. Things are just different.”

On Tuesday, the U.S. Centers for Disease Control and Prevention eased its guidelines on the wearing of masks outdoors, saying fully vaccinated Americans don’t need to cover their faces anymore unless they are in a big crowd of strangers. And those who are unvaccinated can go outside without masks in some situations, too.

For most of the past year, the CDC had been advising Americans to wear masks outdoors if they are within 6 feet of one another.

The decision marked the U.S. government’s latest step toward normalcy, but came as much of the country already had moved on from mask rules. The CDC essentially endorsed what many Americans have already been doing.

On the same day the CDC updated its guidance, Louisiana’s governor partially lifted the state’s mask mandate, the first Democratic governor to make such a move during Joe Biden’s presidency. Elsewhere, local government leaders have been doing away with mask rules, and in many states, face coverings are an infrequent sight indoors, let alone outside.

In Montgomery, Alabama, 73-year-old Judy Adams said she hasn’t worn a mask outside since the early days of the pandemic a year ago and only puts them on inside when stores mandate them. Alabama had a statewide mask mandate until earlier this month, when the governor let it expire.

Since the start of the pandemic, the federal government has struggled to accomplish consistency in public health measures from state to state. The CDC has issued guidelines on masks, social distancing, travel and other activities but it’s up to governors on whether to adhere to the measures. Some states never had mask mandates, while others still have them on the books.

“Today, I hope, is a day when we can take another step back to the normalcy of before,” CDC Director Dr. Rochelle Walensky said Tuesday. “Over the past year, we have spent a lot of time telling Americans what you can’t do. Today, I am going to tell you some of the things you can do, if you are fully vaccinated.”

The CDC says that, whether they are fully vaccinated or not, people do not have to wear masks outdoors when they walk, bike or run alone or with members of their household. An unvaccinated person can also go maskless to a small outdoor gathering with fully vaccinated people.

But unvaccinated people — defined as those who have yet to receive both doses of the Pfizer or Moderna vaccine or the one-shot Johnson & Johnson formula — should wear masks at small outdoor gatherings that include other unvaccinated people, the CDC says. They also should keep their faces covered when dining at outdoor restaurants with friends from multiple households.

And everyone, fully vaccinated or not, should keep wearing masks at crowded outdoor events such as concerts or sporting events, the CDC says.

The agency continues to recommend masks at indoor public places, such as hair salons, restaurants, shopping centers, gyms, museums and movie theaters, saying that is still the safer course even for vaccinated people.

The change comes as more than half of U.S. adults — or about 140 million people — have received at least one dose of vaccine, and more than a third have been fully vaccinated.

Walensky said the decision was driven by rising vaccination numbers; declines in COVID-19 cases, hospitalizations and deaths; and research showing that less than 10% of documented instances of transmission of the virus happened outdoors.

The new guidance represents another carefully calibrated step on the road back to normal from the coronavirus outbreak that has killed over 570,000 people in U.S.

In Plano, Texas, Rob Webster, a 49-year-old church employee, said the new guidelines sound “reasonable” but he has some reservations.

“My only concern is that there are so many people who want to buck the system anyway,” said Webster, communications director at Custer Road United Methodist Church, which requires masks on church property, including for outdoor youth group meetings.

“So I don’t know if I was around a group of people who weren’t wearing masks, are they really vaccinated? … It makes me maybe a little more fearful and less trusting of the people around me.”

In the Nebraska school district, Superintendent Jorgensen said the district decided to eliminate its mask rule based on conditions in the area and in the state, which never had a statewide mask mandate.

The district did see an elevated risk of the virus last fall when cases statewide were peaking, but there hasn’t been a single case in the district since January and fewer than a dozen cases had been reported in the two counties around the district when they made the decision.

Jorgensen said the district is still being careful and will require students to quarantine for 10 days if they test positive for the virus, but the mask mandate didn’t seem necessary anymore.

“It’s not like we’ve totally thrown everything out the window. We still are closely watching it and monitoring every situation we can. But it just seems that those seem a little bit extreme,” Jorgensen said of the federal mask recommendations. “I think we have people here who can make some good local decisions, so that’s why we did it the way we did it.”

By CARLA K. JOHNSON and JOSH FUNK and MIKE STOBBE

Image: Masked and unmasked pedestrians walk across Las Vegas Boulevard, Tuesday, April 27, 2021, in Las Vegas. The Centers for Disease Control and Prevention eased its guidelines Tuesday on the wearing of masks outdoors, saying fully vaccinated Americans don’t need to cover their faces anymore unless they are in a big crowd of strangers. (AP Photo/John Locher)

These were the details of the news Outdoor mask guidance echoes what many Americans already do for this day. We hope that we have succeeded by giving you the full details and information. To follow all our news, you can subscribe to the alerts system or to one of our different systems to provide you with all that is new.

PREV Body found in Belgium is missing far-right soldier, ends five-week manhunt
NEXT ‘You stabbed me’: Son forced to face accused father in US murder trial