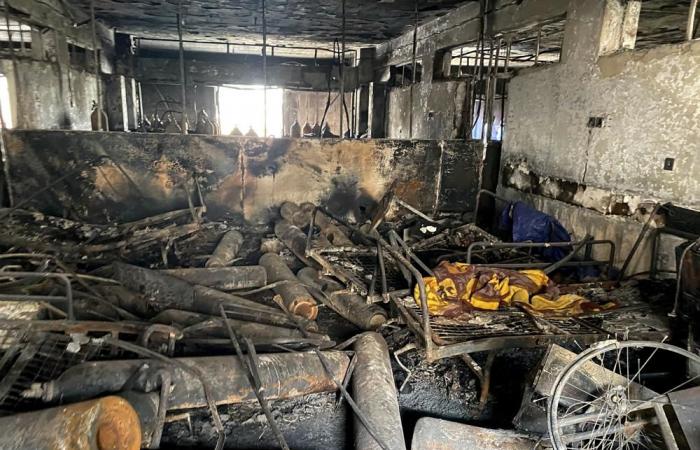 Mohamed Nass - Cairo - BAGHDAD (AP) — It was a night of unimaginable horror as flames engulfed the intensive care unit of a Baghdad hospital: deafening screams, a patient jumping to his death to escape the inferno and relatives staying by their loved ones, refusing to abandon coronavirus patients tethered to ventilators.

Iraqi doctors, medical staff and rescue workers who witnessed the first moments of the catastrophic blaze described the scenes to The Associated Press, many overcome by trauma and saying that night is forever seared in their memory.

The fire, which erupted late Saturday at the Ibn al-Khatib hospital’s coronavirus ward, raged for hours before claiming 82 lives and injuring 110 people. The death toll could still climb, with many of those hurt listed in serious condition.

Officials said the blaze was set off by exploding oxygen cylinders; days later, speculation has run rampant about what caused them to explode. Authorities have yet to issue the results of an official investigation.

Iraq, a nation toughened by decades of dictatorship, war and sectarian conflict — and now struggling to cope with the pandemic — remains in shock. Senior health officials have been fired or suspended amid allegations of negligence.

Sabah Samer, a doctor, and Yousif Hussein, a paramedic, were among the first to charge toward the blaze to try and help the victims. They say the hospital was a firetrap, especially the COVID-19 ward.

“The fire spread so quickly because of the combustible oxygen cylinders,” said Samer. “The walls of the rooms were padded with plastic and nylon, which fed the fire.”

He said he remembers the cylinders exploding one after another for almost every minute that he was inside, with flames shooting through the hospital windows. He said he counted at least 20 explosions.

Samer and other rescuers said it was impossible to reach many of the patients — they could hear screams and pleas for help from the second floor of the hospital.

One patient, a nurse with COVID-19, jumped through the window to his death, his body in flames. His charred remains were retrieved from the hospital courtyard later, Samer said.

Many have since pointed to blatant shortcomings in the hospital’s safety measures. Fire extinguishers did not work and emergency exits were inexplicably shut.

Dr. Kamal al-Rubaie, 28, was on the hospital’s second floor ICU ward, filled with COVID-19 patients on oxygen when the fire started. He was about to offer condolences to the family after one of his patients had died when he saw the first spark.

He said he had feared the oxygen cylinders ever since his first rotation at the ward last October. Each room inside the respiratory care unit typically stored over a dozen cylinders, with each patient needing between two to three a day. There were 30 patients in the unit at the time, he said.

In the day-to day patient care, there weren’t enough hospital staff to check that each cylinder was functioning properly. The task often fell on untrained relatives of patients, al-Rubaie said. Other doctors who have worked at the hospital said the same.

Given the risks in storing oxygen cylinders, which have to be kept far from combustible materials, modern hospitals have adopted centralized oxygen supply systems. These were even established in Iraqi hospitals in the 1980s under Sadaam Hussein but fell into disrepair during the embargo years, when UN sanctions prevented Iraq from trading oil and crippled the economy, and also after the 2003 US-led invasion.

With Iraqi health facilities aging, oxygen cylinders have become the norm. And though Ibn al-Khatib did have a functioning centralized oxygen system, patients preferred the cylinders, seeing them as better for individual care.

What triggered the first cylinder to explode remains unclear — some speculate a patient’s visiting relative was using a little electric stove or another heat source next to a cylinder.

Al-Rubaie doesn’t remember seeing a heat source and also, just the presence of a stove cannot explain how it might have sparked the fire, he said. Oxygen can only strengthen a fire that is already burning, he added.

Samer described how he rushed to a virus patient hooked up to a ventilator in one of the hospital rooms that was surrounded by fire, grabbed the man and his cylinder to carry him out. Every moment he carried them were filled with terror.

“The cylinder could explode at any moment,” he said.

As Hussein, the paramedic, moved patients outside, crowds of volunteers turned up, adding to the chaos. Some came running out of the burning hospital and told him the three fire extinguishers on the second floor were empty. They had tried to put out the flames with blankets.

Maj. Gen. Khalid Bohan, the head of Iraq’s civil defense, recounted the many letters sent over the years to various ministries, urging them to install or update safety systems — only to be told “”there are no financial allocations.” A smoke detector and a fire system must be in place and hospital administrators bear this responsibility, he told Iraqi state TV after the fire.

Fire safety systems are included in the design and cost breakdown of most hospitals, doctors said. But in practice, they are seldom put in place, raising new questions about corruption among officials.

Samer said a fire safety system could have contained the blaze and saved lives.

His last memory from that night were the deafening cries of those who could not be reached inside the hospital.

By SAMYA KULLAB and ABDULRAHMAN ZEYAD

IMAGE: The intensive care unit at the Ibn al-Khatib hospital is damaged following a fire that broke out last Saturday evening killing over 80 people and injuring over 100, in Baghdad, Iraq, Tuesday, April 27, 2021. (AP Photo/Khalid Mohammed)

These were the details of the news Iraqi medics recount horrors from Baghdad’s hospital inferno for this day. We hope that we have succeeded by giving you the full details and information. To follow all our news, you can subscribe to the alerts system or to one of our different systems to provide you with all that is new.