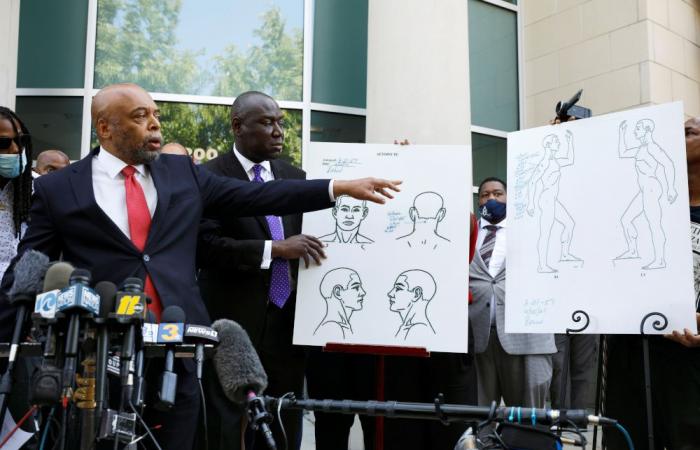 ELIZABETH CITY, (North Carolina), April 28 — Lawyers for the family of a Black man gunned down by sheriff’s deputies last week in North Carolina said a private autopsy showed he died from a “kill shot” to the back of his head, and the FBI yesterday opened a civil rights probe of the shooting.

Andrew Brown Jr, 42, was struck by four bullets to his right arm before the fatal shot penetrated the rear of his skull as he tried to drive away, attorneys for his relatives told a news conference in Elizabeth City, a riverfront community near the Virginia border where last Wednesday’s shooting took place.

Pasquotank County Sheriff Tommy Wooten said in a videotaped statement last week that his deputies were trying to serve Brown with search and arrest warrants stemming from a felony drug charge and that the incident was over in fewer than 30 seconds.

In the same video, chief deputy Daniel Fogg described Brown as a convicted felon whose “history of resisting arrest” posed what he called a “high risk of danger” to deputies confronting him.

Wooten has urged the public to avoid a rush to judgment while the case is under review by the state Bureau of Investigation, which opened an inquiry at the sheriff’s request.

He has acknowledged police video of the shooting exists, but none of it has been seen by the public. The family’s lawyers said footage was captured by at least nine cameras, and that Brown’s relatives were privately shown a 20-second clip on Monday.

Seven deputies involved in the incident have been placed on administrative leave, Wooten’s office said last week. According to lawyers for Brown’s family, two of those deputies have since resigned and one has retired.

‘Trying to evade being shot’

An official autopsy has yet to be released, although the death certificate had indicated Brown died of a gunshot to the skull.

“It was a ‘kill’ shot to the back of the head,” said attorney Ben Crump, citing the private autopsy conducted by Brent Hall, a former medical examiner in Boone, North Carolina. “It went into the base of the neck, bottom of the skull and got lost in his brain. That was the cause of death.”

Co-counsel Wayne Kendall said the first four gunshots that struck Brown, all in his right arm, were fired through his front windshield, prompting him to throw the vehicle into reverse, turn the car around and “spin off across a vacant lot.”

“At that time, he was hit in the back of the head,” and the vehicle crashed into a tree “as he was leaving the site trying to evade being shot,” Kendall said.

Shortly after the news conference, the FBI’s Charlotte Field Office said it had opened a civil rights investigation separate from the state’s probe of the shooting, to “determine whether federal laws were violated.”

Crump welcomed the FBI inquiry, saying in a statement that footage of the shooting seen by family members shows Brown was “brought down by an inflamed, modern-day lynch mob.”

Governor Roy Cooper called later for appointment of a special prosecutor to take over the state’s investigation of the killing, which will otherwise be overseen by the local district attorney, Andrew Womble.

Under state law, Womble can hand the case to a neighbouring district attorney, call for a conference of DAs to select a prosecutor to take the case or refer it to the state’s attorney general for assignment to a special prosecutor.

Brown’s death has led to six nights of protests in Elizabeth City and came one day after former Minneapolis police officer Derek Chauvin was convicted of murdering George Floyd in a trial that put a spotlight on police violence against Black people.

There were signs of lingering tension yesterday afternoon in Elizabeth City, where about 20 demonstrators blocked off an intersection near the sheriff’s office, forcing motorists to take a detour.

One driver, a middle-aged white man, was seen with a gun on the dashboard of his pickup truck after approaching protesters and complaining about the blockage, according to Reosha Christian, 35, a city resident taking part in the demonstration.

Christian said the man never pointed his weapon and pulled away after police confronted him.

Officials yesterday yimposed a dusk-to-dawn curfew on Elizabeth City, which has roughly 18,000 residents, half of whom are Black.

The Brown family’s lawyers have denounced his killing as an “execution,” and have accused authorities of withholding video evidence from the public.

Wooten has said his office is seeking court approval necessary under state law to release the video. A court hearing was scheduled for today on whether body camera footage can be disclosed to media organisations. — Reuters

These were the details of the news Lawyers say Black man killed by North Carolina police hit with ‘kill shot’ to back of head for this day. We hope that we have succeeded by giving you the full details and information. To follow all our news, you can subscribe to the alerts system or to one of our different systems to provide you with all that is new.