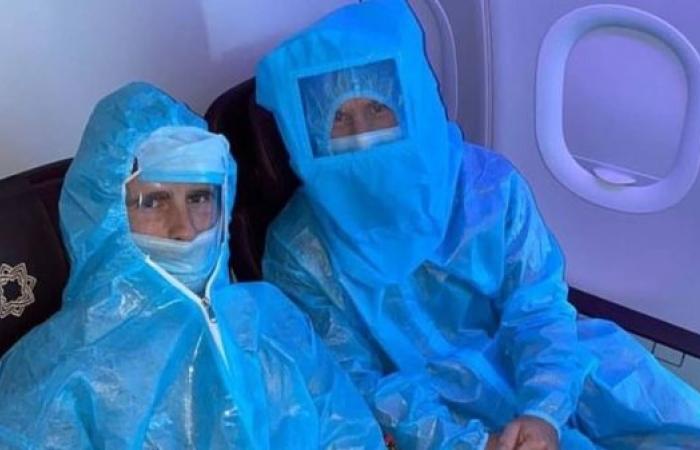 Hind Al Soulia - Riyadh - SYDNEY — As the debate intensifies as to whether the lucrative Indian Premier League (IPL) tournament should continue amid a deadly COVID-19 second wave, Australian international David Warner was adhering to strict safety protocols as he took an internal flight in the country for a match.

The 34-year-old posted on social media a photo of himself and his teammate Kane Williamson head-to-toe in full personal protective equipment, including a mask, visor and a full protective bodysuit, as they flew to Delhi for the Sunrisers Hyderabad's next match.

A number of players have already withdrawn from the IPL citing personal reasons, including three of Warner's Australian teammates — Adam Zampa, Kane Richardson and Andrew Tye.

The lucrative IPL, which runs until May 30, is a two-month festival of cricket, attracting huge contracts for the world's best players.

On Tuesday, Australian Prime Minister Scott Morrison announced a suspension to direct flights from India until May 15.

Morrison also told Australian cricketers playing in the IPL that they will not be able to return home ahead of other Australians currently stranded in the country.

"They have traveled there privately," he said. "This wasn't part of an Australian tour.

"They're under their own resources and they'll be using those resources too, I'm sure, to see them return to Australia in accordance with their own arrangements."

Cricket Australia did not respond to CNN's request for comment asking if the organization had any concerns for their players' safety or whether any contingency plans have been put in place to help them.

"I texted back that as Cricket Australia make 10 percent of every IPL contract, was there a chance we could spend that money this year on a charter flight once the tournament is over?" Lynn, who says he's "comfortable" in the bubble environment, told Reuters.

"I know there are people worse off than us. But we are going from a really tight bubble and are getting vaccinated next week so hopefully, the government will let us get home on a private charter.

"We are not asking for shortcuts and we signed up knowing the risks. But it would be great to get home as soon as the event is over."

The IPL's regular season is set to end on May 23 with qualifiers and eliminators to follow before the final on May 30.

According to Forbes, the IPL is the sixth most valuable sports league in the world, behind the NFL, the Champions League and European football's four biggest domestic leagues.

"Obviously India is in chaos at the moment but we are at least giving people something to smile about by playing the tournament," Mumbai Indians batsman Lynn added.

Earlier this week, Australian Pat Cummins, who was the most expensive foreign buy in IPL's 2020 auction, reflected on the debate about whether it's right to continue.

"I'm advised that the Indian government is of the view that playing the IPL while the population is in lockdown provides a few hours of joy and respite each day at an otherwise difficult time for the country," Cummins wrote in a statement on Twitter.

Cummins also called on IPL players to help fund medical supplies, notably oxygen supplies, to those who need it most.

"I encourage my fellow IPL players — and anyone else around the world who has been touched by India's passion and generosity — to contribute. I will kick it off with $50,000," Cummins wrote on Twitter. — CNN

These were the details of the news Australian cricketers wear full PPE on flight to Delhi for this day. We hope that we have succeeded by giving you the full details and information. To follow all our news, you can subscribe to the alerts system or to one of our different systems to provide you with all that is new.