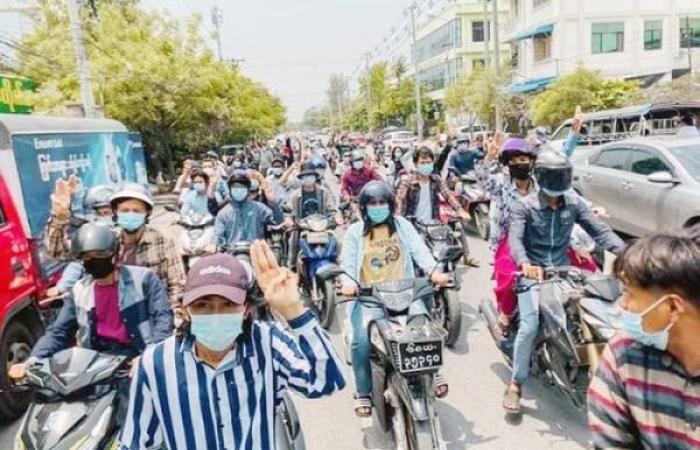 Hind Al Soulia - Riyadh - YANGON — Ethnic minority Karen insurgents have seized a military outpost near the Thai border, a sign that civil conflict will continue despite a recent pledge by the junta to end the violence.

The Karen National Union (KNU), which controls territory in eastern Myanmar near the Thai border, is a close ally of the resistance movement against the military takeover that ousted the elected government of Aung San Suu Kyi. Its armed wing is called the Karen National Liberation Army.

On Tuesday, fighting broke out in Karen state near the Salween River, which demarcates part of the border, with residents on the Thai side reporting hearing gunfire and explosions coming from inside Myanmar.

"We could hear from the other side, we could hear the bullets," said Hkara, a long-time resident of Mae Sam Laep inside the Thai border, who is ethnic Karen and only has one name.

"We saw five or six Burmese soldiers run down to the river and then we saw KNU shoot them but it was very dark."

Last month, after the KNU overran a military base, the junta responded with multiple air strikes at night — the first use of air offensives in Karen state in over 20 years.

Fighting between the KNU’s armed wing and Myanmar’s military has been intense since February. Government airstrikes began on March 27.

Myanmar jets have bombed and strafed Karen villages, and its army has deployed fresh battalions to the area, in possible preparation for a large-scale offensive.

Up to 25,000 villagers have fled their homes and are hiding in jungles and caves, according to Eubank.

There is a similar situation in northern Myanmar, where the Kachin minority claims to have captured several government outposts and been the target of air attacks.

The Karen and the Kachin are two of the bigger minority groups that have been seeking greater autonomy for decades, during which there have been periods of armed conflict punctuated by ceasefires.

The city-based resistance movement against the current ruling junta has wooed the ethnic guerrilla groups in hopes that they can form a federal army as a counterweight to the government’s armed forces.

A parallel National Unity government established by elected lawmakers prevented from taking their seats by the army has appointed representatives of several minority groups to ministerial posts.

Myanmar army chief, Min Aung Hlaing, who led military coup on Feb 1, agreed to an immediate cessation of violence during a special summit of 10-member Association of Southeast Asian Nations on April 24.

Myanmar has been in turmoil since the military ousted civilian leader Suu Kyi in a Feb. 1 coup, triggering an uprising that has seen security forces mount deadly crackdowns against protesters.

An estimated one-third of Myanmar's territory — mostly in its border regions — is controlled by a myriad of rebel groups, who have their own militias.

Security forces have killed more than 750 civilians since Feb. 1, according to a local monitoring group tracking the death toll. The junta has a much lower figure and blames the violence on "rioters". — Agencies

These were the details of the news Armed rebels in Myanmar border seize military outpost for this day. We hope that we have succeeded by giving you the full details and information. To follow all our news, you can subscribe to the alerts system or to one of our different systems to provide you with all that is new.