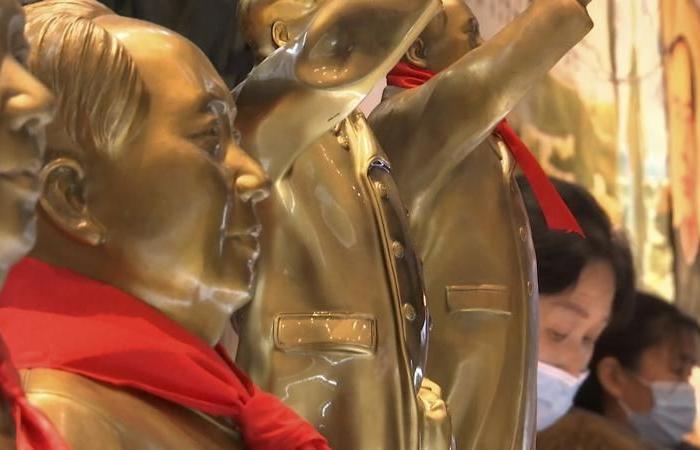 On a street where the Red Army once roamed, a group of retirees in historic pastel-blue army uniforms belt out tunes made famous through countless movies, television shows and other forms of propaganda. Historic locations in Jiangxi and Guizhou provinces — the sites of revolutionary leader Mao Zedong’s early battles, his escape from Chiang Kai-shek’s Nationalist forces in the Long March and the cementing of his leadership in Zunyi — are experiencing an influx of tourists this year as post-pandemic travel returns to China.

In Guizhou, tourism in the first quarter of 2021 has already recovered to 2019 levels, local official Lu Yongzheng said. The province, among China’s top tourist destinations, received millions of tourists who brought in billions of dollars in revenue.

On a recent government-organized tour, descendants of the Red Army told stories of their forefathers at the Zunyi Memorial Museum, which houses artifacts from the period and hologram recreations of a key meeting at which Mao established his dominance.

Kong Xia grew up listening to stories of hardships and toil and the arduous Long March, a military retreat in which her grandfather, Kong Xianquan, participated. In the epic journey, the Communists traveled over treacherous terrain to eventually establish their World War II capital in the dry northern province of Shaanxi, from which they would expand and eventually triumph over their Nationalist rivals in 1949.

Kong Xia describes her grandfather’s life to pass down stories of the Communist Party’s humble beginnings, especially to younger generations who she worries may be losing interest in history.

“They should understand (the history) but may not be interested” Kong said. “I think this kind of suffering will inspire us to cherish our happy and peaceful lives today and do our jobs well.”

In 2016, the Zunyi museum launched a traveling exhibit that tours colleges and universities throughout China. And to spur interest among younger visitors, it trained over 100 “young curators” in primary or middle school to tell fellow students about the period of history.

“They aroused a very good response especially among the visitors of their age,” said the museum’s deputy curator, Zhang Xiaoling.

Crowds of tourists also visit the mountain ranges of Jinggangshan in Jiangxi province, known as the “cradle of the Chinese Revolution,” where Mao fought his early battles and the revolutionary army was formed.

The rise in tourism is also spurred by a campaign announced by President Xi Jinping in February to educate the Communist Party’s 91 million-plus members on its history and ideology.

True to the campaign, Bi Qiumei, who is in her early 70s, says she came to the museum “to pay homage to the revolutionary martyrs and Mao Zedong, and to see how China’s revolution succeeded.” She has been a party member since 1983.

“We are very excited,” she chuckles, with old friends and classmates in tow.

Villages around the historic sites are anticipating an influx of tourists marking the centennial.

Enveloped by the mountain ranges is Mayuan, an idyllic village of just over 1,000 people. Flowers adorn newly paved concrete roads lined with rows of guest houses in an area where Mao’s forces once trained for guerrilla warfare.

Government poverty alleviation programs and arrivals of tourists prompted one villager, Xie Xiaomin, to return to Mayuan to build his own guest house in 2017.

“I’m full of confidence about this year” because of the centennial, Xie said.

Xie’s grandfather, Yuan Wencai, helped establish a revolutionary base in the village and fought with Mao’s army.

Photographs of his grandfather in his youth and of his grandmother posing with Mao and revolutionary General Zhu De decorate the guesthouse’s entranceway.

Such personal stories will become part of the tourists’ Mayuan experience.

“I would like to speak as long as there’s a need and they’re willing to listen to me.” Xie said.

Events are being scheduled nationwide to mark the anniversary, including exhibitions, films, plays, concerts and awards for long-serving party members. A ceremony is also expected on July 1, the day the nation marks the centennial, with a speech by President Xi Jinping.

These were the details of the news ‘Red Tourism’ draws Chinese on centennial of Communist Party for this day. We hope that we have succeeded by giving you the full details and information. To follow all our news, you can subscribe to the alerts system or to one of our different systems to provide you with all that is new.