2 die, more than 100 test positive in COVID-19 outbreak among US diplomatic staff in India 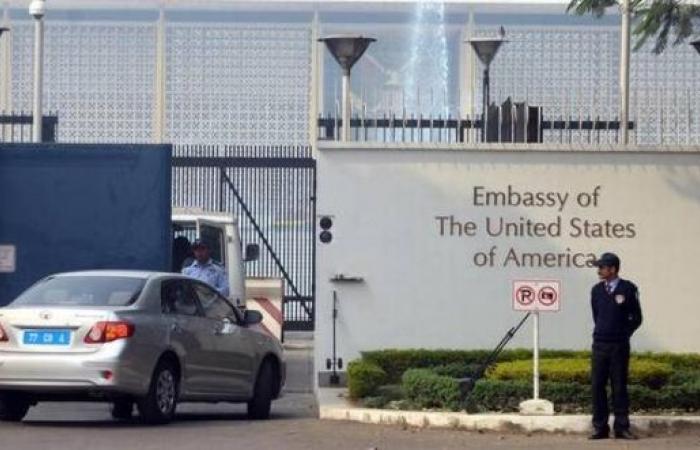 We show you our most important and recent visitors news details 2 die, more than 100 test positive in COVID-19 outbreak among US diplomatic staff in India in the following article

Hind Al Soulia - Riyadh - NEW DELHI — There has been a major coronavirus outbreak among US diplomatic staff in India with two locally employed staff dying and more than 100 people testing positive in recent weeks as the country struggles to cope with a dramatic surge of the deadly disease, two sources familiar with the situation said.

Reported COVID-19 case rates in India have hit global highs for the past five consecutive days, hospitals have run out of beds, medicine, ventilators and oxygen, and thousands have died amid a devastating second wave, which began last month.

The sources did not provide details where in the country the staff died and tested positive but the US operates five consulates in different cities and an embassy in the capital of New Delhi.

US personnel, family members and locally employed staff in India only began receiving their Covid vaccines within the past two weeks, one of the sources said. Within the past six weeks — even as India's case rates were ticking up and staff had not yet been vaccinated — there were two high-level trips by Biden administration officials to the country.

One source said that the State Department had worked to get vaccines to locations where personnel live on campus -- including in Kabul and Baghdad -- which may have contributed to the Mission being so late in the queue. However, as one source noted, the vaccines "came too late for the two people who died ... it's horrible."

There were frustrations earlier this year from diplomats overseas about the pace at which they got the vaccines, which Secretary of State Tony Blinken acknowledged in remarks in February. State Department spokesperson Ned Price said earlier this month that as of April 18, the "department (had) completed deployment of vaccines to all of our posts abroad."

Much of the workforce is working from home due to the pandemic, sources said, and last week, the Embassy in the Indian capital of New Delhi moved to have even fewer staff work in person.

A State Department spokesperson said that the "Department has no higher priority than the safety and security of its employees."

"We are closely monitoring the situation and we will take all necessary measures to safeguard the health and well-being of our employees, including offering vaccines to employees," they said.

Secretary of Defense Lloyd Austin arrived on March 19 and Special Presidential Envoy for Climate John Kerry on April 6, meaning both officials visited before the State Department had provided embassy or consulate personnel who handled their visit with any vaccines.

Sources said there was some consternation around the visits because at the time of the officials' arrivals, there were already surging cases in parts of India and warnings about an increased risk of transmission from the spring holidays. Although personnel involved in the trips might have been working in the office already, such high-level visits involve in-person meetings with Indian officials both while the VIPs are on the ground and in the planning phase. While sources said there were anecdotal reports of positive coronavirus cases in the wake of the trips, it is unclear if they were directly linked to the visits.

Now, there are questions about the plan in place in case of medical emergencies as the healthcare infrastructure in India is pushed to a breaking point. There are concerns about access to emergency services, not just for Covid, as hospitals are filled to capacity as well as fears about the potential suspension of international flights back to the United States.

At the outset of the global coronavirus pandemic, the State Department "authorized the departure from any diplomatic or consular post in the world of US personnel and family members who have been medically determined to be at higher risk of a poor outcome if exposed to COVID-19," and once that was revoked for posts worldwide, it was issued on a country-by-country basis. As of Monday, the State Department had not authorized departure for personnel from India.

On Monday, the US Consulate in Chennai said in a tweet: "Considering current COVID-19 conditions, all routine services at @USAndChennai are canceled from April 26 through May 15, including all routine non-immigrant visa interview appointments, interview waiver appointments, and routine American Citizen Services appointments." The Embassy in New Delhi said Friday that "in-person visa appointments and interview-waiver appointments are canceled from April 26 — May 9 in light of current pandemic conditions." On April 9, the consulate in Mumbai said it would "provide only essential consular services until further notice."

As yet the United States has not provided India with coronavirus vaccines to help combat the outbreak in the country. On Monday, President Joe Biden spoke with Indian Prime Minister Narendra Modi "committing that the United States and India will work closely together in the fight against COVID-19," according to a White House readout.

"The President pledged America's steadfast support for the people of India who have been impacted by the recent surge in COVID-19 cases," the readout said. "In response, the United States is providing a range of emergency assistance, including oxygen-related supplies, vaccine materials, and therapeutics." — CNN

These were the details of the news 2 die, more than 100 test positive in COVID-19 outbreak among US diplomatic staff in India for this day. We hope that we have succeeded by giving you the full details and information. To follow all our news, you can subscribe to the alerts system or to one of our different systems to provide you with all that is new.