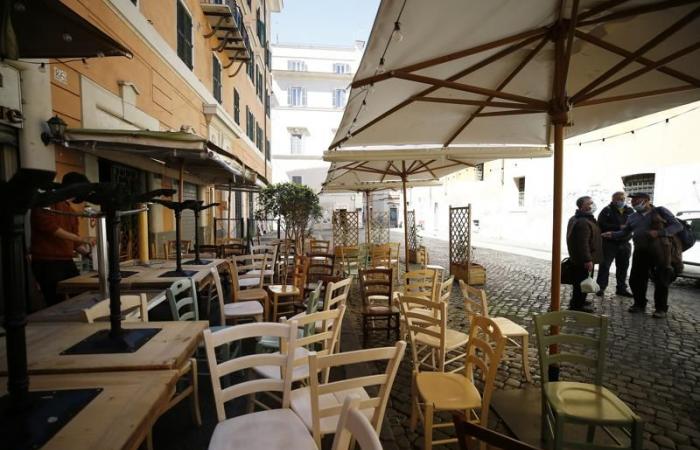 You are now following the details of the Packed parks, lurking virus? Worries mount as Italy reopens news and now we leave you with the details

Mohamed Nass - Cairo - MILAN (AP) — Italy’s gradual reopening on Monday after six months of rotating virus lockdowns is satisfying no one: Too cautious for some, too hasty for others.

Allowing outdoor dining comes too little, too late for Italy’s restaurant owners, whose survival is threatened by more than a year of on-again, off-again closures. The country’s continued 10 p.m. curfew puts a damper on theater reopenings, and is seen as bad public relations for Italy’s key tourism industry, which hopes the second summer of the pandemic can finally see the return of overseas visitors. The government has also been facing strong pressure to reopen from Italy’s right-wing parties.

Yet the nation’s weary virologists and medical workers worry that even the tentative reopening planned by Premier Mario Draghi’s government will invite a free-for-all that risks a new virus surge before the current one is truly tamped down.

“Unfortunately, as I have had to repeat often: The virus does not negotiate. The virus, moreover, has succeeded in adapting itself, becoming more aggressive and more widespread,” said Professor Massimo Galli of Milan’s Sacco Hospital.

In a preview of what many fear, Italians on Sunday — a day before the virus restrictions loosened — crowded the streets, squares and parks of cities from Rome to Turin, Milan to Naples, as warmer weather pushed aside an unusually cold spring.

Recognizing the risks, Italy’s interior ministry instructed law enforcement officers on Sunday to make sure that social distancing and mask-wearing were enforced so that the loosening of restrictions doesn’t translate into a new virus spike.

Italy has the second-deadliest pandemic toll in Europe after Britain, with over 119,000 confirmed deaths. And experts say that number is low because more Italians suspected of having COVID-19 died in spring 2020 before they could be tested.

By Monday, 15 of Italy’s 21 regions and autonomous provinces will be under the lowest levels of coronavirus restrictions, with inter-regional travel allowed for the first time since the fall. The number of people who can visit friends and family at any one time will double from two to four. Restaurants and bars will be able to seat people for open-air dining. Contact sports can resume outdoors.

However, plans to fully reopen Italian high schools for the last six weeks of the school year ran up against inadequate public transport and had to be scaled back to a minimum of 70% in-person schooling for the upper grades.

Four southern regions — Basilicata, Calabria, Puglia and Sicily — along with tiny Aosta on the French border in the north remain under stronger, second-tier virus restrictions.

The Italian island of Sardinia — the only region entirely free of restrictions this winter — was plunged into the red zone in mid-April after the all-clear signal resulted in a surge of new infections. Sardinia has become a cautionary tale cited by Italian virologists.

The reopenings come even as Italy’s intensive care wards remain above the 30% threshold for alarm. Italy’s vaccine campaign is also still well shy of its 500,000-shots-a-day goal, and is only now moving to protect people in the 70-79 age bracket. The World Health Organization says people over 65 have accounted for the vast majority of COVID-19 deaths in Europe.

“There are two words that should guide us in the next days,″ Health Minister Roberto Speranza said Sunday. ”Trust, because the measures have worked, and prudence. We need to take one step at a time, be gradual and evaluate the evolution day by day.”

Image: Chairs and tables are being prepared outside a restaurant ahead of Monday’s reopening following the ease of COVID-19 restrictions, in Rome, Friday, April 23, 2021. Even Italy’s tentative reopening is satisfying no one. Outdoor dining is too little, too late for restaurant owners whose survival is threatened by a year of rotating closures. Yet the nation’s weary virologists worry that Monday, April 26, 2021, will see people crowding bars and restaurants and bring yet another spike to the virus that has not really properly receded yet. (Cecilia Fabiano/LaPresse via AP)

These were the details of the news Packed parks, lurking virus? Worries mount as Italy reopens for this day. We hope that we have succeeded by giving you the full details and information. To follow all our news, you can subscribe to the alerts system or to one of our different systems to provide you with all that is new.