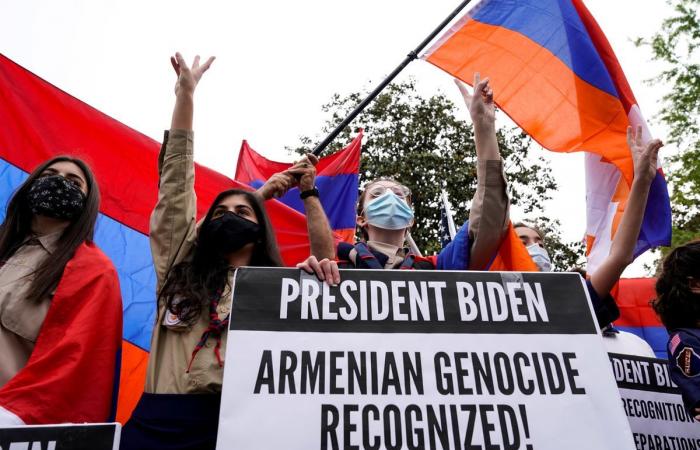 Biden broke on Saturday with decades of carefully calibrated White House comments over the 1915 killings, delighting Armenia and its diaspora but further straining ties between Washington and Ankara, both members of the NATO military alliance.

“There will be a reaction of different forms and kinds and degrees in coming days and months,” Ibrahim Kalin, President Tayyip Erdogan’s spokesman and adviser, told Reuters in an interview.

Kalin did not specify whether Ankara would restrict US access to the Incirlik air base in southern Turkey, which has been used to support the international coalition fighting Islamic State in Syria and Iraq, among measures it may take.

After other Turkish officials swiftly condemned Biden’s statement on Saturday, Erdogan would address the issue after a cabinet meeting on Monday, Kalin said. “At a time and place that we consider to be appropriate, we will continue to respond to this very unfortunate, unfair statement,” he said.

Turkey accepts that many Armenians living in the Ottoman Empire were killed in clashes with Ottoman forces in World War One, but denies the killings were systematically orchestrated and constitute genocide.

For decades, measures recognizing the Armenian genocide stalled in the US Congress and most US presidents have refrained from calling it that, held back by concerns about straining relations with Turkey.

But those relations are already troubled. Washington imposed sanctions on Turkey over its purchase of Russian air defenses, while Ankara has been angered that the United States has armed Kurdish YPG fighters in Syria and not extradited a US-based cleric Turkey accuses of orchestrating a 2016 coup attempt.

Navigating those disputes will now be even harder, Kalin said. “Everything that we conduct with the United States will be under the spell of this very unfortunate statement,” he said.

Kalin said Turkey’s parliament is expected to make a statement this week. Analysts say lawmakers may hit back rhetorically against Biden by classifying the treatment of Native Americans by European settlers as genocide.

As well as limiting access to Incirlik, Turkey also has options to reduce military coordination with the United States in northern Syria and Iraq or scale down diplomatic efforts to support Afghan peace talks, said Ozgur Unluhisarcikli, director of the German Marshall Fund research group in Ankara.

In reality, though, Erdogan’s options are limited as he is already battling one of the highest rates of daily COVID-19 cases globally and has seen the lira currency fall close to all-time lows against the dollar last week.

“This is a difficult period for Turkey and it’s not a time when Turkey wants to pick a fight with anyone, let alone the United States,” Unluhisarcikli said.

Kalin said US officials had told Turkey the declaration would not provide any legal basis for potential reparation claims.

Nevertheless, Erdogan told the US president when they spoke by phone on Friday, their first conversation since Biden took office three months ago, that it would be a “colossal mistake” to go ahead with his statement.

“To reduce all that to one word and try to implicate that Turks were involved, our Ottoman ancestors were involved in genocidal acts, is simply outrageous,” Kalin said.

“It’s not supported by historical fact”.

IMAGE: Members of the Armenian diaspora rally in front of the Turkish Embassy after US President Joe Biden recognized that the 1915 massacres of Armenians in the Ottoman Empire constituted genocide in Washington, US, April 24, 2021. REUTERS/Joshua Roberts

These were the details of the news Turkey says it will respond in time to ‘outrageous’ US genocide statement for this day. We hope that we have succeeded by giving you the full details and information. To follow all our news, you can subscribe to the alerts system or to one of our different systems to provide you with all that is new.

PREV Denmark drops Johnson and Johnson's COVID-19 vaccine due to side effects concerns
NEXT Global e-commerce jumps to $26.7 trillion, fueled by COVID-19