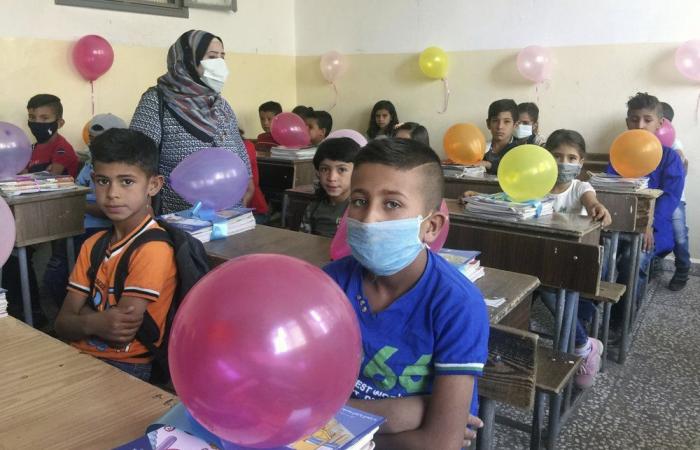 Syria has witnessed a sharp increase in cases in recent weeks leading to the closure of schools and universities as well as some state institutions.

Some 1.5 million students from fifth grade through high school went to 10,550 schools to take exams amid measures to prevent the spread of the virus, including wearing masks and sanitizing classrooms, SANA said.

The exams are being given nearly a month earlier than scheduled as schools will close early this year because of the pandemic that has sickened tens of thousands of people in the war-torn country.

SANA quoted a Ministry of Education official as saying that over the past two days all schools were sanitized in preparation for the exams in government-held areas.

Tens of thousands of people have tested positive for the virus in Syria, including about 22,000 in government held parts of the country. More than 1,500 people have been killed by COVID-19 in areas under the control of President Bashar Assad’s government.

Sunday’s exams came a day after the Syrian government received the first batch of Chinese COVID-19 vaccines, a gift of 150,000 jabs to Damascus.

The Chinese batch came a few days after more than 200,000 jabs were delivered to Syria through the United Nations-led platform that provides vaccines to the needy.

The UN-provided AstraZeneca vaccines were part of the UN-led campaign aiming to vaccinate 20 percent of the country’s population before the end of the year. Frontline workers, the elderly and those with chronic diseases were priority.

In Syria, the government controls about two-thirds of the territory, with the rest held by opposition fighters and Kurdish factions. Millions have fled the country or been displaced, and the war has killed some half a million people.

These were the details of the news Syria schools begin final exams weeks early because of virus for this day. We hope that we have succeeded by giving you the full details and information. To follow all our news, you can subscribe to the alerts system or to one of our different systems to provide you with all that is new.

PREV The Latest: Erdogan rallies Muslim leaders against Israel
NEXT Poll: Most in US who remain unvaccinated need convincing