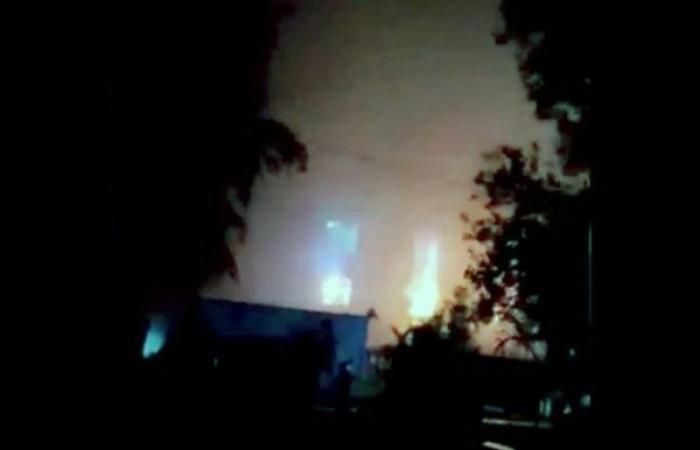 We show you our most important and recent visitors news details 82 die, scores hurt in Iraq’s COVID-19 hospital blaze in the following article

Hind Al Soulia - Riyadh - BAGHDAD — At least 82 people have been killed in a fire at a hospital treating coronavirus patients in the capital of Iraq, Baghdad. More than 100 others were injured in the blaze, which erupted at the Ibn Al-Khatib Hospital.

The incident occurred late on Saturday night when several oxygen cylinders exploded, setting a huge fire at Ibn Al-Khatib Hospital, which is dedicated to treating coronavirus patients on the eastern side of the capital, said a statement released by the country's Civil Defense.

Reports say an accident had caused an oxygen tank to explode, sparking the blaze. Videos on social media show firefighters scrambling to extinguish the flames as people flee the building.

Civil Defense teams and firefighting vehicles arrived at the scene to put out the fire and were able to prevent the fire from reaching the upper floors, the statement said.

They also rescued some 90 patients and health workers who were surrounded by flames in the building, the statement said.

"Many patients were affected by the cut of oxygen cylinders during their evacuation from the hospital, and others suffocated by the smoke," the statement added.

He also called for “an immediate investigation with those in charge at the ministry” and demanded that the “hospital director, head of security and the technical maintenance team be sent to the investigators and not be released until those at fault have been brought to justice”.

The head of Iraq's Civil Defense, Gen Kadhim Bohan, said the fire had broken out in the hospital's intensive-care unit, on a floor "designated for pulmonary resuscitation".

About "30 patients were in the intensive care unit", which was reserved for the most severe cases of COVID-19 in Baghdad, a hospital source told the AFP news agency.

In a statement, the government's human rights commission said the incident was "a crime against patients exhausted by COVID-19".

Emergency service officials said many patients died when they were taken off oxygen machines to be evacuated, while others were suffocated by smoke.

"Once the fire started somebody needed to put the auto central pipes off, which means basically cutting the oxygen from those who need it most," Halla Sarraf, the director of Iraqi Health Access, a non-governmental organization, told the BBC.

On Wednesday, the number of COVID-19 cases in Iraq surpassed one million, the highest of any Arab state. The Health Ministry has recorded 15,217 deaths since the country’s first infections were reported in February 2020.

The country launched its vaccination campaign last month, and has received nearly 650,000 doses, most of which have come from Covax, a global program for sharing jabs. — Agencies

These were the details of the news 82 die, scores hurt in Iraq’s COVID-19 hospital blaze for this day. We hope that we have succeeded by giving you the full details and information. To follow all our news, you can subscribe to the alerts system or to one of our different systems to provide you with all that is new.