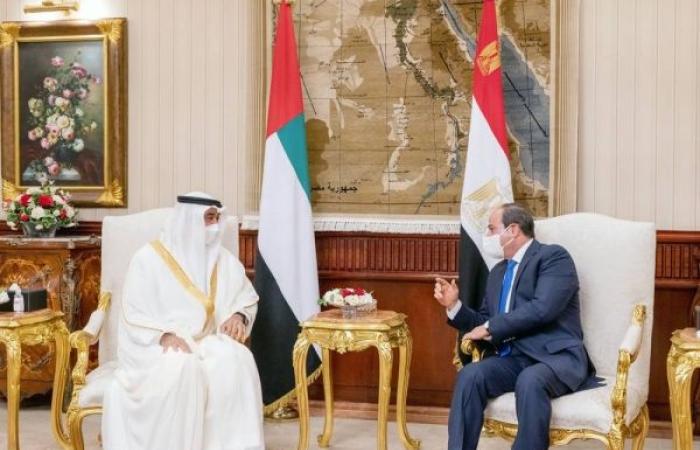 We show you our most important and recent visitors news details Mohamed Bin Zayed, Sisi discuss latest regional developments in the following article

This came as the Egyptian president welcomed Sheikh Mohamed and his accompanying delegation here, where they deliberated the latest regional and international developments of interest in the presence of Sheikh Mansour Bin Zayed Al Nahyan, deputy prime minister and minister of presidential affairs.

During the meeting, the two sides discussed the latest developments of the global battle against COVID-19 and the two countries' efforts to stem the fallout of the pandemic.

At the beginning of the meeting, Sheikh Mohamed and the Egyptian president exchanged Ramadan greetings, and prayed to Allah Almighty to bless the peoples of the two countries and the rest of the Arab and Islamic world, and humanity at large, with more peace and prosperity.

Sheikh Mohamed conveyed to the Egyptian president the greetings of President Sheikh Khalifa Bin Zayed Al Nahyan, wishing him continued good health and wellbeing and more progress and prosperity to the people of Egypt.

Sheikh Mohamed re-affirmed the UAE's determination to maintain continual channels of coordination and discussions with Egypt regarding ways of addressing regional issues and crises.

For his part, the Egyptian president emphasized Egypt's commitment to its firm and principled position toward the security of the Gulf and its rejection of all practices that threaten its stability.

He added that Sheikh Mohamed's visit gives further impetus to the longstanding and strategic relations between the two countries and consolidates their joint action to the best interest of their peoples and their ambitions for more development and prosperity.

El-Sisi hosted an Iftar banquet in the honor of Sheikh Mohamed and his accompanying delegation. Sheikh Mohamed left Cairo following the meeting and was seen off by the Egyptian president. — WAM

These were the details of the news Mohamed Bin Zayed, Sisi discuss latest regional developments for this day. We hope that we have succeeded by giving you the full details and information. To follow all our news, you can subscribe to the alerts system or to one of our different systems to provide you with all that is new.