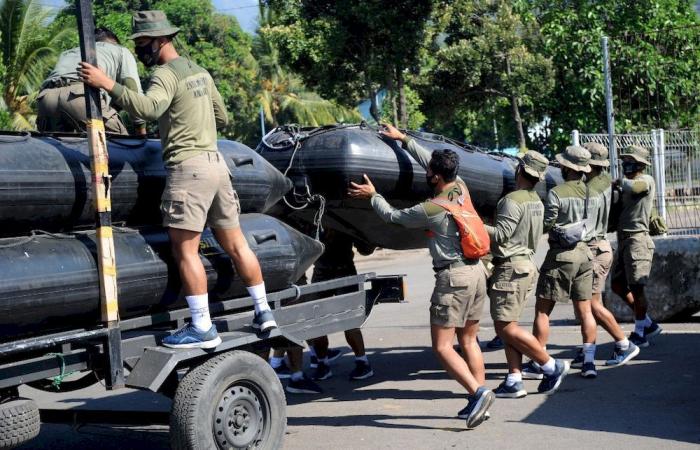 BALI, April 25 — The hunt for a missing Indonesian submarine with 53 crew turned into a salvage effort today after recovered debris suggested it broke apart as it sank off the coast of Bali.

Warships, planes and hundreds of military personnel had led a frantic search for the KRI Nanggala 402 since it disappeared this week during training exercises, hoping for a miracle rescue before its known oxygen reserves ran out.

But the navy acknowledged yesterday that pieces of the submarine, including items from inside the vessel, had been retrieved.

They declared that it had sunk, effectively ending any chance of finding survivors.

Among the items recovered was a piece of the torpedo system and a bottle of grease used to lubricate periscopes.

They also found a prayer mat commonly used in Indonesia, the world’s most populous Muslim-majority nation.

The relatives of First Lieutenant Muhammad Imam Adi, a 29-year-old father of a young son, clung to hope.

“My wish for now is that my son and all the crew can be found,” Adi’s father Edy said from his home on Java island.

“My son had wanted to become a soldier since he was a child. That was his dream.”

Authorities have not given an official explanation for the accident, but said that the submarine may have suffered a blackout and left its crew unable to resurface.

Navy chief Yudo Margono discounted an explosion, however, saying yesterday that the evidence suggested the submarine came apart as it was crushed by water pressure at depths of more than 800 metres (2,600 feet) — well below what the Nanggala was built to withstand.

Authorities have warned that any salvage operation would be risky and difficult in the deep waters.

Singapore’s MV Swift Rescue — a submarine rescue vessel — has arrived to aid in the recovery effort, the navy said today.

Neighbouring Malaysia, as well as the United States, India and Australia, were among the nations helping in the search.

Search vessels, reconnaissance aircraft and submarine rescue ships have been deployed to scour a zone of about 10 square nautical miles (34 square kilometres).

The submarine — one of five in Indonesia’s fleet — disappeared early Wednesday while it was scheduled to do live torpedo training exercises off Bali.

The crew asked for permission to dive. It lost contact shortly after.

Later, search teams spotted an oil spill where the vessel was thought to have submerged, pointing to possible fuel-tank damage, and a catastrophic accident.

So far, authorities have not commented on questions about whether the decades-old vessel was overloaded, but they have said that the submarine — delivered to Indonesia in 1981 — was seaworthy. — AFP

These were the details of the news Salvage effort under way for Indonesian submarine that sank with dozens aboard for this day. We hope that we have succeeded by giving you the full details and information. To follow all our news, you can subscribe to the alerts system or to one of our different systems to provide you with all that is new.