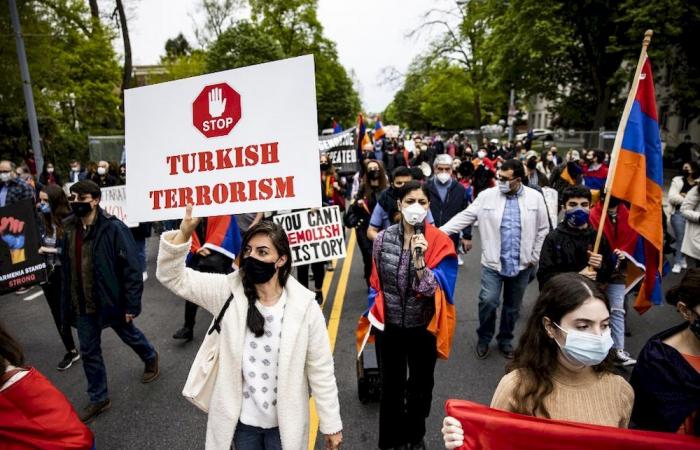 NEW YORK, April 25 — President Joe Biden’s recognition of the Armenian genocide was met yesterday by tempered satisfaction from the nation’s US diaspora, with some saying the words need to result in more pressure against Turkey.

“It’s a middle step, because (Biden) didn’t say Turkey,” said Yvette Gevorkian, who was among some 400 people who marched in New York City to mark the memory of the World War I-era killings.

“But it’s a victory for all this time we’ve been working towards,” added the 51-year-old who arrived in the United States from Iran at the age of nine.

As many as 1.5 million Armenians are estimated to have been killed from 1915 to 1917 during the waning days of the Ottoman Empire, which suspected the Christian minority of conspiring with adversary Russia in World War I.

Armenian populations were rounded up and deported into the desert of Syria on death marches in which many were shot, poisoned or fell victim to disease, according to accounts at the time by foreign diplomats.

Turkey, which emerged as a secular republic from the ashes of the Ottoman Empire, acknowledges that 300,000 Armenians may have died but strongly rejects that it was genocide.

It’s a delicate issue for Nato ally Turkey, and nations like France, Germany and Canada that have recognised the genocide.

“One side you say ‘I recognize the Armenian genocide’ but at the same time, you’re giving (Turkey) technology, you support their army,” said 40-year-old Mher Janian of the Armenian National Committee of America grassroots group.

Still, it’s “a step toward the future for reparations, for good relationship with our neighbours,” he added.

Recognition has been a top priority for Armenia and Armenian-Americans, with calls for compensation and property restoration over what they call Meds Yeghern — the Great Crime — and appeals for more support against Turkish-backed neighbour Azerbaijan.

Marchers also gathered in Los Angeles, home to one of the largest Armenian communities in the world, to mark the day with Armenian flags and calls for accountability.

“Turkey must pay, Turkey will pay,” the crowd chanted, while some held “Thank you Biden” signs.

Born in Turkey, Armenia, Iran, Syria, Lebanon or even the United States, Armenian Americans have taken many routes but share a history that remains unforgotten.

Ani Tervizian, who attended the New York rally, told of her grandmother recounting how her own mother and uncle had been victims of massacre.

“The fact that so many generations have passed and you see all these youths that feel Armenian in a foreign land, to me, that’s victory,” the 58-year-old said.

The simple fact of the recognition was welcomed by people who hope nations can remember the horror of the killings and stop them from happening again elsewhere.

“The goal is not to alienate us from our allies but rather to bring to awareness that justice should prevail. We have to take action to prevent future genocide and massacres,” said Archbishop prelate Anoushavan Tanielian of the Eastern Prelacy of the Apostolic Church of America. — AFP

These were the details of the news US Armenians welcome ‘little step’ after genocide recognition for this day. We hope that we have succeeded by giving you the full details and information. To follow all our news, you can subscribe to the alerts system or to one of our different systems to provide you with all that is new.