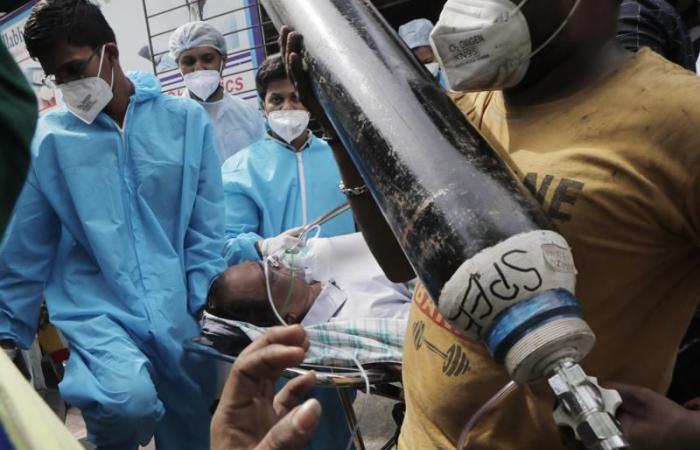 The 346,786 infections over the past day brought India’s total past 16 million, behind only the United States. The Health Ministry reported another 2,624 deaths in the past 24 hours, pushing India’s COVID-19 fatalities to 189,544.

Hospitals in the capital, New Delhi, and some of the worst-hit states like Maharashtra reported being critically short of beds and oxygen. Families were waiting for days to cremate their loved ones at overburdened crematoriums, with many turning to makeshift facilities for last rites.

“Every hospital is running out (of oxygen). We are running out,” Dr. Sudhanshu Bankata, executive director of Batra Hospital, a leading hospital in the capital, told New Delhi Television channel.

“Our supply was delayed by seven-eight hours on Friday night and the stock we received last night is only 40% of the required supply,” the newspaper quoted the hospital’s medical superintendent, Dr. D.K. Baluja, as saying.

The government ramped up its efforts to get medical oxygen to hospitals using special Oxygen Express trains, air force planes and trucks to transport tankers.

But the crisis in the country of nearly 1.4 billion people was deepening, amid criticism of the government’s response and allegations that the scarce supplies of oxygen had been diverted by local officials to hospitals in their areas. The Supreme Court told Prime Minister Narendra Modi’s government last week that it wanted a national plan for the supply of oxygen and essential drugs for the treatment of coronavirus patients.

The court acted as India’s fragile and underfunded health system was tattering, just months after leaders in the world’s second most populous country thought they had weathered the worst of the pandemic.

When the news anchor asked Bankata what happens when a hospital issues an SOS call as his had done, Bankata replied: “Nothing. It’s over. It’s over.”

As the oxygen scarcity deepened, local officials in several states disrupted movement of tankers and diverted supplies to their areas.

On Friday, the Press Trust of India news agency reported that a tanker-truck carrying oxygen supplies in Delhi’s neighboring state of Haryana went missing. Days before, the news agency reported, a minister in Haryana blamed Delhi authorities for looting an oxygen tanker when it was crossing their territory.

“Unfortunately, many such incidents have occurred and have dire effect on hospitals in need of oxygen supplies,” said Saket Tiku, president of the All India Industrial Gases Manufacturers Association.

Meanwhile, Dr. Anthony Fauci, the Biden administration’s top medical adviser on the pandemic, said the U.S. Centers for Disease Control and Prevention is working with its counterpart agency in India to provide technical support and assistance.

“It is a dire situation that we’re trying to help in any way we can,” Fauci said at the White House coronavirus briefing.

“They have a situation there where there are variants that have arisen. We have not yet fully characterized the variants and the relationship between the ability of the vaccines to protect. But we’re assuming, clearly, that they need vaccines,” he said.

Image: FILE – In this April 23, 2021, file photo, Health workers carry a patient after a fire in Vijay Vallabh COVID-19 hospital at Virar, near Mumbai, India. India is battling the world’s fastest pace of spreading infections. Its government has blocked vaccine exports for several months to better meet needs at home, exacerbating the difficulty of poor countries to access vaccine. (AP Photo/Rajanish Kakade, File)

These were the details of the news India virus patients suffocate from low oxygen amid surge for this day. We hope that we have succeeded by giving you the full details and information. To follow all our news, you can subscribe to the alerts system or to one of our different systems to provide you with all that is new.