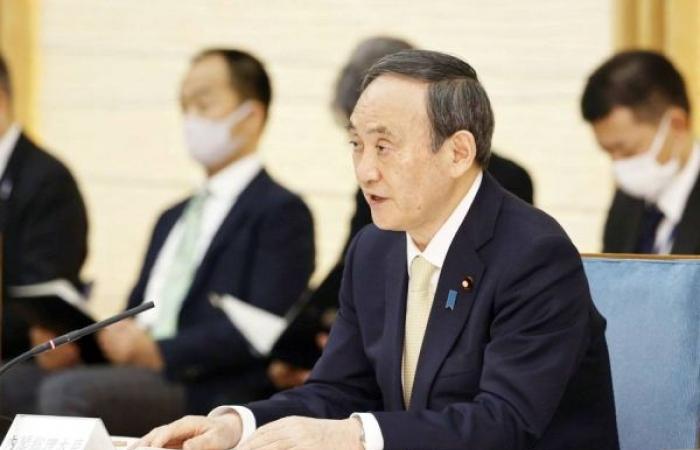 We show you our most important and recent visitors news details State of emergency declared in Tokyo, Osaka region as virus surges in the following article

Hind Al Soulia - Riyadh - TOKYO — Prime Minister Yoshihide Suga declared a state of emergency Friday in Tokyo and the western Japan prefectures of Osaka, Kyoto and Hyogo in an effort to curb a surge in coronavirus cases during the upcoming Golden Week holidays.

Tougher restrictions, such as banning restaurants and bars from serving alcohol, asking department stores and movie theaters to close temporarily, and barring fans at sports games, will be in place from Sunday through May 11.

The emergency declaration, covering roughly a quarter of Japan's population of 126 million and about a third of its economy, comes with just three months to go until the Tokyo Olympics begin.

"We will implement short and intensive measures during Golden Week, strengthening steps related to eating establishments and temporarily halting the flow of people," Suga said in announcing the decision at a COVID-19 task force meeting.

While the state of emergency does not entail a hard lockdown like some other countries have imposed and largely relies on the cooperation of people and businesses, the measures have more teeth than the previous declaration in January.

Spectators will be effectively banned from large events such as sports games and concerts. Train and bus operators will be asked to end operations earlier on weeknights, with reduced services on weekends and holidays.

Eating establishments will be required to close by 8 p.m., while those serving alcohol or offering karaoke services will be made to close entirely, with a fine of up to 300,000 yen ($2,800) for offenders.

Commercial facilities with a floor area of more than 1,000 square meters, including department stores, shopping malls, movie theaters and amusement parks, will also be asked to shut, with the exception of sections selling daily necessities. Schools will remain open, though universities are encouraged to conduct classes online.

Tokyo Gov. Yuriko Koike said she will also ask smaller businesses such as gyms, video game arcades and pachinko parlors to close and will request neon signs and other lights to be turned off after 8 p.m. to discourage people from going out at night, saying at a press conference the situation is "critical and severe."

At just over two weeks, Japan's third state of emergency of the pandemic is much shorter than the previous ones, underscoring Suga's desire to prevent the world's third-largest economy from taking a big hit. The first began in April last year and lasted seven weeks, while the second from January was two and a half months long.

The emergency declaration may be extended if the situation does not improve sufficiently, said Shigeru Omi, an infectious disease expert who chairs a government subcommittee on the coronavirus response.

A quasi-state of emergency is already in effect in the major cities of Tokyo, Osaka and Kyoto as well as in Hyogo and six other prefectures, consisting of measures including the 8 p.m. cutoff for restaurants and bars, and capping attendance at large events at 5,000.

But they have been unsuccessful in bringing down coronavirus cases, with the nationwide tally of new infections surpassing 5,000 for a third consecutive day on Friday.

Osaka, currently experiencing the worst outbreak in the country, reported more than 1,000 for a fourth straight day, while Tokyo saw 759 and Hyogo logged a record 567.

Some people say they have become complacent with life under restrictions and do not believe the latest emergency declaration will have much of an effect.

"I've become used to it. It's the same measures over and over again, so I don't feel like anything is going to change," said Nana Koide, a 21-year-old university student who lives in the greater Tokyo area.

Businesses bemoaned that their earnings would inevitably take a hit. Takuya Onodera, the 39-year-old manager of an "izakaya" restaurant in the bustling Shibuya district of the capital, said half of his sales come from serving alcohol and is considering closing until the measures are lifted.

Suga pledged at a press conference to boost financial support for businesses that suffer under the state of emergency, including through a one-off cash payment from the government.

Health experts have warned of the spread of highly contagious variants of the coronavirus, primarily a type first detected in Britain. A Ministry of Health, Labor and Welfare panel estimates variants account for about 80 percent of all cases in Osaka and Hyogo and a rapidly growing share in Tokyo.

Yasutoshi Nishimura, the minister in charge of the government's coronavirus response, called on people to stay at home and refrain from nonessential outings during the state of emergency.

The growing strain on hospitals is also a concern. Osaka no longer had any hospital beds for severely ill COVID-19 patients as of Thursday.

Meanwhile, Japan has lagged behind other countries in its vaccine rollout, with only around 1 percent of its population having received at least one dose of Pfizer Inc.'s two shots. The government hopes to finish inoculating all of Japan's elderly by the end of July, Suga said.

Suga said the country's third emergency declaration will not affect the staging of the Tokyo Olympics and Paralympics, reiterating the government will continue efforts to ensure they are "safe and secure."

But public skepticism remains high, with 39.2 percent of respondents in a Kyodo News poll this month saying the Games should be canceled and 32.8 percent saying they should be rescheduled. — Kyodo

These were the details of the news State of emergency declared in Tokyo, Osaka region as virus surges for this day. We hope that we have succeeded by giving you the full details and information. To follow all our news, you can subscribe to the alerts system or to one of our different systems to provide you with all that is new.