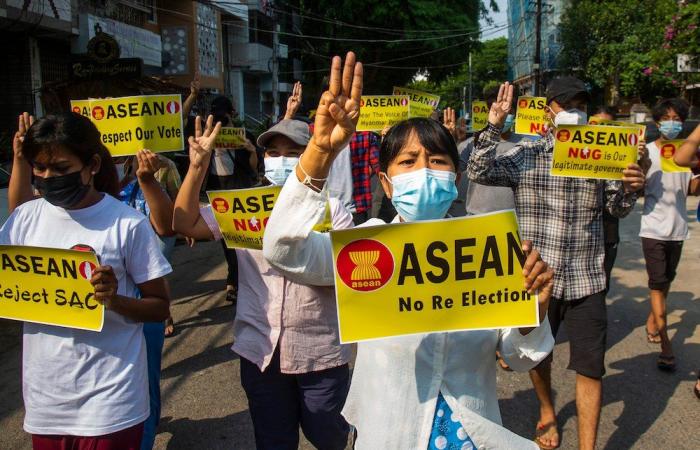 Jeddah - Yasmine El Tohamy - YANGON: A 24-year-old medical student who never imagined he would ever kill anyone, as his vocation was to save lives, did so in late March after Myanmar security forces shot dead dozens of protesting civilians in one of Yangon’s neighborhoods.

“They even used hand grenades and some kinds of explosive ammunition in cracking down on us,” the Yangon University of Medicine student, Swe Min, told Arab News.

At least 739 protesters have been killed by police and military personnel since the beginning of nationwide demonstrations against the junta that ousted the country’s elected National League for Democracy (NLD) leaders in a coup on Feb. 1, according to Friday’s data from Assistance Association for Political Prisoners Burma.

The incident in South Dagon township, where more than 30 people were killed on March 29, happened two days after the deadliest crackdown on protesters, when security forces killed 114 people across the country.

Footage shared on social media showed how a barricade built by protesting South Dagon residents was blown up with explosives by security forces.

Witnessing the state violence was beyond Swe Min’s threshold of endurance.

“There were randomly shooting and brutally assaulting residents,” he said.

Swe Min and other protesters seized a plainclothes police officer near the main demonstration site and started beating him indiscriminately.

“Seeing the slaughter of civilians, we got very upset and angry,” he recalled.

“We were out of our minds, and we have beaten and kicked him to death.”

As night raids followed the officer’s killing, Swe Min managed to escape Yangon the next morning with a group of friends.

Earlier this month, they joined a militant training camp in the mountainous eastern Karen State that borders Thailand.

“We have joined combat training a week ago,” he told Arab News over the phone from an undisclosed location. There is not much choice left for us. We have to choose to kill or to be killed.”

Arrest, torture and the daily forced disappearances of protesters since the military regime took power have pushed many like Swe Min to take up arms as they no longer seem to believe in non-violent resistance.

The Karen National Union (KNU), the oldest insurgent group fighting for the eastern state’s greater autonomy, said that thousands of people who are against the regime have sought refuge in their control area.

Padoh Man Man, a spokesperson for one of the KNU’s brigades, told Arab News that many are eager to join their combat training.

“Since they came here, most are determined to take up arms. After witnessing the momentum of brutality by the regime, it is understandable why they are in favor of armed resistance,” he said over the phone earlier this week.

The group, he added, had trained hundreds of volunteers alongside new KNU members in basic guerrilla warfare over the past two months.

“They are, therefore, more or less ready to join armed resistance,” he said.

Not only ordinary citizens but also dissident politicians are considering the option.

The Committee Representing Pyidaungsu Hluttaw (CRPH), a group of National League for Democracy (NLD) lawmakers ousted in the February coup that formed a parallel government in mid-April, has reportedly also been in negotiations with ethnic rebel groups in the hope of forming an army against the Tatmadaw — the armed forces of Myanmar.

However, this may not happen soon as, although opposed to the regime, ethnic minorities do not entirely trust NLD, which during its rule had alienated them, Sai Tun Aung Lwin, an ethnic affairs analyst and a researcher with the Yangon-based Pyidaungsu Institute, told Arab News.

“Small community-based defense units have been formed across the country, but it seems only to defend themselves at the moment,” he said. “People are doing what they have to do. They are dutiful.”

Some are even ready to abandon their monastic life.

A Buddhist monk known for his charity work in Yangon’s Hlaing Thar Yar township, who now identifies himself with a changed name, Ashin Rsara, took off his religious robes and completed combat training in Karen State.

“The regime considers us their enemy, and I witnessed the merciless crackdown in Hlaing Thar Yar last month. Then I realized that we would never have peace as long as it is in power,” he told Arab News.

“Buddha teaches us to love each other in any situation. I have been trying to follow Buddha’s teachings my whole life, but I can’t this time,” he said. “I have to live with hate till the resistance prevails or I die.”

These were the details of the news Anti-junta protesters ready for armed resistance as Myanmar violence mounts  for this day. We hope that we have succeeded by giving you the full details and information. To follow all our news, you can subscribe to the alerts system or to one of our different systems to provide you with all that is new.