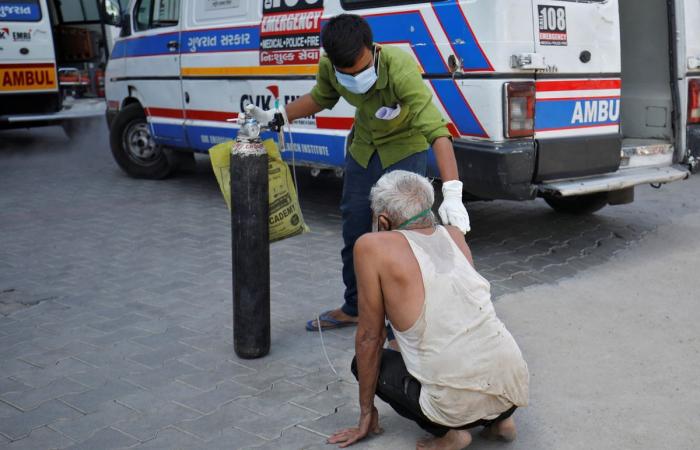 You are now following the details of the India: 22 COVID patients killed after oxygen leak news and now we leave you with the details

Mohamed Nass - Cairo - At least 22 coronavirus patients died on Wednesday in a hospital in western India after their oxygen supply was cut off because of a problem with a gas tank, a health minister said.

The disruption only lasted half an hour, but all of the patients were severely ill and in need of constant breathing support, a hospital administrator told the broadcaster NDTV.

The incident, which took place in the city of Nashik, one of India’s worst-hit areas, happened after the gas tank leaked, said Rajesh Tope, the health minister of Maharashtra state.

“Patients who were on ventilators at the hospital in Nashik have died,” Tope said in televised remarks.

“The leakage was spotted at the tank supplying oxygen to these patients. The interrupted supply could be linked to the deaths of the patients in the hospital,” he said.

The hospital has about 150 coronavirus patients, and multiple patients were being transferred to other hospitals.

The incident comes during a nationwide surge in coronavirus cases, which has created a widespread shortage of supplies of crucial gas. On Tuesday, hospitals in Delhi, the capital said they had enough oxygen left for just another eight to 24 hours, while some private institutions had enough for only four or five.

The supply situation was so severe that some people had tried to loot an oxygen tanker, forcing authorities to ramp up security, Haryana Health Minister Anil Vij. “From now, I’ve ordered police protection for all tankers,” he said.

Television showed images of people with empty oxygen cylinders crowding refilling facilities in an effort to save hospitalized relatives. Meanwhile, about 80 of 142 hospitals in Delhi had no beds left for virus patients, government figures showed.

India reported 295,041 new infections on Wednesday, marking one of the world’s highest daily national case counts. Only the United States had registered a slightly higher one-day tally of 297,430 cases in January, although the number of infections has greatly decreased since then.

IMAGE: A patient with a breathing problem is helped by his relative to enter a COVID-19 hospital for treatment, amidst the spread of the coronavirus disease (COVID-19), in Ahmedabad, India, April 19, 2021. REUTERS/Amit Dave

These were the details of the news India: 22 COVID patients killed after oxygen leak for this day. We hope that we have succeeded by giving you the full details and information. To follow all our news, you can subscribe to the alerts system or to one of our different systems to provide you with all that is new.

PREV Bahrain, Greece agree on mutual recognition of vaccination certificates
NEXT Lebanon could gradually go dark as cash for electricity runs out