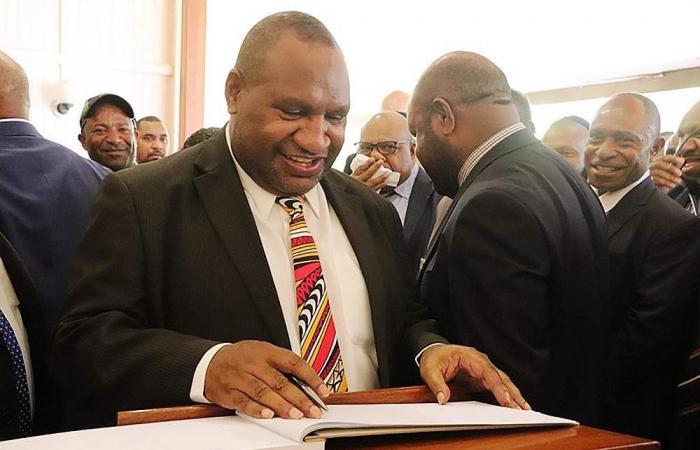 Hello and welcome to the details of PNG’s prime minister survives another bid to oust him, says report and now with the details

CANBERRA, April 22 — Papua New Guinea Prime Minister James Marape survived another attempt to remove him from office when the speaker adjourned parliament for four months, the Guardian reported today, safeguarding his position until the next election.

Marape was due to face a vote of no confidence this week but the government, citing a rampant Covid-19 outbreak, proposed an adjournment of parliament and the speaker agreed late yesterday to a four-month recess, the Guardian reported.

Resource-rich PNG’s constitution prohibits the removal of a prime minister within a year of an election so the adjournment should see Marape keep his position until the next election in July 2022.

A spokesman for the prime minister declined to comment.

“The opposition has said it will challenge the adjournment,” said Jonathan Pryke, director of the Pacific Islands Programme at the Lowy Institute, a Sydney-based think tank.

“The courts are fickle but if the adjournment holds, Marape is safe.”

Marape survived a vote of no confidence this year after the Supreme Court had ruled that a bid to delay the vote with a parliamentary adjournment was illegal.

Yesterday, it reported cases had topped 10,000, a figure that international experts say vastly underestimates the scale of the pandemic.

As PNG grapples with the rise in infections it also faces delays to its vaccination programme, which relies on supplies from the global COVAX vaccine-sharing scheme.

PNG, which has a population of about 9 million, has started a modest vaccination programme using a small number of doses sent by Australia with orders in place for more under the COVAX programme aimed at inoculating countries in need. — Reuters

These were the details of the news PNG’s prime minister survives another bid to oust him, says report for this day. We hope that we have succeeded by giving you the full details and information. To follow all our news, you can subscribe to the alerts system or to one of our different systems to provide you with all that is new.