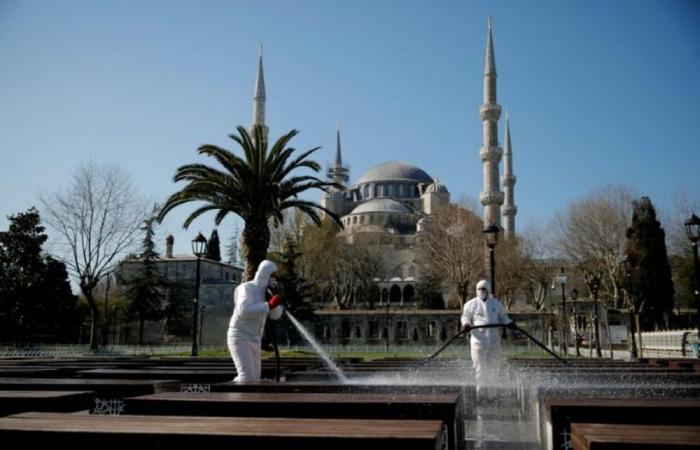 Hello and welcome to the details of Turkey’s coronavirus infections amount to one per cent of working age population, data shows and now with the details

ISTANBUL, April 20 (Reuters) - In Turkey, second only to India in new coronavirus cases, a recent surge has brought active infections to a peak equivalent to nearly 1 per cent of working age people, a calculation based on health ministry data showed today.

Deaths from Covid-19 hit a record 341 yesterday despite more than 20 million vaccines having been administered.

About 551,000 Turks have active Covid-19 cases, compared to a working age population of some 57 million, based on a Reuters calculation of official deaths, recoveries and total cases.

The country, with a population of 84 million, ranks fourth globally in new virus cases on a seven-day average, according to Reuters data. In the last two days, only far larger India has topped Turkey’s number of cases.

Istanbul and other parts of the densely populated northwest have emerged as hot spots, and President Tayyip Erdogan last week reversed course to tighten social restrictions for the Islamic fasting month of Ramadan.

The health minister said on Monday health workers are feeling the burden in Istanbul and provinces Canakkale and Tekirdag, where intensive care units are more than two-thirds full.

Up to 300 people waited outside Ankara City Hospital late into the evening on Monday after people aged 55 years and older became eligible for a shot.

“When I saw the line I thought everyone in Ankara is older than 55,” said Ayse Filiz Balkanli, 56, a retired banker who waited more than an hour.

“We were very worried at first, thinking we may catch the virus, but when we saw the line was moving fast we were relieved.”

Hikmet Dogan, a hotel worker who received his first shot in Istanbul this month, said of the rising numbers: “People are very frustrated. They want to go out and shop.”

New cases hit a peak of more than 63,000 last Friday, and have multiplied five-fold since early March when Erdogan loosened social curbs in what he called a period of “controlled normalisation”.

The U.S.-based Institute for Health Metrics and Evaluation estimates Turkey’s hospitalization rate will peak next week, and its daily death rate around May 5.

The vaccine programme began in mid-January and has delivered some 20.3 million doses, including nearly 8 million people having received two shots, government data shows.

It has relied on Sinovac’s CoronaVac shot but this month added jabs by Pfizer and BioNTech. — Reuters

These were the details of the news Turkey’s coronavirus infections amount to one per cent of working age population, data shows for this day. We hope that we have succeeded by giving you the full details and information. To follow all our news, you can subscribe to the alerts system or to one of our different systems to provide you with all that is new.