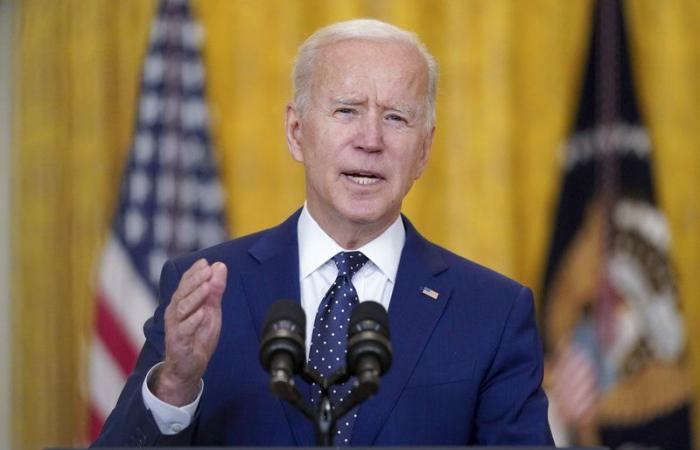 You are now following the details of the As Biden improves with vets, Afghanistan plan a plus to some news and now we leave you with the details

Mohamed Nass - Cairo - ELM GROVE, Wis. (AP) — Patrick Proctor Brown says the war in Afghanistan was lost within a year of its start. The suburban Milwaukee lawyer, who was an infantry captain in Iraq, said the trillions of dollars spent and the thousands of lives lost, including a lieutenant he trained with, make it “a tragedy.”

“And the Taliban will be back in power in a year,” said Brown, 35, who also studied diplomacy at Norwich, a military university in Vermont. “It’s insane.”

Brown supports President Joe Biden’s decision to withdraw all troops from Afghanistan by Sept. 11, and by voting for the Democrat, he represents a subtle but potent shift in the voting behavior of some in the military.

Voters who served in the military have long leaned toward Republicans. But there are signs that Biden may have cut into that advantage last year. Biden carried several counties with large military communities — as well as the most concentrated military congressional district last year — that former President Donald Trump and previous Republican presidential nominees counted on for decades.

Veteran groups and pollsters attribute Biden’s gains to a handful of factors, including an increase in female, Black, Latino and college-educated service members, all keys to the Democratic coalition.

But strategists also point to the stark contrast in Biden’s and Trump’s approaches to the military. Biden, the father of an Iraq War veteran, often closes his speeches with a short prayer for US troops. Trump, meanwhile, was quick to praise veterans in public, but also made Islamophobic attacks on the parents of a US soldier killed in Iraq — a Gold Star family — and made comments mocking American war dead.

The contrast raises the question of whether Democrats’ fledgling momentum with military voters is more than a momentary anti-Trump blip. It also heaps pressure on Biden to fulfill policy promises and perfect the political outreach to veterans getting underway.

“This president has got to end these wars,” said Jon Soltz, a former Army tank captain who formed the Democratic-leaning VoteVets.org in 2006. “He’s got to fulfill some of these promises. There’s a war-weariness in the military.”

Results from around the country last year suggest Biden has an edge with some military voters unlike his recent predecessors.

Among several military-leaning spots on the national map, Biden carried Virginia’s 2nd Congressional District, which contains the most active duty and veteran service members in the country. It includes the world’s largest naval base, Naval Station Norfolk, and is home to more than 110,000 active and retired service members. Trump won the district in 2016, as did Republicans Mitt Romney in 2012 and John McCain in 2008.

Biden also flipped New Hampshire’s Rockingham County, home of Portsmouth and the U.S. Navy’s oldest continuously operating shipyard. He was also the first Democrat ever to carry Riley County, Kansas. It’s the home of Kansas State University, but also Fort Riley Army base, where the National Bio Defense research has drawn an educated and racially and ethnically diverse military workforce.

“In all of the data we saw, Biden was doing better with veterans and active duty,” than previous Democratic nominees going back decades, said Celinda Lake, one of the Biden campaign’s two main pollsters. “And the campaign was very active in targeting veterans, including talking about his son being a veteran of the current engagements, and that resonated with active military and veterans.”

Early in the 2020 campaign, aides recognized the former vice president’s unique profile as a potential commander in chief. Having been to Iraq and Afghanistan dozens of times as vice president and, before that, a longtime member of the Senate Foreign Relations Committee, he also is the father of an Iraq War veteran, his late son Beau.

“We ran commander in chief ads in Iowa because we thought the country needed it,” said Greg Schultz, Biden’s campaign manager through the early 2020 primaries and caucuses. “But it was also a signal to military veterans and their families that Biden gets it.”

The Afghanistan decision is a priority for many on active duty and especially post-9/11 veterans like Brown, though there are others who served there who may think the U.S. is abandoning Afghans they worked with or who feel the sacrifices of the more than 3,500 U.S. troops who died there were in vain.

The move is a longtime promise of Biden, who advocated it as vice president, though it never happened during the eight years of the Obama administration.

“It is the responsibility of the Afghans to take care of their own security,” Biden said during a 2012 vice presidential debate, pledging that the U.S. would be gone in two years. “We’ve been in this war for over a decade.”

There’s no sign that veterans’ views on the war differ dramatically from other Americans’. A July 2019 Pew Research Poll found 58% of veterans said the war in Afghanistan was not worth fighting, nearly identical to the general public’s view at 59%.

VoteVets is taking actions to keep Biden’s momentum from slowing. The group has hired Schultz, Biden’s former campaign manager, as a consultant to help build a veteran voter database to improve outreach.

Beyond Trump’s insensitive remarks about some troops and their families, his decisions to abruptly withdraw U.S. troops from Syria, which left Kurdish allies unprotected, angered some military leaders. In an extraordinary rebuke after the 2020 election, all 10 living former secretaries of defense cautioned against involving the military in pursuing Trump’s false claims of election fraud, calling any such move “dangerous, unlawful and unconstitutional territory.”

Likewise, the Trump administration’s Pentagon policy barred transgender people from joining the military, while Trump was seen as doing little to distance himself from far-right racist groups at a time when the military has become more diverse.

“From a military voter point of view, it is Trumpism more than Republicanism that is off-putting,” Feaver said. “The more Trump recedes from view, the greater the attention on the problems within the Democratic coalition on national security and defense issues will be.”

VoteVets’ Soltz sees the Afghanistan decision as one that his group can cite as it promotes support for Biden in the years leading up to the next presidential election, especially as the administration moves to confront Russia and China, considered more direct threats to U.S. security.

“There is an intellectual conversation at the highest level of the military about meeting tomorrow’s demands that aren’t yesterday’s,” Soltz said. “And Afghanistan is a yesterday.”

These were the details of the news As Biden improves with vets, Afghanistan plan a plus to some for this day. We hope that we have succeeded by giving you the full details and information. To follow all our news, you can subscribe to the alerts system or to one of our different systems to provide you with all that is new.