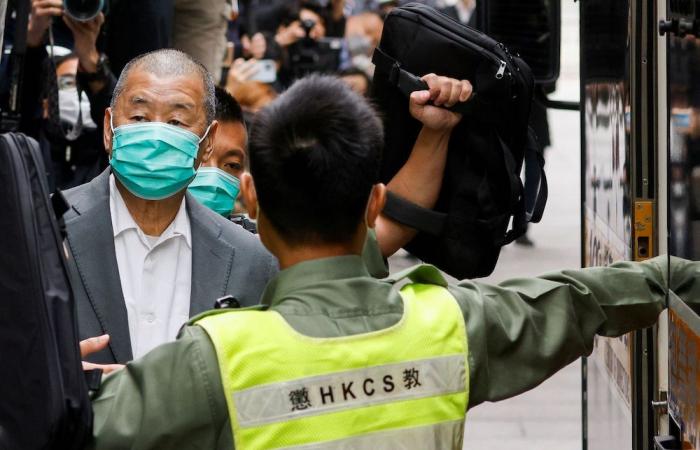 HONG KONG, Apr 17 — Hong Kong media tycoon Jimmy Lai was jailed for 14 months on last night along with four other veteran democracy activists for their roles in protests that helped trigger a sweeping crackdown on dissent by China — sentences that prompted consternation from the US, Britain and the EU.

Lai was given two jail terms for separate rallies in August 2019, at the peak of a democracy uprising that paralysed the financial hub for months.

The jail terms were the first ever for the 73-year-old millionaire, who has spent decades using his media empire to support democracy in Hong Kong, a campaign that has seen him denounced by China as a “traitor”.

The sentences last night were the latest in a relentless and successful campaign by China since the protests to silence dissent.

Lai and four other campaigners were initially sentenced for leading a rally that organisers said attracted up to 1.7 million people.

Nine of Hong Kong’s most prominent democracy campaigners had been found guilty of organising and participating in it.

Many of them have spent decades advocating non-violence in their ultimately fruitless campaign for universal suffrage.

Among the other defendants was Martin Lee, 82, a respected barrister known as the “father of democracy” in Hong Kong, who was once chosen by Beijing to help write the city’s mini-constitution.

Lee and Ng were given prison terms, but their sentences were suspended.

The rallies in 2019 often descended into clashes between riot police and a knot of hardcore participants, and posed the most concerted challenge to China’s rule since the former British colony’s 1997 handover.

Lai was handed his second jail term yesterday for participating in another rally in August that descended into chaos and violent clashes between protesters and police.

Although he was jailed for eight months for that offence, part of the term will be served concurrently with the earlier sentence. In total he will have to serve 14 months in jail.

China and the city government have successfully silenced the democracy movement with a sweeping crackdown featuring a national security law that criminalises dissent.

They have also pressed a radical overhaul of the city’s electoral system to ensure only “patriots” are members of the legislature.

The United States decried the sentencings on what it called “politically motivated” charges” and again accused Beijing of denying Hong Kongers freedoms they were promised when Britain handed the former colonial territory back to China.

“We will continue to stand with Hong Kongers as they respond to Beijing’s assault on these freedoms and autonomy,” Secretary of State Antony Blinken said in a statement.

London called on Beijing to stop prosecuting pro-democracy campaigners, while the European Union said the prison sentences would have an impact on the bloc’s ties with China.

“These developments in Hong Kong call into question China’s will to uphold its international commitments,” said the office of the EU’s top foreign policy official Josep Borrell.

Before delivering the sentences on the initial charge of leading the massive rally, judge Amanda Woodcock said the event was “premeditated” to “circumvent” a police ban.

She also said the fact that the rally was peaceful was no defence.

“The Basic Law guarantees freedom of assembly and procession -- however, these rights are not absolute and are subject to restrictions,” Woodcock said.

Supporters of the defendants rose and waved to the nine in court as they were taken away after the sentencing.

“Support you until the last,” they chanted.

In comments to the court before the sentencing, Ng maintained a defiant tone.

“There is no right so precious to the people of Hong Kong as the freedom of expression and the freedom of peaceful assembly,” said Ng, who discharged her legal team and gave her statement in person.

She added that she was prepared to stand with and stand up for the people who “in the last resort, had to give collective expression of their anguish and urge the government to respond”.

“I stand the law’s good servant but the people’s first,” said Ng, whose submission ended with a round of loud applause in the courtroom.

“I’m ready for the sentencing and I’m proud that I can walk with the people of HK in this road for democracy,” former lawmaker Lee Cheuk-yan said outside court ahead of the hearing.

“We’ll walk together through the storm even in darkness.”

Lee was sentenced to 14 months in jail for his participation in both rallies. — AFP

These were the details of the news Jimmy Lai among five Hong Kong democracy activists jailed for this day. We hope that we have succeeded by giving you the full details and information. To follow all our news, you can subscribe to the alerts system or to one of our different systems to provide you with all that is new.