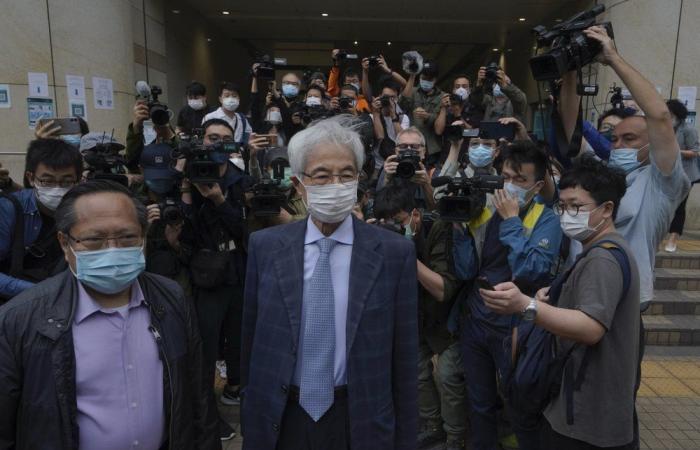 Mohamed Nass - Cairo - HONG KONG (AP) — A Hong Kong court on Friday sentenced five leading pro-democracy advocates, including media tycoon Jimmy Lai, to up to 18 months in prison for organizing and participating in a massive march during 2019 anti-government protests that triggered an overwhelming crackdown from Beijing.

A total of nine advocates were given jail terms, but four of them, including 82-year-old lawyer and former lawmaker Martin Lee, had their sentences suspended after their age and accomplishments were taken into consideration.

They were found guilty earlier this month of organizing and participating in a massive protest in August 2019, where an estimated 1.7 million people marched in opposition to a bill that would have allowed suspects to be extradited to mainland China. The march was not authorized by the police.

Their convictions and sentencing are another blow to the city’s flagging democracy movement, which is facing an unprecedented crackdown by Beijing and Hong Kong authorities. The sentences were swiftly met with international criticism.

The court suspended the 11-month prison sentence of Lee, who is known for his advocacy for human rights and democracy, for two years because of his age.

Lai, the founder of Hong Kong’s Apple Daily tabloid, was sentenced to a total of 14 months in prison Friday for charges related to demonstration on August 18, 2019, and a separate unauthorized march on August 31, 2019.

Lai was also slapped with two additional charges Friday, one under the national security law accusing him of conspiring to collude with foreign powers and another accusing him of helping local activists to escape the city.

Prior to sentencing, Lai was already being held on other charges, including a previous charge of foreign collusion to intervene in the city’s affairs — a new crime under a sweeping national security law that Beijing imposed on the city in 2020.

Lee Cheuk-yan, a pro-democracy activist and former lawmaker who helped organize annual candlelight vigils in Hong Kong on the anniversary of the bloody crackdown on pro-democracy protests in Beijing’s Tiananmen Square in 1989, was sentenced to a total of 14 months in prison for his participation in the the two August 2019 marches.

Lawyers Albert Ho and Margaret Ng both had their 12-month jail sentences suspended for two years. Former lawmaker Leung Kwok-hung was sentenced to 18 months, while another former legislator, Cyd Ho, was given a jail sentence of eight months.

Two other former lawmakers, Au Nok-hin and Leung Yiu-chung, who previously pleaded guilty, were also given jail sentences. Au got 10 months while Leung’s eight-month jail term was suspended for one year.

In a separate case, former lawmaker Yeung Sum, was sentenced alongside Lai and Lee Cheuk-yan for their participation in the unauthorized assembly on Aug. 31, 2019, although his eight-month sentence was suspended for a year.

“I’m ready to face the penalty and sentencing and I’m proud that I can walk with the people of Hong Kong for this democracy,” Lee Cheuk-yan said ahead of the court session, as supporters held up signs condemning political persecution. “We will walk together even in darkness, we will walk with hope in our hearts.”

Hong Kong had enjoyed a vibrant political culture and freedoms not seen elsewhere in China during the decades it was a British colony.

Beijing had pledged to allow the city to retain civil liberties for 50 years after it was handed to Chinese rule in 1997, but recently has ushered in a series of measures, including the national security legislation and electoral reforms that many fear are a step closer to making Hong Kong no different from mainland cities.

Under the new rules, Hong Kong residents can be held liable for any speech or action deemed secessionist, subversive, terrorist or perceived as colluding with hostile foreign political groups or individuals. Electoral changes mean just 20 out of 90 Legislative Council members will be directly elected and Beijing will retain even tighter control over the body that picks Hong Kong’s future chief executives.

“This week, we have witnessed some of the most distinguished of the city’s peaceful and moderate champions of liberty and democracy placed in Beijing’s vengeful sights,” he said in a statement. “The CCP simply does not understand that you cannot bludgeon and incarcerate people into loving a totalitarian and corrupt regime.”

“Having arrested the majority of Hong Kong’s most prominent dissidents using the repressive national security law, the authorities are now mopping up remaining peaceful critics under the pretext of bogus charges related to the 2019 protests,” Mishra said.

These were the details of the news Hong Kong democracy leaders given jail terms amid crackdown for this day. We hope that we have succeeded by giving you the full details and information. To follow all our news, you can subscribe to the alerts system or to one of our different systems to provide you with all that is new.