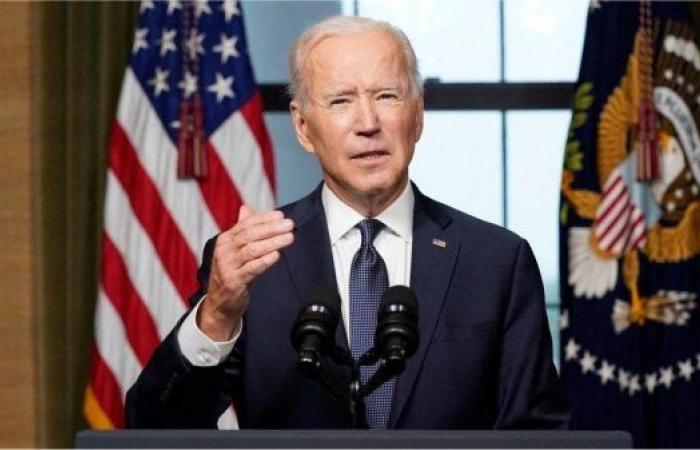 Hind Al Soulia - Riyadh - WASHINGTON — The US administration led by President Joe Biden targeted Russia with sweeping sanctions and diplomatic expulsions Thursday, punishing Moscow for its interference in the 2020 US election, its SolarWinds cyberattack and its ongoing occupation and "severe human rights abuses" in Crimea.

The announcement is one of a series of dramatic foreign policy steps that Biden has taken this week, along with the decision to withdraw all troops from Afghanistan and send an unofficial delegation to Taiwan to express support for its democracy and security, in what may signal a turn toward a tougher, more pragmatic posture for the US globally.

Thursday's sanctions come a day after Secretary of State Antony Blinken, speaking for the US and its NATO allies, expressed deep concerns about Russia's military build-up along the border with Ukraine, and two days after the US intelligence community said in an annual report that Russia "presents one of the most serious intelligence threats to the United States."

As part of Thursday's announcement, the US formally named the Russian Foreign Intelligence Service as the force behind the SolarWinds hack that affected the federal government and wide swaths of the private sector. The White House also said that it is expelling 10 Russian diplomats in Washington, including "representatives of Russian intelligence services," for the cyber hack and the election meddling.

National security adviser Jake Sullivan told CNN's John Berman on "New Day" that Biden was aiming to strike a balance as he responded to the array of Russian aggression and "provide a significant and credible response, but not escalate the situation."

Biden, who spoke to President Vladimir Putin by phone on Tuesday to preview the sanctions, "made no bones about the fact we will be taking actions this week, but he also indicated that he wants to get to that stability in this relationship, and he believes that if President Putin is prepared to do that as well, we can find a course ahead that does not lead to a cycle of confrontation," Sullivan said.

Sullivan said Biden and Putin "were direct with one another, they understood one another" during the call, and proposed that he and the Russian leader should hold a summit "to discuss all of the issues facing our relationship."

Biden believes the US and Russia can have a "stable and predictable relationship" and work together on issues such as arms control, Sullivan said.

"We believe that all together both the actions we are taking today and that broader diplomacy can produce a better set of outcomes for US-Russia relations," Sullivan said.

CNN previously reported the Biden administration was expected to announce sanctions as soon as Thursday targeting Russian individuals and entities, in addition to new financial restrictions and the expulsion of as many as a dozen Russian diplomats from the US, in response to the hack of SolarWinds and election interference, according to two sources familiar with the plans.

The sanctions rollout has taken longer than anticipated because the White House was not satisfied with the options the State Department initially presented and wanted more expansive measures, a US official familiar with the plans said. During Biden's first week in office, the White House announced it would be undertaking an intelligence review of Russia's "reckless and adversarial actions" in a wide variety of areas.

The administration rolled out the sanctions in an executive order in coordination with the State Department and the Treasury Department. State Department officials have called US allies and are preparing for potential Russian responses.

The Russian diplomats who are being expelled are based in Washington, D.C., and New York, and they will have 30 days to leave the country, the US official familiar with the plans explained.

It is unclear if these sanctions will be enough to change Russian behavior, the officials said.

The Biden administration vowed early on to respond to Russia's aggressions against the US and its allies.

During his first phone call with Putin in March, Biden confronted the Russian leader over a range of issues, from the recent massive cyberattack to the suspected poisoning of the country's leading opposition figure, Alexey Navalny. The Biden administration has already rolled out sanctions for Navalny's jailing and poisoning.

Even as it hits back at Russia, the Biden administration has sought to keep open channels of diplomatic communication and to work with Russia when it is in the US' interest. The Biden administration recently decided to keep the Trump-appointed US ambassador on the job in Moscow for the foreseeable future, and the president has invited Putin to a climate change conference later this month as well as the summit to discuss US-Russia relations. — Courtesy CNN


These were the details of the news Biden imposes new sanctions on Russia over election interference and cyber hacks for this day. We hope that we have succeeded by giving you the full details and information. To follow all our news, you can subscribe to the alerts system or to one of our different systems to provide you with all that is new.