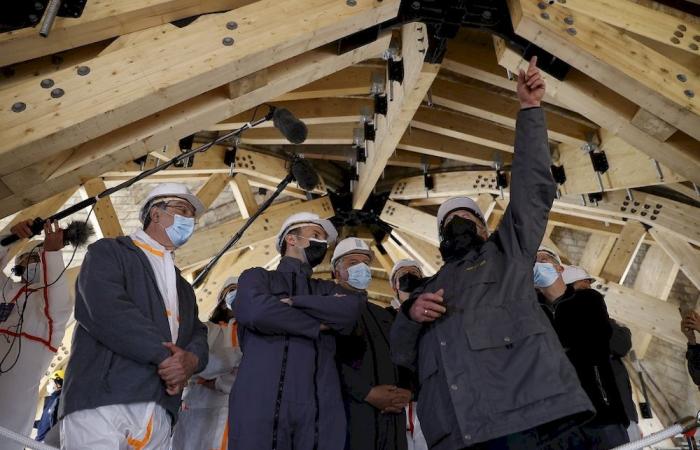 Visiting Notre-Dame two years to the day after the world watched transfixed in horror as flames ravaged the cathedral, Macron said “immense” restoration work had already been accomplished since the blaze.

“We are also looking to the three coming years because we will have to meet our targets, and therefore there is a great mobilisation of planning that is very demanding and rigorous,” he said.

While the spire collapsed and much of the roof was destroyed on the evening of April 15, 2019, the efforts of firefighters ensured the great medieval edifice survived the night.

Macron set a five-year restoration target in the immediate aftermath of the fire, which would mean the cathedral could be visited again when Paris hosts the 2024 summer Olympics.

He reiterated the objective a year later, despite delays brought on by the Covid-19 pandemic.

While Notre-Dame will be reopened for worship in April 2024, restoration work will actually have to continue beyond that date, according to Jean-Louis Georgelin, a former general handpicked by Macron to lead the effort.

The rebuild is helped by some €833 million (US$991 million) collected in a national and international donation campaign launched immediately after the fire, although this may not be enough to push the restoration over the finishing line.

The interior of the cathedral is today marked by a web of scaffolding, surrounded by nets and tarpaulins, where carpenters, rope workers, scaffolders and crane operators hurry around.

Meanwhile, investigators are trying to shed more light on the causes of the fire.

Several shortcomings in the security of the cathedral were identified — in particular in the alarm system which meant that the alert to firefighters was late — and in the electrical system of one of the elevators.

An accident, possibly caused by a short circuit or discarded cigarette butt, remains a likely explanation, but the extent of the damage has made drawing any final conclusions impossible. — AFP

These were the details of the news Macron says ‘mobilisation’ key to Notre-Dame rebuild target for this day. We hope that we have succeeded by giving you the full details and information. To follow all our news, you can subscribe to the alerts system or to one of our different systems to provide you with all that is new.