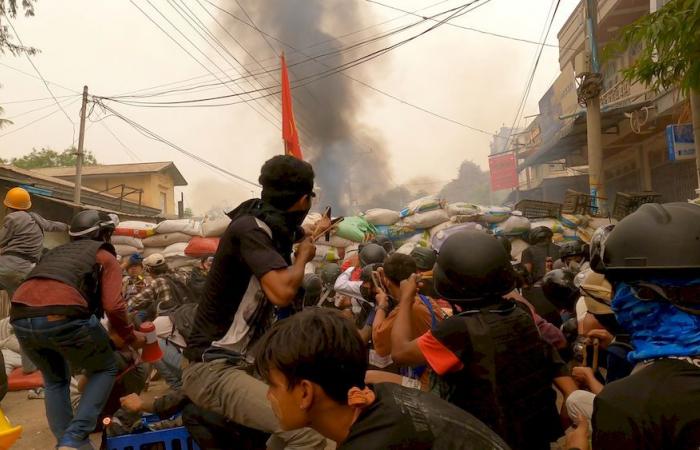 APRIL 15 — Myanmar security forces arrested today one of the main leaders of the campaign against military rule after driving into him with a car as he led a motorbike protest rally, friends and colleagues said.

Opponents of a Feb. 1 coup that ousted an elected government led by Nobel peace laureate Aung San Suu Kyi have kept up their campaign against the military this traditional New Year week with marches and various other displays of resistance.

“Our brother Wai Moe Naing was arrested. His motorbike was hit by a private car of the police,” Win Zaw Khiang, a member of a protest organising group, said on social media.

Wai Moe Naing, a 25-year-old Muslim, has emerged as one of the most high-profile leaders of opposition to the coup.

Reuters was not able to contact Wai Moe Naing by telephone. Earlier, Reuters spoke to him as he set off to lead the rally in the central town of Monywa, about 700 km (435 miles) north of the main city of Yangon.

Video posted on social media showed an oncoming car swerving into a group of motorbikes. Reuters was not able to verify the footage.

Monywa has been one of main centres of the pro-democracy campaign with big rallies day after day and repeated crackdowns by the security forces.

Some colleagues said they feared for Wai Moe Naing’s safety in detention.

“We have to continue the fight by doubling our energy for Ko Wai Moe Naing, for the truth, for the present and future of the country,” another leader, Tayzar San, said on Facebook.

Earlier today, soldiers opened fire in the city of Mandalay to disperse protesting medical workers and one man was killed and several wounded when security forces fired in a nearby neighbourhood, media reported.

Medical workers, some of whom have been at the forefront of the campaign against the coup, gathered early in the second city but troops soon arrived, opening fire and detaining some people, witnesses and the BBC’s Burmese-language service said.

The BBC and other news outlets did not have details of casualties or arrests at the protest but Khit Thit media said a man was shot and killed in the compound of a nearby mosque as security forces broke up the medics’ protest.

“There was no protest here. The soldiers came and seemed to be searching for someone,” a resident of the neighbourhood where the mosque is located, who declined to be identified, said by telephone.

The five-day New Year holiday, known as Thingyan, began on Tuesday but pro-democracy activists cancelled the usual festivities to focus on their opposition to the generals.

Hundreds of people joined protests marches and motorbike rallies in several towns, according to pictures posted by media outlets.

The coup has plunged Myanmar into crisis after 10 years of tentative steps toward democracy, with, in addition to the daily protests, strikes by workers in many sectors that have brought the economy to a standstill.

An activist group, the Assistance Association for Political Prisoners, says the security forces have killed 715 protesters since the ousting of Suu Kyi’s government.

The military says the protests are dwindling but the state-run Global New Light of Myanmar newspaper reported that “rioters” had been committing an increasing number of “terrorist acts”, attacking security forces with grenades, planting “homemade mines” and starting fires.

The coup has also led to an increase in clashes between the military and ethnic minority forces fighting for autonomy in border regions, in particular in the east and north, where the military has been launching air strikes.

Government forces had suffered heavy casualties in an assault on ethnic Kachin insurgents in the north this week, the Myanmar Now and Democratic Voice of Burma media groups reported. — Reuters

These were the details of the news Myanmar security forces arrest prominent leader of campaign against coup for this day. We hope that we have succeeded by giving you the full details and information. To follow all our news, you can subscribe to the alerts system or to one of our different systems to provide you with all that is new.