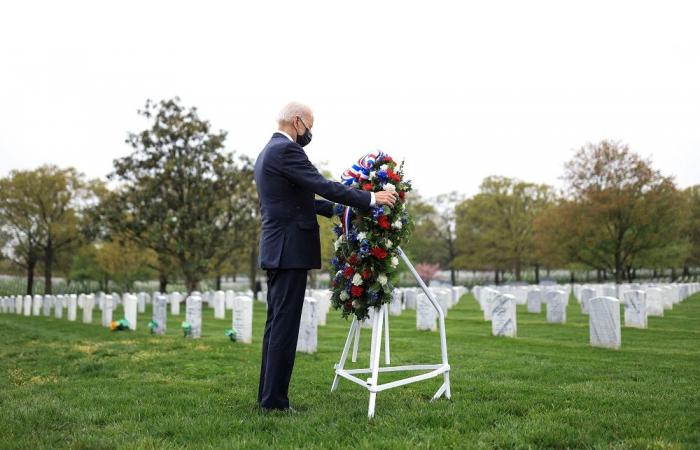 Hello and welcome to the details of Standing among US graves, Biden explains Afghanistan decision in personal terms and now with the details

WASHINGTON, April 15 ― As President Joe Biden stood in the rain yesterday among the tombstones of US soldiers killed in Afghanistan, thoughts of his late son Beau were not far from his mind as he explained his decision to begin America's exit from its longest war.

The president's elder son earned the Bronze Star while serving in Iraq from 2008-09. His death in 2015 from a brain tumor still haunts his father.

“I have trouble these days ever showing up at a cemetery not thinking of my son Beau, who proudly insisted on putting on that uniform and going with his unit to Iraq and giving up his spot as attorney general in the state of Delaware because he thought it was the right thing to do,” Biden told reporters at Arlington National Cemetery outside Washington.

“Look at them all,” Biden said, gesturing to the rows of white gravestones stretching behind him.

Beau Biden's military experience was among the reasons the president gave for deciding to withdraw all 2,500 US troops remaining in Afghanistan by September 11 in a televised speech before the cemetery visit.

“I’m the first president in 40 years who knows what it means to have a child serving in a war zone,” Biden said, speaking from the Treaty Room at the White House, where President George W. Bush declared the beginning of the war in 2001.

“Throughout this process, my North Star has been remembering what it was like when my late son Beau was deployed to Iraq,” Biden said, and the impact it had on Beau and his family.

Biden said that since he became vice president in 2009, he had carried a card of the exact number of US troops and personnel killed and wounded in Iraq and Afghanistan ― 2,488 dead in Afghanistan and 20,722 wounded as of yesterday.

“Every one of those dead are sacred human beings who left behind entire families,” he said.

The war in Afghanistan began as a search for al-Qaeda leader Osama bin Laden after he masterminded the September 11, 2001, attacks on the United States that turned Bush into a war president.

US troop numbers in Afghanistan reached a peak of more than 100,000 in 2011. Afghan security forces are fighting an insurgency by the Islamist Taliban.

A full withdrawal by September 11 made sense, Biden said yesterday, because the original mission - getting bin Laden - had been achieved, and Afghanistan was no longer a safe haven for Islamist militants like him. Bin Laden was killed in Pakistan by American forces in 2011.

“We already have service members doing their duty in Afghanistan today whose parents served in the same war. We have service members who were not yet born when our nation was attacked in 9/11,” Biden said in his speech, adding the war was never meant to be a multi-generational affair.

Was it a hard decision? Biden was asked in Arlington.

These were the details of the news Standing among US graves, Biden explains Afghanistan decision in personal terms for this day. We hope that we have succeeded by giving you the full details and information. To follow all our news, you can subscribe to the alerts system or to one of our different systems to provide you with all that is new.