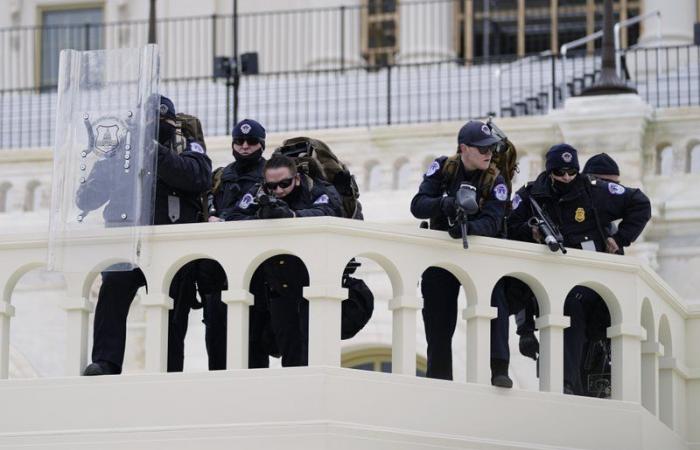 You are now following the details of the Report: Broad missteps left Capitol Police unprepared Jan. 6 news and now we leave you with the details

Mohamed Nass - Cairo - WASHINGTON (AP) — A blistering internal report by the US Capitol Police describes a multitude of missteps that left the force unprepared for the Jan. 6 insurrection — riot shields that shattered upon impact, expired weapons that couldn’t be used, inadequate training and an intelligence division that had few set standards.

The watchdog report released internally last month, obtained by The Associated Press ahead of a congressional hearing Thursday, adds to what is already known about broader security and intelligence failures that Congress has been investigating since hundreds of President Donald Trump’s supporters laid siege to the Capitol.

In an extensive and detailed timeline of that day, the report describes conversations between officials as they disagreed on whether National Guard forces were necessary to back up the understaffed Capitol Police force. It quotes an Army official as telling then-Capitol Police Chief Steven Sund that “we don’t like the optics of the National Guard standing in a line at the Capitol” after the insurrectionists had already broken in.

Inspector General Michael A. Bolton found that the department’s deficiencies were — and remain — widespread. Equipment was old and stored badly, leaders had failed to act on previous recommendations to improve intelligence, and there was a broad lack of current policies or procedures for the Civil Disturbance Unit, a division that existed to ensure that legislative functions of Congress were not disrupted by civil unrest or protest activity. That was exactly what happened on Jan. 6 as Trump’s supporters sought to overturn the election in his favor as Congress counted the Electoral College votes.

The report comes as the Capitol Police force has plunging morale and has edged closer to crisis as many officers have been working extra shifts and forced overtime to protect the Capitol after the insurrection. Acting Chief Yogananda Pittman received a vote of no confidence from the union in February, reflecting widespread distrust among the rank and file.

The entire force is also grieving the deaths of two of their own — Officer Brian Sicknick, who collapsed and died after engaging with protesters on Jan. 6, and Officer William “Billy” Evans, who was killed April 2 when he was hit by a car that rammed into a barricade outside the Senate. Evans laid in honor in the Capitol Rotunda on Tuesday.

The Capitol Police have so far refused to publicly release the report — marked throughout as “law enforcement sensitive” — despite congressional pressure to do so. House Administration Committee Chairwoman Zoe Lofgren, D-Calif., issued a statement in March that she had been briefed on the report, along with another internal document, and that it contained “detailed and disturbing findings and important recommendations.“ Bolton was expected to testify before her panel on Thursday.

The report focuses heavily on failure of equipment and training Jan. 6 as Capitol Police were quickly overwhelmed by around 800 of Trump’s supporters who pushed past them, beat them and broke windows and doors to get into the building. It also looks at missed intelligence as the insurrectionists planned the attack openly online, and as various agencies sent warnings that were disseminated incorrectly.

Bolton found that in many cases department equipment had expired but was not replaced and some of it was more than 20 years old. Riot shields that shattered upon impact as the officers fended off the violent mob had been improperly stored, Bolton found. Some weapons that could have fired tear gas were so old that officers didn’t feel comfortable using them. Other weapons that could have done more to disperse the crowd were never staged ahead of the rally, and those who were ordered to get back-up supplies to the officers on the front lines could not make it through the aggressive crowd.

In other cases, weapons weren’t used because of “orders from leadership,” the report says. Those weapons — called “less lethal” because they are designed to disperse, not kill — could have allowed the police to better push back the rioters as they moved toward the building, according to the report.

In terms of the Civil Disturbance Unit, the report said there was a total lack of policy and procedure, and many officers didn’t want to be a part of it. There were not enough guidelines for when to activate the unit, how to issue gear, what tactics to use or lay out the command structure. Some of the policies hadn’t been updated in more than a decade and there was no firm roster of who was even in the division. The unit was at a “decreased level of readiness and preparedness” because there were no standards for equipment, the report said.

Bolton also laid out many of the missed intelligence signals — including a report prepared by the Department of Homeland Security in December that forwarded messages posted on forums supportive of Trump that appeared to be planning for Jan. 6. One part of that document included a map of Capitol tunnels that someone had posted. “Take note,” the message said.

The report looks at a missed memo from the FBI in which online activists predicted a “war” on Jan. 6 — Sund told Senate investigators last month he never saw it. Bolton also details the force’s own internal reports, which he said were inconsistent. One Capitol Police report predicted that the protesters could become violent, but Sund testified before the Senate in February that internal assessments had said violence was “improbable.”

On intelligence, Bolton said, there was a lack of adequate training and guidance for dissemination within the department. There were no policies or procedures for open source data gathering — such as gathering information from the online Trump forums — and analysts “may not be aware of the proper methods of conducting open source intelligence work.”

A timeline attached to the report gives a more detailed look at Capitol Police movements, commands and conversations as the day unfolded and they scrambled to move staff and equipment to multiple fronts where people were breaking in.

The timeline sheds new light on conversations in which Sund begged for National Guard support. Sund and others, including the head of the D.C. National Guard, have testified that Pentagon officials were concerned about the optics of sending help.

The document gives the clearest proof of that concern yet, quoting Army Staff Secretary Walter Piatt telling Sund and others on a call that “we don’t like the optics” of the National Guard at the Capitol and he would recommend not sending them. That was at 2:26 p.m., as rioters had already broken through windows and as Sund desperately asked for the help.

The Pentagon eventually approved the Guard’s presence, and Guard members arrived after 5 p.m. While they were waiting, Sund also had a teleconference with Vice President Mike Pence, the timeline shows. Pence was in a secure location in the Capitol because he had overseen the counting of the votes, and some of the rioters were calling for his hanging because he had indicated he would not try to overturn President Joe Biden’s election win.

The AP reported Saturday that Pence also had a conversation that day with acting Defense Secretary Christopher Miller in which he directed that he “Clear the Capitol.”

These were the details of the news Report: Broad missteps left Capitol Police unprepared Jan. 6 for this day. We hope that we have succeeded by giving you the full details and information. To follow all our news, you can subscribe to the alerts system or to one of our different systems to provide you with all that is new.